Please ensure Javascript is enabled for purposes of website accessibility
Log In Help Join The Motley Fool
Free Article Join Over 1 Million Premium Members And Get More In-Depth Stock Guidance and Research
By Howard Smith - Mar 16, 2020 at 10:02AM

In a company release on Saturday, American Airlines said that due to lower customer demand from the COVID-19 crisis, it was reducing international flights out of the United States by 75% through May 6, 2020. United Airlines separately released a statement saying today it will announce approximately 50% capacity reductions for April and May. These cuts follow Delta's announcement last week that it would reduce capacity by 40%. 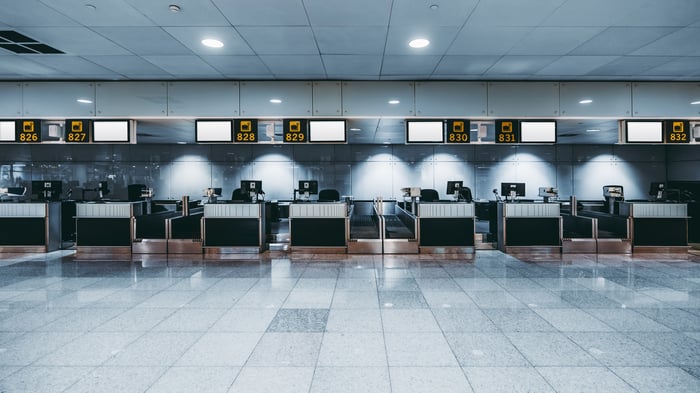 Extending into the summer

United also announced that, based on the current situation, it expects its deep cuts to last into the summer travel period. It added, "Even with those cuts, we're expecting load factors to drop into the 20-30% range -- and that's if things don't get worse."

American also went beyond just the international cuts, announcing that it anticipates domestic capacity to be reduced by about 20% in April and 30% in May, versus the same periods last year.

On March 5, 2020, the airline trade association, International Air Transport Association (IATA), estimated that there could be up to $113 billion in lost revenue from passenger airlines alone, in one "extensive spread" scenario of the coronavirus. The group has not yet updated that estimate.

In addition to capacity reductions, airlines have imposed other measures, including hiring freezes and executive salary cuts, in efforts to prepare to weather the crisis. The industry may get government assistance as well. Speaking to reporters Friday, U.S. Treasury Secretary Steven Mnuchin said the Trump administration was prepared to assist the domestic industry with needed liquidity.