Please ensure Javascript is enabled for purposes of website accessibility
Log In Help Join The Motley Fool
Free Article Join Over 1 Million Premium Members And Get More In-Depth Stock Guidance and Research
By Leo Sun - Mar 16, 2020 at 11:40AM

The wearables maker’s shipments surged 60% annually in a crowded market.

Those robust growth rates suggest that Huami, which produces Xiaomi's (XIACF -1.15%) wearables, Timex's smartwatches, and its own Amazfit devices, is a much stronger company than Fitbit (FIT), which posted a 12% revenue decline and a net loss last quarter as it waited for Alphabet's Google to close its $2.1 billion takeover. 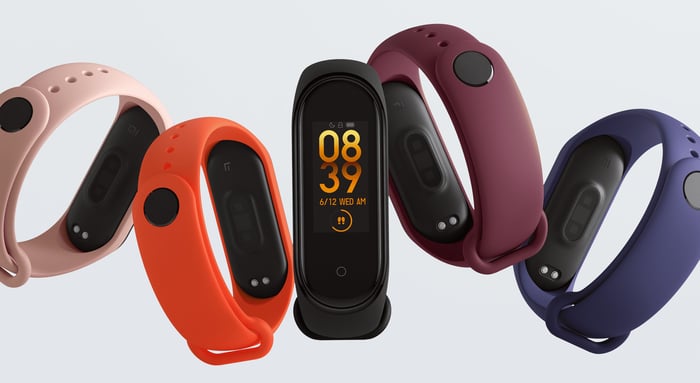 Huami's stock rallied nearly 30% since its IPO in early 2018, but it still looks cheap at 10 times forward earnings. Is Huami a worthy investment at these levels, or will the stock suffer the same fate as Fitbit, which trades nearly 70% below its IPO price?

How Huami differs from Fitbit

Huami isn't a familiar name to most investors, but its Xiaomi-branded devices controlled 10.8% of the global wearables market during the fourth quarter of 2019, according to IDC. That put it in second place after Apple (AAPL 1.62%), which held a 36.5% share. Fitbit, which once led the market, ranked a distant fifth with a 5% share.

Xiaomi owns nearly a fifth of Huami, and Xiaomi CEO Lei Jun personally owns another fifth. Xiaomi covers all of Huami's design, manufacturing, marketing, and distribution costs for its Xiaomi-branded products, while Huami covers the operating expenses for Timex's upcoming smartwatches and its own Amazfit devices.

This unusual arrangement significantly reduces Huami's operating expenses, but its profits would plummet if Xiaomi ever stopped selling wearables or subsidizing Huami's expenses.

Huami's growth in revenue and shipments follows the cyclical launches of Xiaomi's devices and its own Amazfit products. Both figures accelerated significantly in the second half of the year, thanks to strong sales of Xiaomi's Mi Band 4.

But the Mi Band 4, which costs less than $30, is sold at lower margins than Huami's own Amazfit products, which cost $70 to $180. A higher mix of Mi Bands during the quarter reduced Huami's gross and operating margins both sequentially and annually.

But during the conference call, CFO David Cui declared that Huami's gross margin will remain "relatively stable" as it launches new Amazfit products and its first Timex smartwatch, the Ironman R300. Those new devices should cushion its margins from Xiaomi's upcoming launch of the Mi Band 5 in the second half of 2020.

Huami will also continue expanding its digital healthcare presence with investments and partnerships across smart devices, AI chips, and cloud services, which could gradually reduce its dependence on Xiaomi's sprawling ecosystem.

A limited impact from the novel coronavirus outbreak

Cui noted Huami's sales in Western Europe would likely be affected as the outbreak continued, but expressed confidence that "2020 will be another successful year" for the company, with "sustainable growth and profitability."

That stable outlook -- along with Xiaomi's consistent support, its expanding lineup of first-party products, and low valuation -- all suggest that Huami is an undervalued growth stock. It still faces tough challenges from Apple and other wearables makers, but it should have a much brighter future than Fitbit.

The "Fitbit of China" Is Still Putting Fitbit to Shame