That's essentially double the losses for the broader stock market, on what's looking like it could be the worst day for stocks since either last Thursday or -- more likely at this point -- in more than three decades. 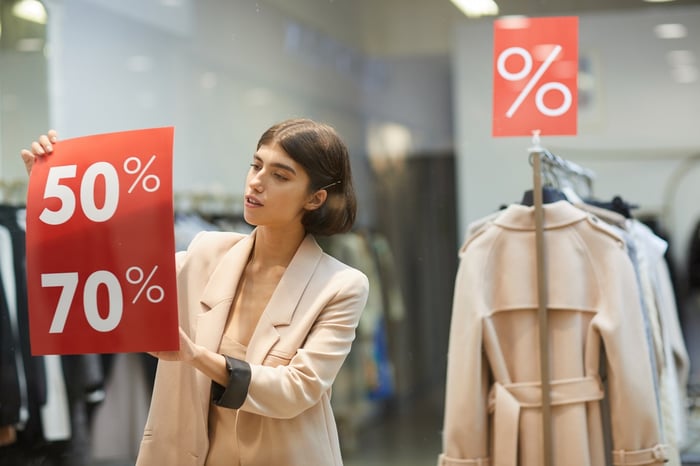 Today's massive market sell-off, which is sending these discount retailers down even further, is being fueled by accelerated fears that the coronavirus pandemic is having a much bigger impact on the global economy than expected. Over the weekend, the U.S. Federal Reserve announced actions it was taking to stimulate the economy and make sure the financial system continues functioning.

The first move was to cut interest rates, a surprising decision considering the Fed lowered rates only a couple of weeks ago, to reduce the overnight lending rate by a further 100 basis points, putting it essentially at zero. This move should give banks access to additional capital at rates that make more lending possible.

Additionally the Fed said it would inject an additional $700 billion into the market, buying both Treasuries and mortgage-backed securities in order to provide the necessary liquidity to keep debt markets from freezing up due to lack of capital.

Where do Burlington, Ross, and TJX Companies come into this? In short, investors view the Fed's drastic actions as clear indicators that the economy is on the cusp of recession, and that more pain could come as COVID-19 cases increase.

At this writing, more than half of America's schools are now closed and state governments are ordering restaurants and bars to either close or significantly limit dine-in services, banning large public gatherings, and taking other aggressive steps to limit the spread of the virus. Moreover, individuals are heeding the advice of healthcare professionals and self-quarantining, or significantly reducing how much time they spend in public and purchasing only necessary items.

And that's certainly bad for discount retailers like these three. Since stocks started falling in late February, these three have lost between 33% and 42% of their value while the broader market has "only" fallen about 27%: 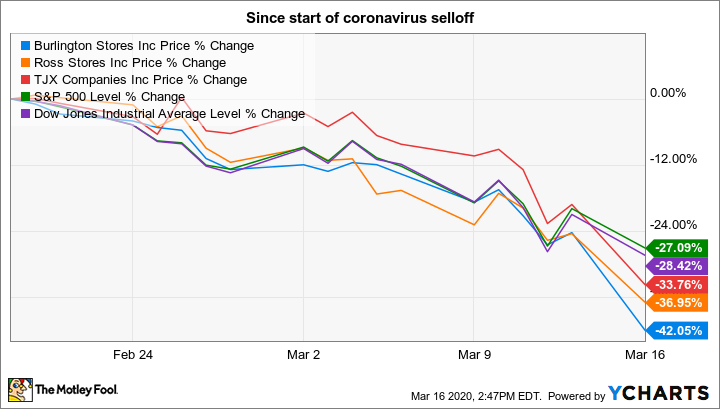 And if economic conditions worsen -- which I'm sad to say seems increasingly likely with COVID-19 cases increasing rapidly -- more quarantines and forced business closures would likely send their stocks down even more.

But here's where the bad news ends: This is creating an incredible buying opportunity for investors. As much as the next few months could be really ugly for Ross, Burlington, and TJX, things will return to normal on the other side, and all three companies have the financial strength to ride out the downturn. Both Ross and TJX carry more cash than debt, and Burlington has significant capital reserves.

So instead of joining the sellers, I think investors should put stocks like these -- good businesses with strong long-term prospects that are more beaten-down than the market -- high on their lists to buy.

Market crashes like this have proven the best time to buy stocks in the past. I don't expect this time to be any different, at least for investors who are willing and able to hold through the downturn.