Please ensure Javascript is enabled for purposes of website accessibility
Log In Help Join The Motley Fool
Free Article Join Over 1 Million Premium Members And Get More In-Depth Stock Guidance and Research
By Evan Niu, CFA - Mar 17, 2020 at 8:00AM

As antitrust scrutiny of major tech corporations intensifies around the world, Apple (AAPL 0.96%) has just been hit with a record fine of 1.1 billion euros ($1.2 billion) by the French Competition Authority over allegations of anticompetitive conduct. Regulators also imposed fines of 76.1 million euros ($84.9 million) and 63 million euros ($70.2 million) on distributors Tech Data (TECD) and Ingram Micro, respectively. 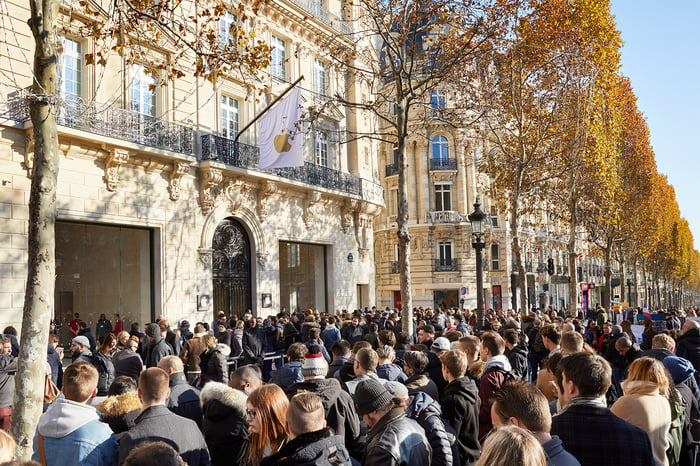 What Apple and distributors are accused of

Back in 2012, Apple reseller eBizcuss went bankrupt after over three decades in business. The company promptly filed complaints with Parisian courts and antitrust regulators, alleging that Apple was engaging in unfair practices. The French Competition Authority raided Apple's offices the following year, along with the other distribution partners.

In a statement, French Competition Authority President Isabelle de Silva says that Apple prevented distributors from competing with each other, "sterilizing the wholesale market for Apple products" in the process. Distributors also risked backlash if they offered lower prices, which had the effect of aligning retail prices of Apple products across half of the retail market, according to the agency. The Cupertino tech giant then allegedly abused its market power and favored a network of "integrated distributors."

Wholesalers Tech Data and Ingram Micro are accused of going along with all three of the anticompetitive practices instead of implementing their own policies. Smaller distributors like eBizcuss already have extremely thin margins and had an economic dependence on Apple, and French authorities consider an abuse of economic dependence to be "particularly serious."

When new products were launched, Apple would purportedly limit inventory available to some distributors while favoring its own Apple Stores and preferred wholesalers. The alleged improper practices occurred from 2005 to 2013.

As one might expect, Ingram Micro disagrees with the findings and in a release said it would "vigorously contest" the decision in the French courts. The company says the allegations are false and that the distribution market in France is "extremely competitive."

"The French Competition Authority's decision is disheartening," Apple spokesperson Josh Rosenstock told The New York Times in a statement. "It relates to practices from over a decade ago and discards 30 years of legal precedent that all companies in France rely on with an order that will cause chaos for companies across all industries." Apple will also appeal the decision.

Apple has long utilized a price maintenance strategy, exerting characteristic control over virtually every aspect of wholesale distribution with a web of confidential agreements and contractual clauses. That's why discounts at third-party resellers are often minimal.

The news comes at a precarious time for Apple, as the global economy is being rocked by the coronavirus pandemic, and recession fears grow every day.