Please ensure Javascript is enabled for purposes of website accessibility
Log In Help Join The Motley Fool
Free Article Join Over 1 Million Premium Members And Get More In-Depth Stock Guidance and Research
By Leo Sun - Mar 17, 2020 at 9:33AM

Disney's (DIS 1.84%) stock plunged more than 30% over the past month as the novel coronavirus crisis forced it to shutter its theme parks and postpone its new movie releases. The cancellation of major sporting events will likely hurt ESPN, and the resignation of longtime CEO Bob Iger exacerbated the pain.

Disney's business should recover quickly after the crisis ends, but Rosenblatt analyst Bernie McTernan recently suggested that Apple (AAPL 1.62%) should swoop in and buy the House of Mouse before its stock recovers. That idea might sound wild, but it's been floated ever since Disney bought Pixar -- then led by Steve Jobs -- in 2006. 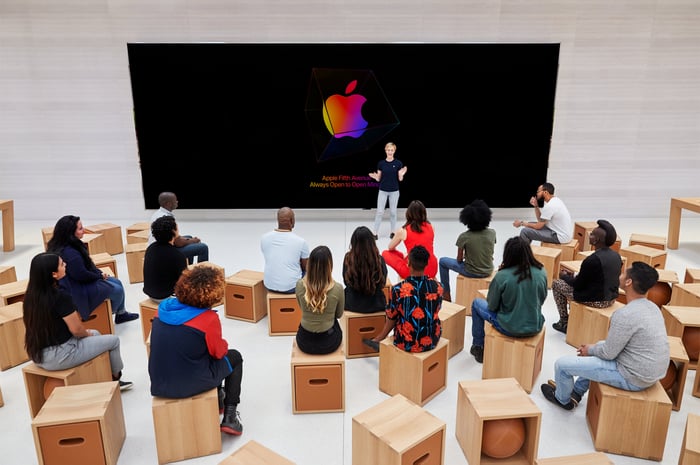 Does the math make sense?

It's doubtful that Disney's shareholders will approve a buyout at its current price. Assuming a 50% acquisition premium, which would value the stock in the low $140s, Apple would need to fork over nearly $400 billion to close the deal.

Apple would need to fund the deal with a combination of cash and stock. It will also likely need to take on additional debt to close the deal, which would boost its current liabilities of $102.2 billion.

Buying Disney in its entirety would boost Apple's annual revenue by nearly 30%. As a percentage of the combined company's 2019 revenue, Apple's iPhone sales would drop from 55% to 43%. That reduction is significant, but it doesn't completely solve Apple's overwhelming dependence on iPhone sales.

Apple also operates at higher margins than Disney, which struggled with contracting margins in recent years as cord-cutters gutted its higher-margin media business: 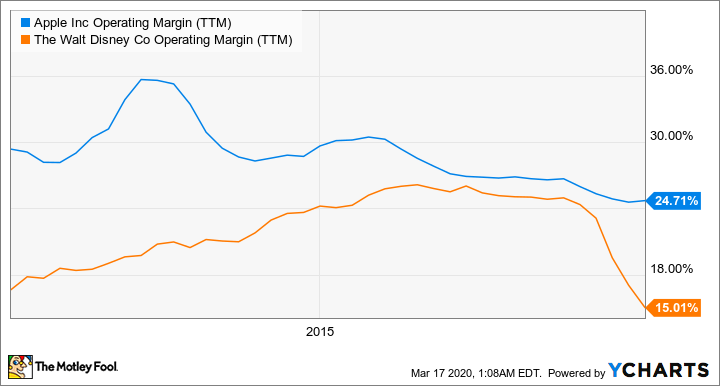 Therefore, acquiring Disney would significantly erode Apple's long-term margins. Disney is currently racking up losses with its streaming services (Disney+, ESPN+, and Hulu) to lock in viewers, and its integration of Fox's media assets and renovations at its theme parks are exacerbating that pressure.

Disney needs to grow its theme park and movie businesses to offset those costs, but both businesses are besieged by the coronavirus crisis. Apple, which lacks experience in both markets, could bite off more than it can chew by inheriting those businesses.

The risks outweigh the benefits

However, Apple would also be taking on Disney's rising content costs. Disney spent $1 billion on streaming content in 2019, and expects that number to rise to $2.5 billion by 2024. Apple would also need to balance the budgets of Disney's massive movie and media ecosystems, as well as the expansion costs of its theme parks and resorts.

All those moving parts would complicate Apple's core business, which mainly focuses on selling hardware and locking users into various subscriptions. Taking over Disney's businesses, along with its higher debt and operating expenses, would throttle Apple's free cash flow and its ability to raise dividends or buy back shares.

It's doubtful this "dream deal" would happen

It would be interesting to see Apple merge with Disney, but I doubt it will ever happen. The costs are too high, and the integration would be messy and complicated, especially since Disney is still in the process of integrating Fox's media assets.

Apple usually buys smaller companies, and it would be odd for the tech giant to abruptly gobble up one of the largest media companies in the world. It would make more sense for Apple to simply secure a partnership with Disney -- similar to the one Disney previously forged with Netflix -- to expand its streaming library instead.