Ford's biggest sites on the Continent are shutting down.

Ford Motor Company (F 3.89%) said that it will temporarily suspend production at its main manufacturing sites in Europe in response to the growing outbreak of COVID-19.

Ford will suspend production at its vehicle assembly plants in Cologne and Saarlouis in Germany, and at its engine factory in Craiova, Romania, starting on Thursday, March 19. Only essential work, such as maintenance and security, will continue at the sites, the automaker said. 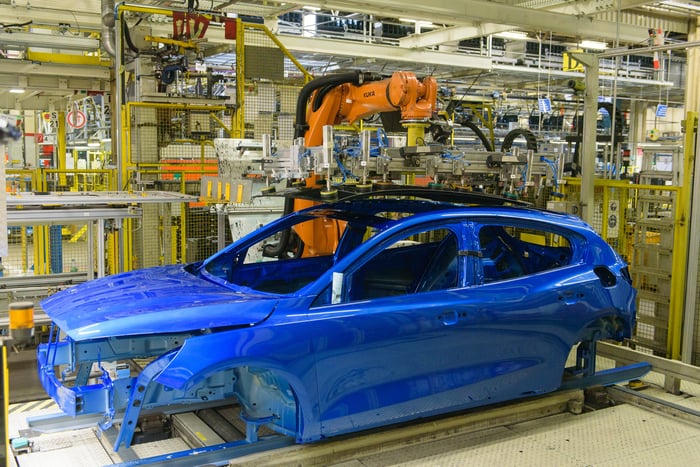 A Ford Focus on the production line at Ford's assembly plant in Saarlouis, Germany. The Saarlouis factory is one of four Ford plants in Europe that will be shut down by the end of this week. Image source: Ford Motor Company.

The Cologne and Saarlouis plants manufacture the Fiesta and Focus sedans, respectively, for European markets. While the two models have been discontinued in the United States, they remain among Ford's best-selling products in Europe.

The decision to shut down was driven in part by supply chain concerns, Ford Europe chief Stuart Rowley said. But he emphasized that the company is also considering the human aspect.

"While the impact of coronavirus at our facilities so far has been limited thankfully, its effects on our employees, dealers, suppliers and customers, as well as European society as a whole, is unprecedented," Rowley said.

Ford shut down another assembly plant, in Valencia, Spain, on Monday after three of its workers tested positive for COVID-19 over the weekend. The Valencia factory builds several models, including the European version of the Escape SUV, called the Kuga.

Ford last week ordered all of its workers outside of China to work from home for the duration if their jobs allowed.

The company said that it decided to move ahead with closing its European plants following the Worth Health Organization's designation of Europe as the new epicenter of the coronavirus pandemic.