Please ensure Javascript is enabled for purposes of website accessibility
Log In Help Join The Motley Fool
Free Article Join Over 1 Million Premium Members And Get More In-Depth Stock Guidance and Research
By Rich Duprey - Mar 17, 2020 at 8:07AM

Hydroalcoholic gel is in short supply globally, leading to cases of hoarding and price gouging.

LVMH, which also owns Sephora and Guerlain, says it will distribute the product to health authorities and hospitals free of charge. In a statement announcing the retooling, the conglomerate said, "LVMH will continue to honour this commitment for as long as necessary, in connection with the French health authorities." 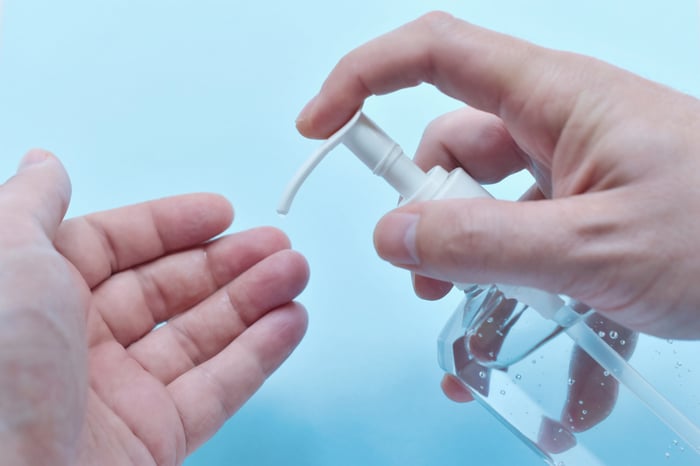 France has ordered all restaurants, retailers, and non-essential stores to close in a bid to halt the progression of the COVID-19 virus, but supermarkets, pharmacies, and other similar outlets remain open.

A spokeswoman for the Paris hospital system said supplies of hydroalcoholic gel, otherwise known as hand sanitizer, are "strained," though hospitals have not yet run out of it.

"Through this initiative, LVMH intends to help address the risk of a lack of product in France and enable a greater number of people to continue to take the right action to protect themselves from the spread of the virus," the luxury goods conglomerate said.

In the U.S., hand sanitizer is also in short supply. One Amazon.com (AMZN 1.37%) third-party seller has been suspended after hoarding almost 18,000 bottles of hand sanitizer in a bid to sell them at greatly marked up prices. After the Tennessee attorney general's office launched an investigation into him for price gouging, he donated the supplies to a local church.

Amazon removed the seller's listing and warned other third-party sellers their accounts will be suspended if they engage in similar conduct. It has removed over 1 million items for false claims and high prices.