New subscriber data supports the theory that the streaming giant will thrive as the pandemic continues.

Netflix (NFLX 5.03%) stock has held up particularly well lately, even as the broader market plummeted in the face of a bear market brought on by the outbreak of illness caused by the SARS-CoV-2 coronavirus. The prevailing wisdom is that as consumers are forced to hunker down at home, many will turn to streaming as their primary source of entertainment.

That theory got support today from data that showed that Netflix is experiencing higher app downloads in areas hardest hit by the coronavirus outbreak. Credit Suisse analyst Douglas Mitchelson analyzed app data and found spikes in both Hong Kong and South Korea, two of the streaming markets outside China most affected by the global pandemic. 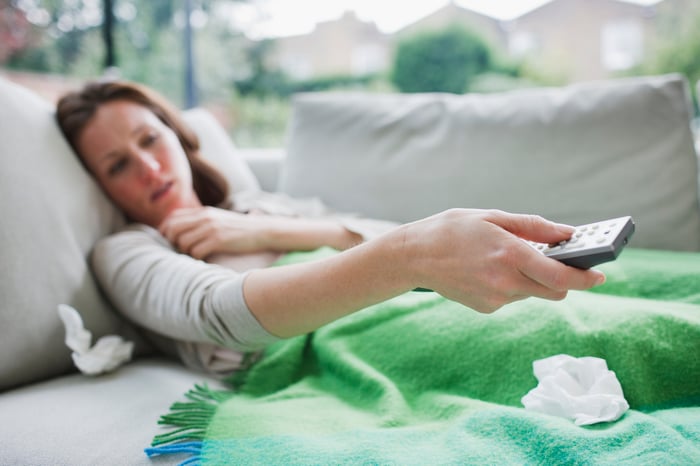 "The data in both Hong Kong and Korea present a strong case Netflix is seeing increased demand, as first-time app downloads inflected positively starting in January and continued into March," Mitchelson said. He went on to point out that the data reveals adoption by new customers, not viewing habits of existing ones, though the two may well be connected. The data shows that downloads in Hong Kong have doubled since Jan. 1, while in South Korea they have risen by 33%.

The data tracked a similar pattern for the tech giant in Italy and France. Much of Italy has been on total lockdown since late last week, as the government extended earlier restrictions on travel and business. The spike in app downloads began in mid-February, and downloads are currently up 100% in Italy and 50% in Spain, compared to early February.

This supports the conclusion that Netflix is benefiting from "large-scale social distancing measures resulting in people being stuck at home with limited entertainment options," Mitchelson said.