Please ensure Javascript is enabled for purposes of website accessibility
Log In Help Join The Motley Fool
Free Article Join Over 1 Million Premium Members And Get More In-Depth Stock Guidance and Research
By John Rosevear - Updated Mar 17, 2020 at 10:00AM

CEO: Production will be halted for at least two weeks.

Volkswagen AG (VWAGY 0.68%) will shut down its factories across Europe due to the spread of the novel coronavirus.

In a press conference on Tuesday, CEO Herbert Diess said that deteriorating sales, uncertainties around parts supplies, and concerns about limiting the spread of the virus led to the decision to suspend production at VW Group factories throughout Europe.

Production has or will be halted at VW plants in Spain, Portugal, and Slovakia, as well as at the Lamborghini and Ducati factories in Italy, by the end of this week, Diess said.

VW subsidiary Lamborghini said on Friday that it will suspend production until at least March 25 at its factory in Sant'Agata Bolognese, near the city of Bologna in northern Italy. Italy's industrial north has been one of the areas hardest hit by the outbreak of COVID-19, the illness caused by the novel coronavirus. 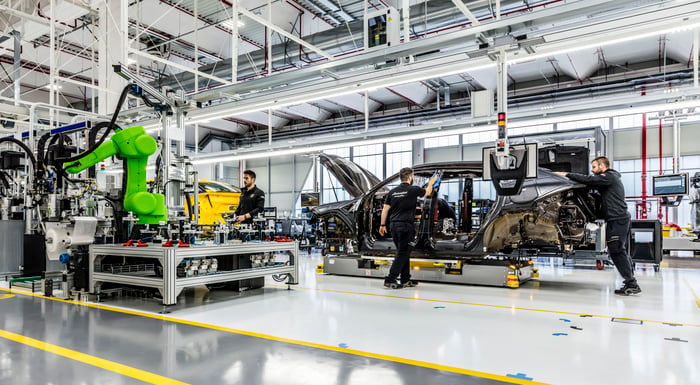 VW subsidiary Lamborghini shut down its Italian factory on Friday. VW's other European plants are preparing to shut down now. Image source: Lamborghini.

Diess said that most of VW's other European factories, including its plants in Germany, will now begin preparations to suspend production, likely for at least two weeks.

Under German corporate law, labor-union representatives have significant influence on senior-management decisions via a "works council," a committee that includes union leaders and senior company executives.

VW's works council recommended suspending production after concluding that it's not possible for the company's factory workers to maintain a safe distance from one another, so as to eliminate the risk of spreading the virus, Reuters reported.

Diess and CFO Frank Ritter said that because of the uncertainty around the consequences of the pandemic, it's not possible to forecast VW's financial performance for 2020 at this time.