The new schedule could clash with another major race, the Breeders’ Cup Classic.

For the first time since the last year of World War II, 1945, the renowned Kentucky Derby will be held on a date other than the first Saturday in May, according to an announcement by Churchill Downs (CHDN -0.07%). The racing and wagering company stated the Kentucky Derby will take place at the start of Labor Day weekend, Sept. 5, this year as a response to the COVID-19 coronavirus pandemic. 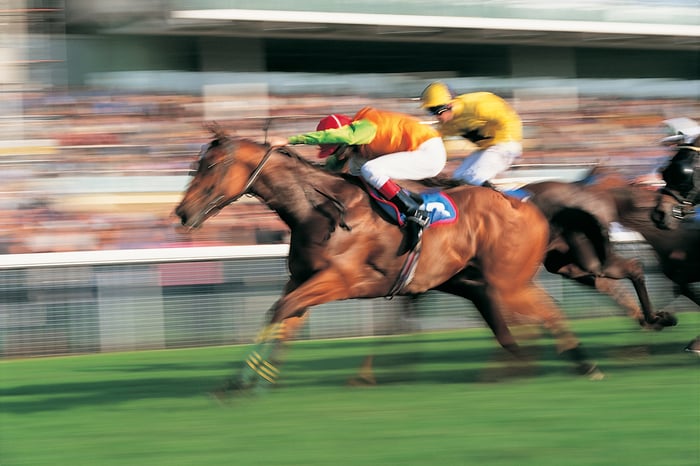 Churchill Downs CEO Bill Carstanjen reported that the company and NBC Sports, which broadcasts the event, discussed the best date before settling on Sept. 5. Since the 146th Kentucky Derby is just the first of three successive races, known as the Triple Crown, the other two races will also be rescheduled. Churchill Downs hasn't picked specific dates yet, but the 145th Preakness Stakes will probably run later in September, while the 151st Belmont Stakes will likely be rescheduled to October.

The Kentucky Derby is a fixture of the American racing scene, running every year without fail since its launch in 1875. Carstanjen noted that in 2020 "at no point did we ever consider canceling the Kentucky Derby." Audience presence is deemed important enough to not simply run the race spectator-free.

The new scheduling may present horse owners with a dilemma, since entering the Triple Crown could prevent them from running their animals in the Breeders' Cup Classic, an October or November race with a $7 million top prize. The typical May scheduling of the Triple Crown usually gives owners the entire summer to rest and condition their horses following the stress of competing in the Derby, Preakness, and Belmont races.

Churchill Downs Is Reopening Most of Its Casinos

Why Churchill Downs Stock Rocketed 32% Higher in May