Unless the country can slow the pace of COVID-19's spread, the number of people with cases severe enough that they require ventilators to breathe could totally outstrip our supply of the machines.

It's hard to know just how many ventilators U.S. hospitals will require to deal with the COVID-19 pandemic because the demand will largely depend on how rapidly the disease spreads, and how high the  number of people suffering from severe cases at the same time rises before it peaks and declines.

The American Hospital Association estimates that over the course of the pandemic's run through the U.S., 1.9 million COVID-19 patients will be admitted to intensive care units, and 960,000 of them will need mechanical ventilators to help them breathe. But a 2009 survey by the group estimated that U.S. hospitals only had 62,000 full-featured mechanical ventilators. There are another 98,700 or so older models available that could be put into use in an emergency.

Even if one ignores all the other medical conditions a person could have that might require them to be put on a ventilator, it's obvious that if a large fraction of those 960,000 patients are hospitalized during the same time frame, there won't be nearly enough ventilators to go around based on current supply. On the other hand, if social distancing works and the infection curve is flattened, those cases would be spread out over a longer time, keeping peak ventilator demand lower, in which case fewer would be required to support the seriously ill population. 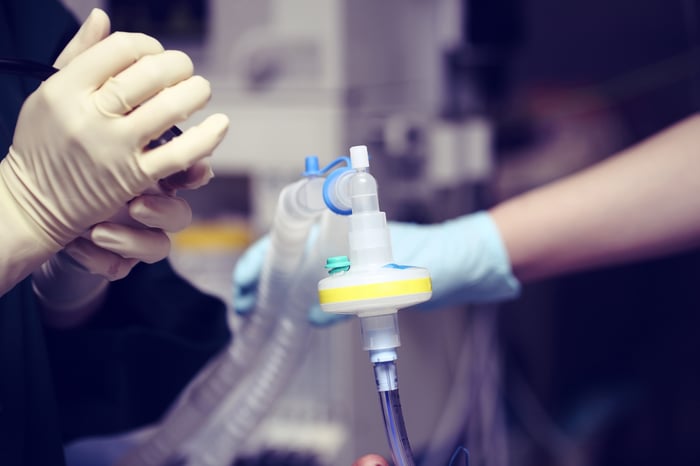 Of course, those ventilators will have to be at the right place at the right time as infection hot spots appear in different parts of the country. The federal government's strategic national stockpile has about 8,900 ventilators it can deploy. During a call with a group of governors earlier this week, President Donald Trump told them that the federal government was backing them, but they should "try getting it [the medical equipment] yourselves."

The Pentagon has also offered up to 2,000 ventilators, although the machines are different from those typically used in hospitals, so medical staff will require additional training to use them.

Medtronic (MDT 1.82%), General Electric's (GE -0.20%) healthcare division, and Allied Healthcare Products (AHPI), which all manufacture ventilation systems, stand to benefit from a potential increase in demand ventilators. And privately held Ventec Life Systems told Forbes this week that it could conceivably increase its ventilator production five-fold in 90 to 120 days.