Please ensure Javascript is enabled for purposes of website accessibility
Log In Help Join The Motley Fool
Free Article Join Over 1 Million Premium Members And Get More In-Depth Stock Guidance and Research
By Dan Caplinger - Mar 18, 2020 at 11:35AM

The stock market returned to its downward trend Wednesday morning, as market participants waited impatiently to see whether lawmakers in Washington would be able to put together an economic stimulus package that would both address key problems in the economy and give hard-hit Americans the financial support they need to get through the COVID-19 pandemic. Several stocks in the Dow Jones Industrial Average (^DJI 1.98%) faced downgrades from Wall Street analysts, as investors start to look at the second-order effects of some of the disruptions that the coronavirus outbreak has had. As of 11 a.m. EDT, the Dow was down 1,219 points to 20,018. The S&P 500 (^GSPC 1.86%) fell 128 points to 2,400, and the Nasdaq Composite (^IXIC 0.00%) lost 288 points to 7,046.

Tesla (TSLA 1.66%) has been fighting hard against the consequences of the pandemic on its business, but the electric automaker got bad news from local government officials that sent its stock below the $400-per-share mark. Meanwhile, Lennar (LEN -0.39%) was one of many homebuilder stocks that fell sharply Wednesday morning in the wake of negative comments from those following the industry.

Will Tesla temporarily shut down in California?

Shares of Tesla fell 9% Wednesday morning, bringing its losses from its February highs to more than 55%. In an about-face, it appears that the electric car specialist could have to shutter its California facilities temporarily in order to comply with health regulations. 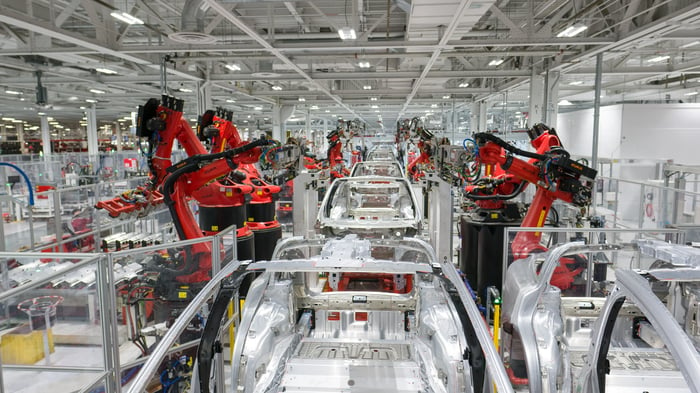 Tesla said Tuesday that local officials had granted its Fremont-based manufacturing facility the status of an "essential business." Tesla executives had apparently highlighted to employees the critical nature of vehicle manufacturing and energy infrastructure, explaining why the company believed that shelter-in-place orders in San Francisco and other surrounding communities shouldn't prevent people from reporting for work.

Yet on Wednesday, the Alameda County sheriff rebutted that assertion, saying that Tesla is not an essential business. As a result, Tesla is allowed to maintain only minimum basic operations under Alameda County's health order.

With about 10,000 employees working in Fremont, Tesla could see a major blow to its efforts to meet delivery targets for the first quarter of 2020. That didn't stop analysts at BofA Merrill Lynch from upgrading the stock from underperform to neutral based on the stock's recent plunge, but it still shows the challenges that Tesla will have to overcome at this most difficult time.

Elsewhere, shares of Lennar were down 11% Wednesday morning, and other major homebuilders saw similarly large downward moves in their stocks. Many players in the industry got downgrades from analysts at JPMorgan, as investors start to fear that COVID-19-related disruptions will dramatically affect home construction for an extended period.

Analysts downgraded Lennar's stock from neutral to underweight. JPMorgan sees Lennar and its peers facing a strong likelihood of an economic recession in the U.S., and that could take a heavy toll on home purchase activity at a key point. The spring season is historically the busiest for homebuilders seeking to sell their newly built projects, so the timing of the pandemic has been especially poor.

In the longer run, Lennar and other homebuilders face more challenges. With many construction workers unavailable to work, building activity is likely to slow to a standstill until the coronavirus outbreak runs its course. That could prove problematic for homebuilders, especially those that have significant debt and rely on transaction flow to finance their operations.

Investors are still coming to grips with all the impacts the COVID-19 outbreak will have on the business world. Tesla and Lennar are just a couple of the thousands of businesses that will face a big test in the months to come.