The company has proved a rare bright spot for investors as the coronavirus epidemic has worsened.

In the sea of red that represents the 29% year-to-date plunge of the S&P 500 index as of this writing, packaged foods manufacturer General Mills (GIS 1.42%) has enjoyed coveted status: Shares have gained nearly 6% during the same period.

As a defensive, consumer-oriented stock that stands to benefit from a shift to at-home food consumption during the COVID-19 pandemic, General Mills' current appeal isn't hard to grasp. Earlier this month, I recommended it as a safe dividend stock to consider buying during the coronavirus outbreak.

In the company's fiscal third-quarter 2020 earnings report released Wednesday, management bumped up its full-year earnings guidance slightly. With so many companies in various industries suddenly worrying about their basic solvency, one would think investors would interpret this outlook boost as an extremely positive sign. Yet shares fell roughly 5% in mid-afternoon trade (though this percentage decline was roughly half of a nearly 10% drop in the overall market during the session).

Below, we'll briefly review the quarter's results and full-year outlook and discuss why General Mills stock failed to react to a promising report. Note that all comparative numbers below refer to the prior-year quarter.

General Mills: A bird's-eye view of the numbers 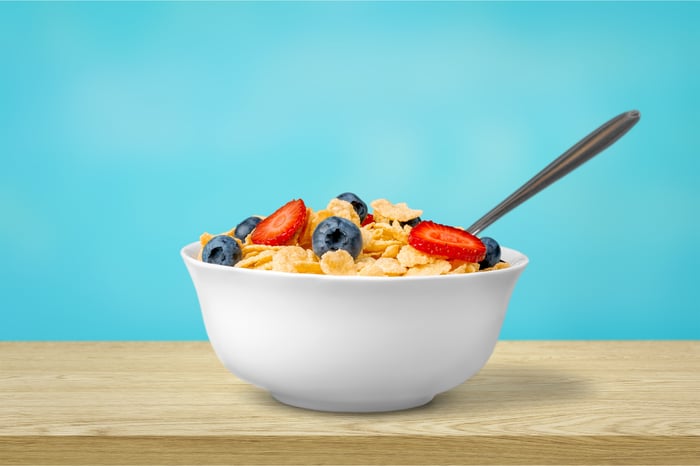 General Mills left its full-year revenue outlook intact on Wednesday. The company still expects to generate an organic sales increase of between 1% and 2%. But it anticipates achieving 6% to 8% growth in adjusted diluted EPS, versus a prior expectation of 3% to 5% expansion. Management indicated that the revised profit expectation derives from success in its ongoing "Holistic Margin Management" productivity savings program, along with a slight decline in input costs and a continuation of cost discipline.

General Mill's statement on its outlook provides clarity on the lack of a top-line outlook adjustment and is worth reading in its entirety:

The impact of the recent COVID-19 virus outbreak on the company's full-year fiscal 2020 results is still uncertain. The company's current outlook incorporates increased orders from retail customers in North America and Europe subsequent to the end of the third quarter in response to increased consumer demand for food at home, as well as headwinds in Haagen-Dazs shops and other foodservice channels resulting from lower consumer traffic. The most significant element of uncertainty in the company's full-year outlook is the intensity and duration of increased demand for food at home across all its major markets. Additionally, the company's outlook assumes its supply chain continues to operate with minimal disruption for the remainder of fiscal 2020.

There's a bit of nuance to this statement. The consumer staples multinational will clearly benefit from an increased allocation of household budgets to groceries as more consumers stay homebound during the pandemic. But supply chains that transport General Mills' (and competitors') products to regional distribution centers, and the supply chains that then move products to retail grocery shelves, are under great strain at the moment.

Thus, General Mills may not be able to immediately realize a boost from increased consumer demand for its household refrigerator, pantry, and pet-friendly product lines. And management is cautious to note that a relatively quick end to the pandemic could sap these demand drivers.

Nonetheless, General Mills stock has proven to be one of the safer tickers to invest in during an unprecedented time in the market. And in the case of a prolonged recovery from the current state of affairs, the company may well issue a more vigorous outlook for fiscal 2021 next quarter. Today's earnings report may not have lifted the "GIS" symbol, but it did reinforce the rationale behind the stock's 35 percentage point outperformance against the S&P 500 since the first of January.