Please ensure Javascript is enabled for purposes of website accessibility
Log In Help Join The Motley Fool
Free Article Join Over 1 Million Premium Members And Get More In-Depth Stock Guidance and Research
By Evan Niu, CFA - Mar 19, 2020 at 11:00AM

The Mac maker continues its push to replace laptops with iPads.

Over 10 years after unveiling the original iPad, Apple (AAPL -1.80%) has just made the biggest change to its category-defining tablet in the product's history: trackpad support for a cursor. In line with rumors, Apple is now offering a new keyboard accessory for the iPad Pro that includes an integrated trackpad, representing one of the Mac maker's most aggressive attempts to position the tablet as a true laptop replacement. 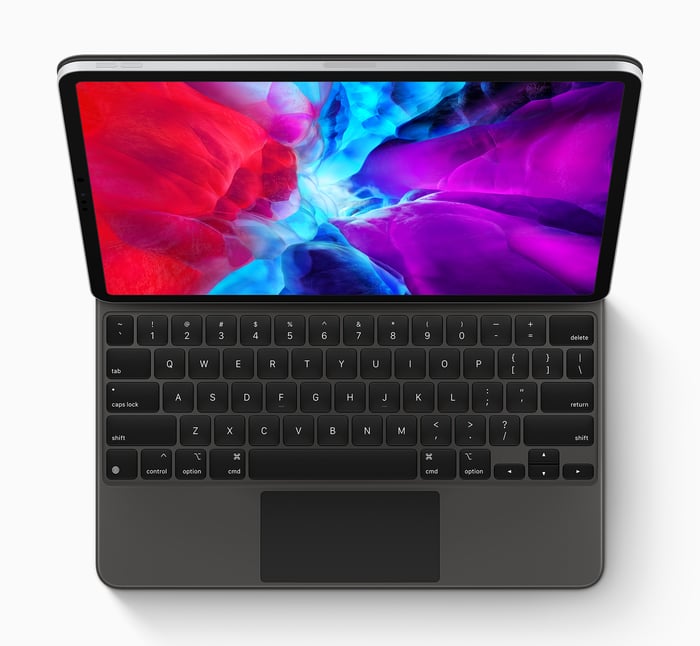 Apple really wants you to replace your laptop with an iPad

With major public events and gatherings being canceled due to the coronavirus pandemic, Apple quietly refreshed the iPad Pro, MacBook Air, and Mac Mini yesterday. The new iPad Pro, which comes in the same 11-inch and 12.9-inch sizes, is powered by a new A12Z Bionic processor. There is a revamped camera system that incorporates two cameras and a LIDAR sensor -- the latter which is typically found on self-driving cars that are in development (including Apple's own).

That sensor will work in conjunction with the cameras and other motion sensors to enable a new level of 3D-sensing capabilities, while the A12Z Bionic will handle the computer vision algorithms. The end result will be major advances in augmented reality (AR) technology.

Bringing a cursor to iPadOS is a massive pivot, eschewing the long-standing touch-only interface. Instead of a traditional mouse pointer, the cursor is displayed as a circle that changes based on context. iPads have supported pointer devices for accessibility, but adding broad support for mainstream consumers and a first-party accessory is a massive change.

Will Apple ever make a touchscreen Mac?

Marketing chief Phil Schiller has long derided touchscreen laptops due to ergonomic concerns, but Apple has been slowly backing away from those criticisms ever since it embraced keyboards for iPads, as that setup presents the same challenges. The trackpad will mitigate the ergonomic issues, reducing how often people have to reach up to interact with the screen.

The move also raises an important question that Apple has tried to deflect for years: Will the company ever make a touchscreen Mac? Such a product seems like a distinct possibility now, years after CEO Tim Cook compared hybrid devices to toaster-refrigerators and said the category was fundamentally compromised.

The MacBook Air's update was more incremental, with the most notable change being a Magic Keyboard that ditches the problematic butterfly keyboards that Apple has stubbornly been shipping over the past five years. Following the 16-inch MacBook Pro introduced last year with the same keyboard, it's been clear that Apple would transition back to traditional scissor mechanisms.

Other than that, the entry-level model now has more storage, as well as a faster processor, and received a price cut down to $999. The Mac Mini is merely getting twice the storage as before at the same price points.

Apple has already warned investors that sales will take a hit due to the ongoing public health crisis, but refreshing these products will help support demand at least a little bit.