Please ensure Javascript is enabled for purposes of website accessibility
Log In Help Join The Motley Fool
Free Article Join Over 1 Million Premium Members And Get More In-Depth Stock Guidance and Research
By Rhian Hunt - Mar 19, 2020 at 7:16AM

One of the company’s big advantages in the U.S. doesn’t matter much in China.

With fear of the coronavirus heating up demand for plant-based meats in China, Beyond Meat (BYND 7.18%) is among the U.S.-based companies looking to seize profits with both hands from this massive market. CEO Ethan Brown describes this as a "time of hyper-growth" for his enterprise, and he plans for aggressive expansion in Asia this year, including launching Beyond Meat's first production plant in China. However, the company faces stiff competition from other major food corporations who also want a slice of the meat-free pie.

Is there a market for plant-based meat in China?

Chinese consumers are among the world's foremost meat-eaters in the early 21st century, devouring 140 pounds of meat per capita in 2018. While per capita consumption is lower than the United States, the size of the country's population boosts the total to the point where Chinese citizens consume twice as much meat as Americans overall, or 28% of the world's yearly meat consumption.

The vast majority of it was pork until the recent advent of "pig Ebola" prompted the Chinese to cull approximately 50% of their herd, or 25% of all domestic pigs on Earth. Chinese consumers clearly enjoy eating meat, raising the question of plant-based meat's viability in the market.

In fact, the prospects for meat substitutes appears fairly sunny in China. Long before the arrival of novel coronavirus COVID-19, the Chinese meat substitute market was nearly 50% larger than the American market, reaching $910 million in 2018 compared to the United States' $684 million in the same year. China's plant-based meat sales grew 14.2% in 2018, following similar low double-digit growth in the prior three years, according to The Good Food Institute. 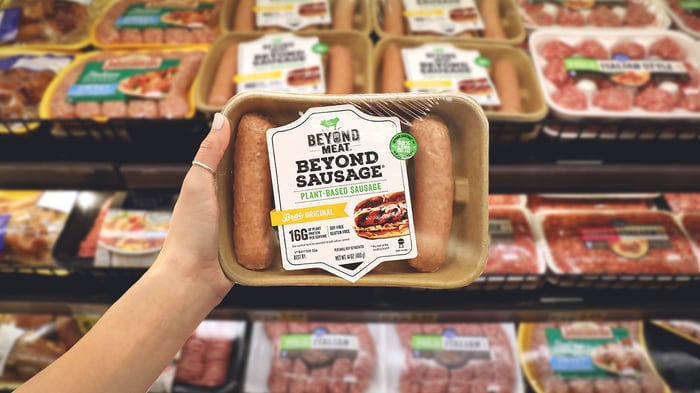 Comparing his company to Amazon in its early days, Ethan Brown said Beyond Meat would start producing its signature pea protein "plant-based meat" in the Netherlands for the European market by the end of March, and in China before the year is up. Beyond Meat's products are already on supermarket shelves in Hong Kong, Singapore, and Taiwan, so expansion into China is the logical next step.

The launch is a tall order since Beyond Meat currently has essentially no presence in China at all. It needs to not only build a production facility but ensure it is supplied with raw materials like high-quality pea protein and create a distribution network from the ground up to bring the finished products to Chinese consumers. While Brown may have spoken confidently of the possibilities to Jim Cramer in his interview on CNBC's Mad Money, a lot of heavy lifting still needs to be done.

The Chinese market is not quite "hyper"

While Beyond Meat seemingly has room to grow in China, Brown's claim that this market could itself drive "hyper-growth" might be overly optimistic. Other companies with even deeper pockets, such as privately-owned Cargill (and its more than $100 billion of annual revenue), have also started eyeing the plant-based meat opportunity in China hungrily.

Beyond Meat may have a compelling edge in the U.S. market where the reputation of soy is low due to concerns about rainforest clearcutting, GMOs, and rumored effects on testosterone, according to research by Lumina Intelligence. In its home market, Beyond Meat's use of pea protein might raise its appeal above rivals such as Impossible Foods which still creates "soy meat." But no such taboo against soy exists in China. Besides massive internal production, China buys up around 60% of the soybeans made available annually on the international market.

As a result, Beyond Meat will likely have to compete on the basis of price alone. Cargill is already very active in the region with 29% of its 2019 revenue coming from the Asia-Pacific market. Cargill can leverage its large and well-developed regional supply and delivery networks to launch a powerful tug-of-war for market share against Beyond Meat and other competitors.

Beyond Meat may well have the potential for continued strong growth, but investors considering food stocks should be hesitant to look at the company's launch in China this year as the single most important driver of its future success.