Other suppliers are also picking up the pace to prevent shortages.

As the coronavirus prompts many restaurant chains to shut down the dine-in portion of their businesses, and people cut back sharply on eating in public spaces to avoid potential infection, Tyson Foods (TSN -0.12%) has shifted meat production toward meeting grocery store demand. Food companies use different cuts, packaging, and processing to prepare meats for restaurant kitchens, which operate on a commercial scale, and supermarket meats destined for home cooking.

With many staples selling out at grocery stores across the U.S., Tyson decided to shift its operations toward supplying the sector currently seeing the highest demand. In a company statement published on the Tyson blog, company president Dean Banks pointed out that there is no meat shortage in America at the current time, and the challenge simply lies in moving meat products to the places they're needed most. 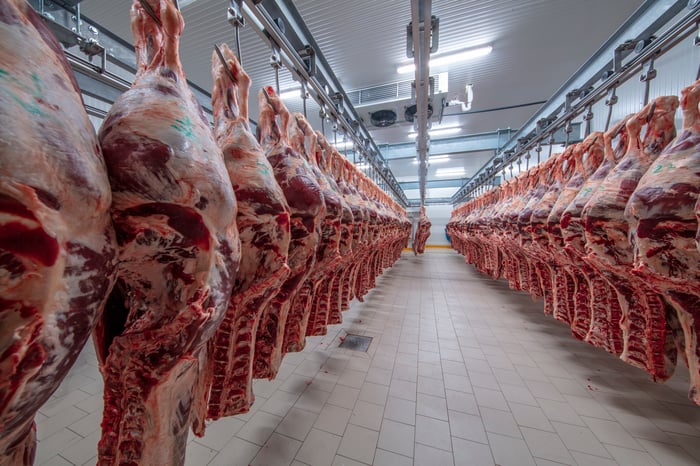 Tyson has changed over a portion of its production of all three kinds of meat it processes -- chicken, pork, and beef -- to the retail sector. The company cites the flexibility of its operating model as key to making the changeover quickly and efficiently, getting packaged meat onto grocery store shelves as fast as possible despite the magnitude of the task. Its focus on up-to-date digital coordination for its meat production appears to be paying off in the speed of this latest initiative.

Tyson isn't the only one working to get plenty of meat back in America's supermarkets. Its competitors Pilgrim's Pride (PPC -0.29%), Sanderson Farms (SAFM -0.10%), and the privately held Perdue Farms have also redirected part of their poultry production to the retail sector.