Capitalizing on the unusual situation, the e-commerce powerhouse has vastly widened its customer net.

It's difficult to believe right now, but there will come a time when the novel coronavirus nightmare is nothing but a fading memory. People will go back to their actual workplaces. Consumers will set foot in stores again. Things will return to normal.

The time between now and then, however, is either an opportunity or a curse. Some companies are crumbling under the pressure, while others are setting the stage for a business boom coming out of the COVID-19 pandemic. Amazon.com (AMZN -2.49%) is not only one of the latter, but perhaps the organization best positioned to see a permanent benefit from what it's doing right now to deal with the situation.

Perfectly positioned for the rebound

The proverbial dots aren't tough to connect. Consumers are (mostly) stuck at home, but they still need the goods necessary for everyday life. Some are also willing to splurge a little, treating themselves to a new toy, gadget, or gizmo to help pass the time. They're just doing most of that shopping online at this time. Amazon is so overwhelmed, in fact, that it's looking to hire on the order of 100,000 warehouse workers to keep up with demand.

The e-commerce giant's victory in these tough times goes beyond simply being an online bazaar, though. Three reasons stand out above the rest. 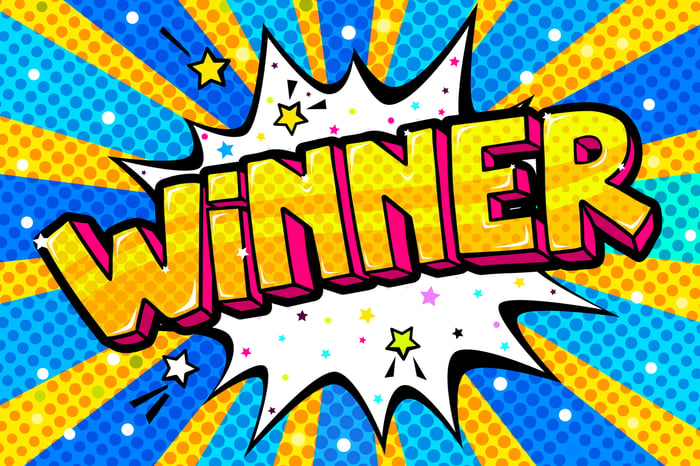 1. Amazon Prime to the rescue

Chief among those reasons is the prospect that the self-quarantining of Americans -- and the rest of the world  -- makes a streaming entertainment platform like Amazon Prime a valuable commodity.

The company hasn't said anything to that effect, for the record, but the anecdotal evidence to this end is considerable. Viewing-measurement outfit Nielsen believes television viewing could grow as much as 60% while people are homebound, based on other instances where viewers haven't been able to get out for prolonged periods. The company was able to sweeten the pot with a lucky spate of new additions to Prime's video library this month, including the debut of a serialized spin on Agatha Christie's The Pale Horse and last year's remake of Pet Sematary.

Amazon Prime members, of course, spend much more at Amazon.com than non-Prime members do.

2. Sell the medium to sell them media

Amazon also made sure bored consumers have some new technological toys to play with.

Getting a deal on the company's proprietary Fire tablets isn't too much of a challenge for patient shoppers, but the discounts on this line have been particularly compelling of late. On Tuesday, Amazon's Fire HD 8 tablets, for instance, were at their lowest prices ever. It may have been an effort to cash in on the surge of Apple (AAPL -1.80%) iPads that DigiTimes reported was seen in China late last month, right at the apex of the country's corporate, school, and factory shutdowns.

Some would argue the typical Fire tablet isn't the ideal substitute for a work or school computer, and they'd be right. Aside from Apple's iPad, a tablet from a name like Samsung powered by an authorized version of Android -- meaning all Google apps work on them as they should -- would be a better alternative.

Not everyone is necessarily looking for a work or school tool, though. A bunch of bored consumers are just looking for another low-cost media device that lets them browse the web, play games, or watch videos. The Fire tablet does all three and does so in a way that readily directs them back to Amazon's digital offerings.

In that video gaming vein, global mobile game downloads surged 39% in February, mostly thanks to general demand in China, according to App Annie. Apple's app store's game downloads jumped a whopping 62% last month, coinciding with the reported increase in demand for iPads. With the United States about a month behind China in the coronavirus spread and containment process, this month could be a huge one for domestic tablet sales and mobile game downloads. North America's wave, however, may be more equitably distributed and less about Apple.

Finally, Amazon won points with consumers this week when it decided to prioritize the sale of consumer staples at the expense of consumer discretionary goods.

It wasn't a decision the company intentionally publicized. Rather, on Tuesday, Amazon informed its third-party sellers it would temporarily stop receipts and storage of any goods other than necessities like personal care items and cleaning supplies. At least one of those sellers confirmed the move with Reuters, however, and it soon became public knowledge that Amazon was doing all it could to meet the most important consumer needs right now.

For anyone on the fence about becoming an Amazon customer, it just became much easier to do so.

Don't misread the message. Amazon can and will suffer as a result of the coronavirus pandemic, particularly if the virus (which causes the disease COVID-19) kick-starts a true U.S. recession. Amazon could also fail to satisfy any new customers it's acquired during this trying time, souring them on the company before those consumers have a chance to explore everything the company has to offer. More than a few onlookers fear its already-stressed delivery network will buckle under heightened demand stemming from the COVID-19 outbreak, which could also frustrate Prime loyalists. The company will have to proceed with caution.

This crisis has been an obscured opportunity for a lot of companies, though, with Amazon.com at the top of that list. So far it seems to be handling it very well.