While high-momentum stocks have completely dominated cheaper value stocks over the past decade since the 2008 global financial crisis, recent events have turned the tables in a big way. There's no better example than the success of recent stock picks by Berkshire Hathaway (BRK.A 1.75%) (BRK.B 2.02%). The Warren Buffett-led conglomerate has received some criticism for sitting out a lot of the tech-fueled 11-year bull market, when expensive stocks continued to march higher while cheaper stocks stagnated.

While many of Berkshire's existing holdings have indeed taken big hits recently, these are stakes that it has owned for years. Meanwhile, Berkshire's newest picks -- Kroger (KR 3.21%) and Biogen (BIIB -0.12%) -- have dramatically outperformed the market during these troubled times, proving that in times of turmoil, Berkshire's "risk-off" philosophy is the more resilient play. Kroger has a surge in demand and is hiring more associates

In February, Berkshire released its fourth-quarter stock picks, which included a $549.1 million stake in Kroger, America's largest pure-play grocer and second-largest grocer behind Walmart (WMT 2.85%). At the time, Kroger had been somewhat left behind in the raging bull market. Investors had feared new e-commerce competition from Walmart and others would disrupt legacy grocers like Kroger. In fact, that's one of the reasons Buffett himself was ambivalent about the Kroger buy, which we now know was made by one of his top lieutenants, Ted Weschler or Todd Combs.

These concerns caused Kroger's P/E ratio to fall into the low teens in the fourth quarter of 2019, when Berkshire made the purchase. However, as we now know, the timing of the Kroger purchase couldn't have been better, with the stock surging 17.6% in 2020 vs. a 25.4% decline for the S&P 500. 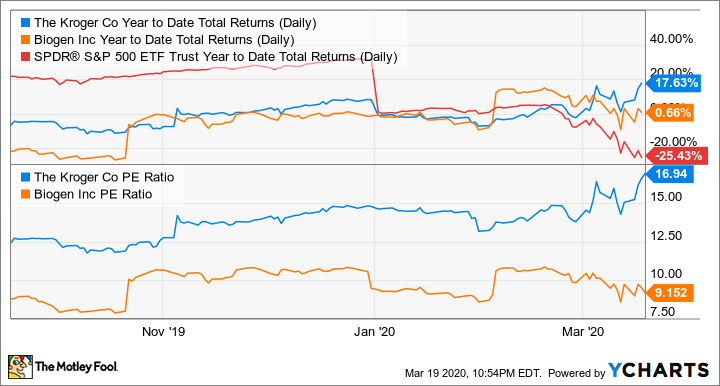 Obviously, with people quarantining at home, and with many having a Kroger-brand store as their nearest supermarket, people are stocking up on food, toiletries, and other household items, leading to a demand surge.

Recently, management said it had hired 2,000 more associates and had 10,000 open positions in order to deal with the surge in demand from COVID-19. The company also recently reported solid fourth-quarter results, beating analysts' expectations for adjusted earnings per share, with revenue meeting analysts' expectations. Same-store sales (excluding fuel) were up 2%, and the company's "Restock Kroger" plan executed about $1 billion of cost savings as the company adapted to more omnichannel and digital offerings. Kroger is also confident amid the downturn, recently declaring a $0.16 quarterly dividend, to be paid on June 1, 2020 to shareholders of record as of May 15, 2020.

As of now, Kroger is looking like a great recession-resistant, dividend-paying consumer staples stock to get investors through this time.

The same recession-resistant qualities appear in Biogen, Berkshire's other recent pick. As you can see above, Biogen is also an especially cheap stock, with a P/E ratio in the single digits. That is likely because investors had worried about incoming competition for its main neurological drugs, especially Tecfidera for multiple sclerosis, which accounts for 39% of the company's revenue.

However, Biogen just won a patent dispute against rival Mylan (MYL), which means that Tecfidera should retain patent exclusivity through 2028. In addition, there is potential upside for Biogen with its Alzheimer's drug Aducanumab. The original Aducanumab study had been canceled, but in October, Biogen reinstated its trials due to new data that indicated the drug reduced the decline in Alzheimer's patients at higher doses. The company is hoping to begin a new clinical study soon in 2020.

In addition, Biogen has around 25 other drug candidates in its pipeline, indicating potential options for future blockbusters.

What also makes Biogen a prudent pick is that it's somewhat recession-resistant. After all, people with multiple sclerosis aren't going to go without their medicine just because the economy is in a downturn. That, combined with several options for new blockbusters in the pipeline, presented Berkshire with a low-risk, high-potential-upside scenario that likely appealed to Berkshire's investment officers.

Though Biogen is a biotech stock and Kroger is a consumer staples stock, both were not only value stocks with low P/E ratios, but also not particularly cyclical, which is why they have held up much better than other Berkshire picks in the banking, airline, and energy sectors. That's why Berkshire's new investment managers are looking like intelligent investors these days, seeking out cheap, non-cyclical stocks in the later stages of this bull market -- before the bottom fell out of the S&P.