Please ensure Javascript is enabled for purposes of website accessibility
Log In Help Join The Motley Fool
Free Article Join Over 1 Million Premium Members And Get More In-Depth Stock Guidance and Research
By Daniel Foelber - Mar 20, 2020 at 10:35AM

Determining if Dow Inc. stock is a buy in today’s market.

Dow Inc. (DOW) is a massive industrial maker of coatings, paints, solvents, lubricants, packaging, and specialty polymers. Traditionally known as a stodgy and cyclical business, Dow's stock price has taken a turn for the worse, falling 60% in 2020. Now yielding 12%, is Dow a company income investors and retirees should put on their radar, or is the sell-off in the stock justified? 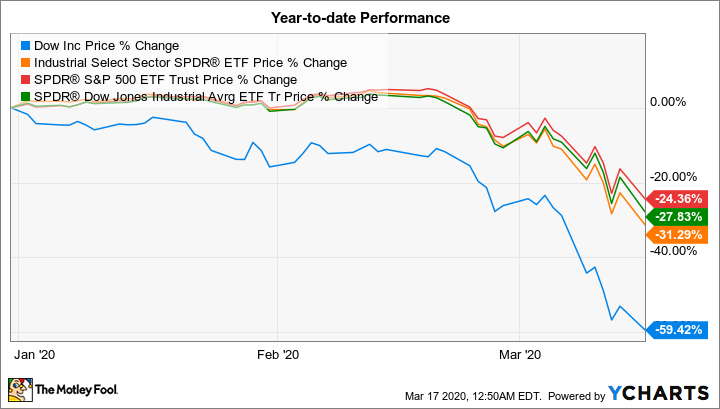 For about a month now, the effects of the novel coronavirus have rippled through global markets, halving the price of oil and sending much of the world into an economic slowdown and potential recession.

Compared to other industrials, Dow is not unique in its exposure to an event like this. When you have a global supply chain, you're going to get hit hard when there's a halt in global shipments, transportation, and manufacturing. As an integral member of the worldwide chemical industry, Dow's business is getting nothing short of hammered.

On the production side, Dow's supply chain consists of a slew of manufacturing inputs and materials that could prove difficult to purchase with transportation challenges. Then there's its workforce, which could be pressured to cut production from the workplace risks of coronavirus as well as a drop in demand from Dow's customers.

Dow acts as a supplier to several industries, most of which ebb and flow along with the economy. Each of its three segments has less than 50% of its sales from the United States. Essentially, Dow's suppliers, operations, and customers are global, capital intensive, commodity-driven, and are tied to the global economy. 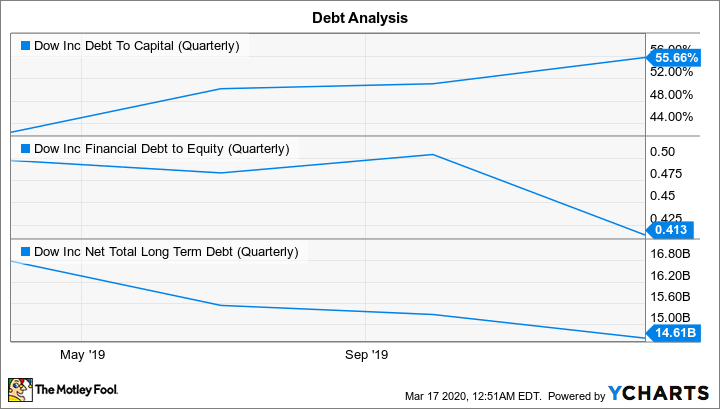 Even in good times, Dow uses a lot of debt to run its business. When times are good, this can be seen as "good debt" for the cash flow-rich Dow. When Dow spun off from DowDuPont in late March 2019, it was listed in the Dow Jones Industrial Average with the reputation as being a stable industrial with the highest dividend yield of the bunch, which, at the time, was around 5% to 6%. In a slowing economy that could see manufacturing and global sales stall, Dow's debt looks more and more dangerous.

Almost all of Dow's chemical products are tied to basic feedstocks, most notably crude oil. The cyclical nature of Dow and its tethering to feedstocks and global trade makes the company vulnerable to the volatile commodity prices and trade tensions that plagued Dow's earnings in the fourth quarter of 2019.

Dow management cited several reasons for this underperformance, including price and margin compression in the industrial sector. The fact that Dow's business was under pressure before the onset of the coronavirus is a red flag, considering Dow's susceptibility to a global pandemic. 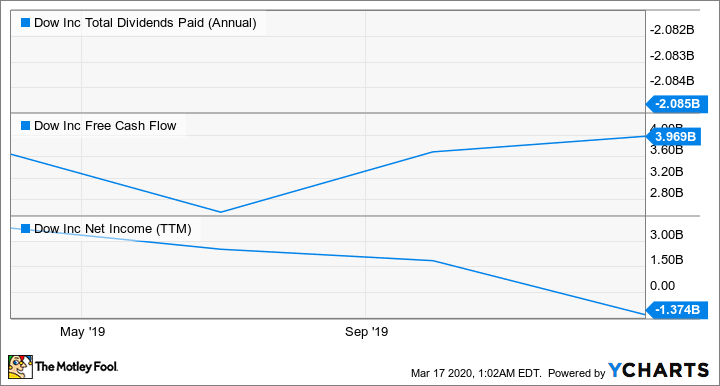 In the short term, Dow will likely have some seriously ugly quarters. The company's cash flow can't be expected to remain double its dividend as it was in 2019. Due to a few rough quarters and a struggling business, Dow's trailing twelve-month (ttm) net income is negative, a poor sign for a company facing a medley of headwinds.

Dow's rising debt-to-capital ratio over the past year presents a solvency concern, despite the company doing a good job decreasing total net long-term debt as a whole. Overall, Dow's business looks healthy, but its balance sheet isn't ready for the current coronavirus market.

Dow has improved its operations and positioned itself to return strong cash flow even when commodity prices are low. But the ripple effects of the coronavirus across the industrialized world have a great effect on Dow's business. I think Dow, as a business, is a great company, but anyone considering the stock now can't take the dividend for granted.

As much as Dow looks like it's in the doghouse, picking up a few shares for the long term isn't a bad idea at this reduced price. Lower commodity prices and an economic slowdown in trade and commerce exploits nearly all of Dow's weakness. I know it looks bad, but easing into Dow while keeping some dry powder in reserve is a reasonable choice, given the stock's bludgeoning so far in 2020.