Please ensure Javascript is enabled for purposes of website accessibility
Log In Help Join The Motley Fool
Free Article Join Over 1 Million Premium Members And Get More In-Depth Stock Guidance and Research
By Will Healy - Mar 20, 2020 at 8:51AM

Coronavirus is a surprisingly insignificant part of this decision.

COVID-19 seems to have ended Micron's (MU -1.62%) resurgence almost before it began. The Boise, Idaho-based memory chip manufacturer has seen its stock beaten down along with most other tech stocks as investors sell en masse.

The effects of coronavirus

Until recently, Micron had gone into a recovery mode. After an unexpected drop in demand in 2018, Micron stock had finally begun to recover. With the rise of 5G, many had forecasted an increase in demand for memory in general.

The report for its first quarter of 2020 spelled this out for investors last December. DRAM, which makes up 67% of the company's revenue, saw a 2% quarter-over-quarter rise in revenue despite a 41% drop from the same quarter in fiscal 2019. Likewise, NAND memory, which makes up 28% of revenue, saw revenue rise 18% from the previous quarter. This occurred despite a 14% year-over-year decline. 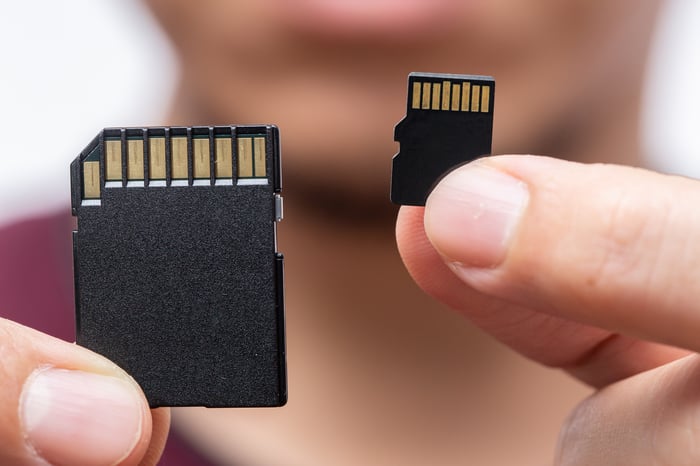 Micron derives 89% of its revenue from customers based outside of the U.S., and much of that comes from China. Hence, when the second-quarter earnings come out on March 25, they should reflect some of the damage caused by COVID-19 in China.

However, with coronavirus grinding activity to a halt across the rest of the world, Micron's business and its stock have hit a wall. As a result, a stock that traded above $60 per share as recently as mid-February has now fallen into the mid-$30s per share range.

Since the beginning of 2018, Micron stock has risen above the $60 per share level on three different occasions. Investors should not rule out the possibility of an eventual return to that level. At some point, the hysteria surrounding this virus will pass, and memory demand will likely rise once again.

If that happens, the question for investors is whether it can stay above $60 per share.

Micron stock presents a problem for investors. As memory prices go, so goes Micron stock. Memory prices spike to high levels when demand surges. These prices also tend to fall through the floor when market demand slows. This profoundly affects Micron revenues, and, by extension, Micron stock. Under these conditions, Micron stock has found it challenging to register long-term gains since the late 1990s.

To be sure, cycles remain a part of investing. The S&P 500 tends to move higher in good economic times, and pull back when the economy turns. However, the degree of the pullback is what differentiates the S&P from Micron stock. The coronavirus-driven selling has reduced the value of this index by just about 29% as of the time of this writing. However, it trades at levels more than 200% higher than the lows of 2009. Contrast that with Micron stock, which first reached its current price on a split-adjusted basis in 1995! 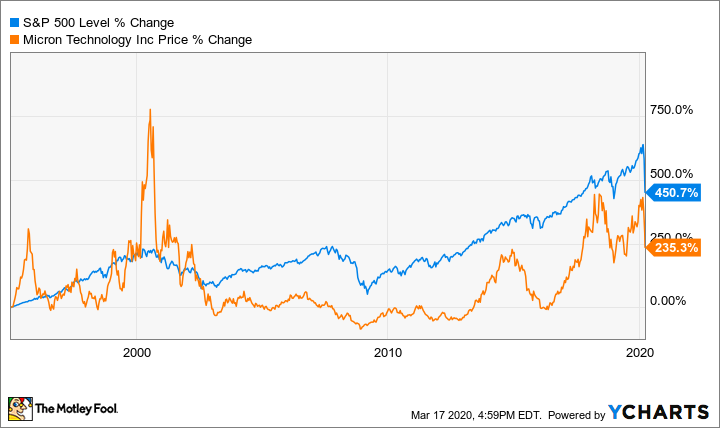 However, one trend has mitigated this cycle somewhat -- memory demand. In previous decades, PCs drove most of the memory demand. That changed somewhat with smartphones and tablets. Now, technologies such as artificial intelligence (AI), virtual reality (VR), the Internet of Things (IoT), and others demand exponentially more memory.

While the need for more memory does not eliminate the cycle, it has changed it. Downturns in PC memory demand sent Micron stock below $10 per share on more than one occasion; the last time this happened was in early 2016. Micron also traded in the $5 per share range as late as 2012. However, during the memory price decline in 2018, Micron fell to a low of only $28.39 per share.

Moreover, the aforementioned mid-$30s per share stock price in 1995 came in near the top of that cycle. Today, a similar price falls toward the lower end in the cycle. In this sense, things have changed for Micron stock.

Still, given the cyclical nature of this stock, this may be a ticker that works better for trading than investing.