Please ensure Javascript is enabled for purposes of website accessibility
Log In Help Join The Motley Fool
Free Article Join Over 1 Million Premium Members And Get More In-Depth Stock Guidance and Research
By Will Healy - Jan 16, 2020 at 9:08AM

Some investors may cringe when they hear the words, "it's different this time." Indeed, the history of Micron (MU 3.85%) stock has given investors reasons to be wary. Rather than rising over a long period, Micron has risen and fallen as the price of memory chips increases or decreases. During these boom times, investors pile into Micron stock, learning the hard way that things are not so different when losses mount.

However, a massive surge in demand for memory has changed Micron. Micron stock faces uncertainty, even amid an upcoming trade deal. With all of the misgivings, investors need to prepare for a change in the way the stock behaves without expecting memory cycles to disappear. 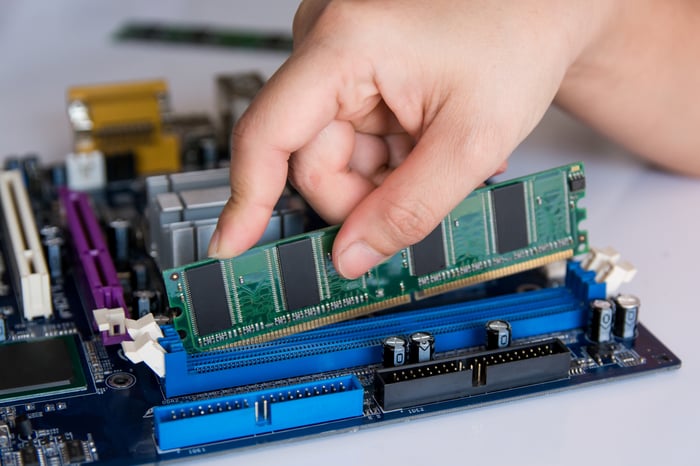 The historical cycle of Micron stock

Micron makes the RAM, or temporary memory needed to power computers and handheld devices. Until consumers widely adopted smartphones and tablets, PC demand served as the primary driver for the cost of memory. Since the mid-1990s, the price of Micron stock has spiked higher during times of high memory prices.

Micron and its peers had to make predictions of the demand for PCs to know how much RAM to produce. When memory manufacturers overproduced, chip prices plunged, and Micron would report losses and plunge back to single-digit levels. The laws of supply and demand are unforgiving.

In such an environment, Wall Street treated Micron as a proxy for memory prices, leaving investors little reason to buy for the long term. 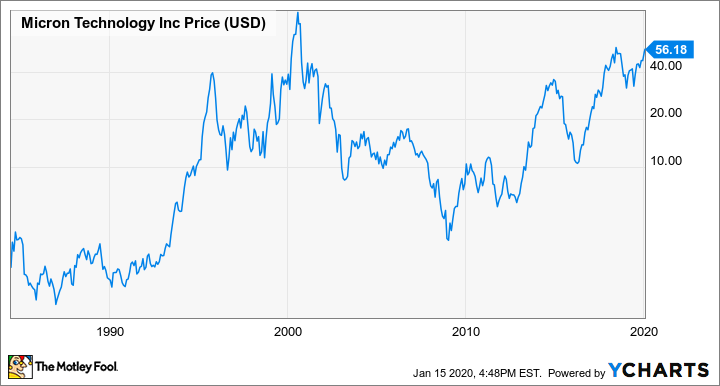 Micron and the effects of changing technologies

Today's technology brings with it different memory needs. Thanks to innovations such as artificial intelligence (AI), virtual reality (VR), and the Internet of Things (IoT), the tech market appears poised for a permanent demand increase, with a typical machine learning training workload requiring six times as much DRAM as a "standard cloud server." The rise of 5G also promises to increase the reach of these technologies. This is what makes things "different" this time, at least to an extent.

Although new technologies have increased overall demand for Micron's products, they haven't made demand, or Micron's stock price, any less cyclical. What it did do was alter its trading pattern. During past drops in memory prices, Micron usually fell below $10 per share. Following the crypto decline in 2018, Micron saw a low of just $28.39 per share in December 2018.

Since that time, optimism in the memory market has again increased. Micron rose with this demand. As a result, its current price, around $57 per share as of the time of this writing, is not far below its 5-year high of $64.66 per share achieved in May 2018. Investors should also note that the forward P/E ratio stands at only around 10.7. With the cyclical nature of Micron stock now a known quantity, investors have been trained to expect a downturn in demand and resulting sell-off. As a result, multiples remain low relative to the broader market.

Other factors that will influence Micron

Micron has always faced significant competition in the NAND memory market. However, until recently, Boise, Idaho-based memory chipmaker had two competitors in the DRAM market, SK Hynix and Samsung. Since the U.S.-China trade war began two years ago, Micron, like other tech stocks, struggled for much of 2018 and 2019. This obstacle appears to have disappeared as the U.S. and China meet to sign a phase one trade deal.

With this headwind gone, Micron and other tech stocks have surged in recent weeks. However, I urge caution. For one, a trade deal could lead Micron stock into a "sell the news" decline. Secondly, China-based memory chipmakers such as Yangtze Memory Technologies Co. in the NAND space and DRAM manufacturer ChangXin Memory Technologies have begun to emerge. Some analysts believe they will make up 5% of the world's market by the end of 2020. Add this to emerging players in Taiwan and Japan, and Micron faces an increasingly competitive market.

How to handle Micron stock

Emerging technologies have permanently changed the demand curve on memory pricing. Thanks to the rise of AI, IoT, 5G, and other technologies, memory will become more critical than ever to the tech industry.

However, investors should note that this has not changed the cyclical nature of the memory market or of Micron's stock: it has merely altered the cycle. This led to a less extreme drop in 2018. It also creates uncertainty for Micron as it approaches its five-year high.

Moreover, the trade deal may not bring the expected gains. For one, Micron has moved higher in recent weeks. Consequently, investors may sell the news. Moreover, competition has increased, especially within China. Hence, this will likely reduce demand for the company's memory chips as China sources memory domestically.

Micron stockholders can breathe a sigh of relief that its days of trading in the single-digits have likely ended. However, with Micron stock trading near five-year highs, this is not the time for investors to expect "different."