Last Friday, Sept. 27, Micron Technology (NASDAQ:MU) saw its stock take an 11% tumble after the company reported its fiscal fourth-quarter earnings. Even though Micron beat expectations for revenue and earnings per share, the market seemed to hope for better guidance, specifically regarding gross margins.

Unfortunately for shareholders, that same day, several media outlets reported the Trump Administration was considering blocking U.S. investments in Chinese companies. That sent shares of technology companies with China exposure, such as Micron, another leg down on top of the post-earnings reaction.

Shareholders shouldn't despair too much, however. The stock is still up about 35% on the year even after the dramatic sell-off, handily ahead of the broader market. 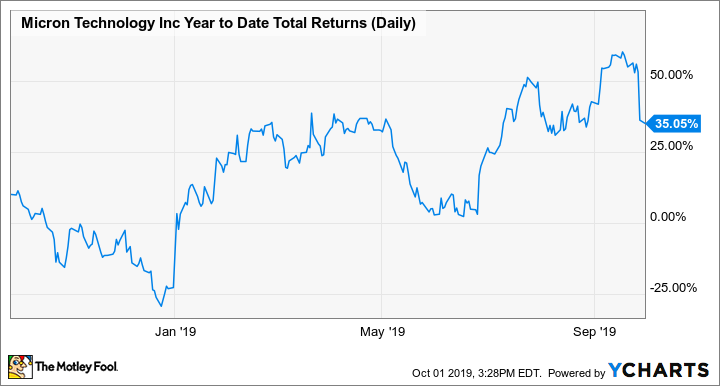 In fact, I took last Friday as an opportunity to pick up even more shares of the memory and storage giant. Here's why.

1. Executing to a "T" and catching up to competitors

While many Micron investors tend to focus on the overall supply-and-demand dynamics of the memory market, Micron is also making vast improvements at the company level. In the DRAM market, where it generates most of its revenue and profits, it used to be a cost laggard, behind lower-cost producers Samsung (OTC: SSNLF) and SK Hynix (OTC: HXSCL). This is important because DRAM is generally thought of as a commodity, so the lower-cost producer will tend to make more profit than rivals through the cycle. Last quarter, DRAM chips made up 63% of Micron's revenue and an even higher percentage of its profits. I bought the dip on Micron. Image source: Getty Images.

Under CEO Sanjay Mehrotra, Micron has made tremendous progress catching up to Samsung and SK Hynix over the past couple of years, to the point where it's now very close in its cost structure. Entering fiscal 2019, which just ended, Micron had half of its production on 20nm DRAM nodes and older; but by the end of the fiscal year in August, it had ramped up its leading-edge capabilities to the next 1X node and then 1Y nodes. By the end of the year, Micron had already turned out three-quarters of its DRAM production on these leading-edge nodes. The smaller the node, the greater the yield per wafer, and thus the lower cost per bit.

Not only that, but Micron also just began shipping 1Z DRAM chips -- the first in the industry to do so, surpassing Samsung and Hynix in the race to 1Z node production. This shows that Micron continues to catch up to its Korean rivals, and could even potentially surpass them in cost per bit in the near future. On the conference call with analysts, Mehrotra said that since the last downturn in 2016, Micron has already improved its overall EBITDA margins (earnings before interest, taxes, depreciation and amortization) by 2,500 basis points -- 25 percentage points -- versus the rest of the industry.

Clearly, Mehrotra has brought a discipline and focus on execution that is working, which should help keep Micron profitable through current and future downturns.

2. The cycle may be turning

In addition to Micron getting better at the company level, the overall memory industry seems to be recovering. It appears pricing for NAND flash chips has bottomed out, and that DRAM prices, while not quite having hit bottom, are getting very close. On the conference call with analysts, management said: "DRAM demand bounced back, as the factors that impacted calendar first-half demand largely dissipated. NAND elasticity is driving robust demand growth, causing industry inventories to improve rapidly."

NAND flash prices have crashed over the past year and half, as the industry's move to stacked 3D NAND production technology caused a huge increase in industry supply. In fact, margins in the NAND flash industry are currently at a 10-year low, according to Micron management.

But the extreme low prices have caused demand for NAND flash to accelerate. Meanwhile, the supply situation has been helped by industry capital-expenditure cuts and a supply disruption earlier this summer at NAND producer Toshiba Memory Corporation.

Micron's management expects NAND margins to increase from now through the end of the year, despite not getting much in the way of lower costs, as it implements a technology transition to replacement-gate technology (replacement gate should eventually lead to significant reductions in costs by 2021).

Since the fall in DRAM prices happened later than NAND, it may be a quarter or two away from the bottom. Yet even with DRAM, there appears to be light at the end of the tunnel. Micron grew DRAM shipments 30% quarter over quarter, but average selling prices fell 20%. Still, the return of bit demand shows that customers have worked through their excess inventory during the first half of the year. Management cited strong demand from 5G, cloud data centers, and graphics as catalysts for broad-based bit demand.

Importantly, management said that as its DRAM inventory has come down, it has begun walking away from some deals, "as we look to optimize our profitability." That seems to indicate confidence that pricing won't fall too much further than recent low-price offers.

In another third-party data point, the research site DRAMeXchange recently reported PC DRAM contract pricing had begun to flatten in August, and that prices had been "holding steady" in September. Though this only applies to PC DRAM specifically and not the entire DRAM industry, flattening prices would be a big deal. Micron has experienced quarterly DRAM price declines of about 20% in each of the past three quarters, meaning it's selling each DRAM bit for about half the price as at the beginning of the year!  Even with last quarter's strong bit growth, it only brought DRAM bit growth to low single digits for the full year, far below the long-term forecast of 15% to 20%.

Finally, DRAMeXchange also projects the three major DRAM producers will all continue to cut their DRAM-related capital expenditures (capex) by at least 10% in 2020, and that's following a 2019 where capex growth was already muted. DrameXchange forecasts total DRAM industry bit-production growth to be 12.5% next year -- the lowest in 10 years. For its part, Micron expects overall capital spending on front-end equipment (the machines that help increase output) to decline 30%.

The current increase in bit demand, combined with industry cutbacks in supply, should help pave the way for bottoming DRAM prices in the near future, and a potential upturn sometime in 2020.

Micron's violent sell-off shows the market is clearly worried about something: specifically, its forward guidance. Despite calling for increased revenue, the company guided for gross margins to fall to 25% to 28%, and earnings per share falling slightly to $0.39 to $0.53, compared with the recent quarter's 31% gross margins and EPS of $0.56.

That's a mild disappointment, but not the end of the world. In addition, the recent quarter's margins actually exceeded the high end of Micron's previous guidance ranges of 27.5% to 30.5%, and $0.38 to $0.52. If you'll notice, the current EPS guidance is actually higher than last quarter's initial guidance was.

The margin declines also seem to be a symptom of burning off excess inventory. Micron's days of inventory fell from 143 to 131 during the last quarter, an improvement for sure, but still higher than normal. Since current sales are coming from inventory produced earlier in the year, the cost is likely higher than the bits being produced on leading-edge nodes today, because costs tend to come down over time. Higher-cost inventory sold at today's lower prices should naturally lead to some DRAM margin compression, but the margin picture should improve as older inventory gets sold off, and supply and demand come into balance.

Basically, while investors may have been looking for the past quarter to be the bottom for Micron's margins, the margin guidance may have been a slight disappointment. But forward margins appear to be a noisy blip as the industry finds its bottom. Long-term investors shouldn't concern themselves with a one- or two-quarter delay before the next upturn, if they believe in the long-term growth of memory-intensive applications.

4. The valuation is still screamingly cheap

Even with guidance underwhelming, Wall Street analysts are forecasting earnings of $2.54 per share in fiscal 2020, with current estimates between $1.32 and $3.80 per share. At today's market price around $43, that's only 17 times that estimated earnings figure. But that is still a below-market multiple on what should be trough earnings. And remember: Last year, Micron's fiscal 2018 had seen EPS of $11.51.

It has wisely used much of that windfall to strengthen its balance sheet, going from a $4.4 billion net debt position just two years ago to a $3.4 billion net cash position today. On top of that, it was even able to retire 7% of shares through $2.7 billion in share repurchases in 2019 while accomplishing this feat.

With Micron executing at an A+ level, signs of a bottoming-out memory cycle, and the stock selling off, I decided to increase my stake. The near-term picture is very cloudy due to the U.S.-China trade war. But given the rise of cloud computing, 5G, and other memory-intensive applications, the next upswing in the memory market seems to be a question of when, not if. Therefore, those with a longer-term horizon than the next quarter will likely benefit from picking up some Micron shares after its recent sell-off...even if they're a bit early.