The four most dangerous words in investing are said to be "It's different this time." Someone uses them at the peak of every bubble to justify ignoring lessons of the past.

But being unshakably wary of "it's-different-this-time" arguments has its drawbacks. Some things really do change over time. Paradigm shifts can legitimately amend old rules and assumptions. There's an old rule of thumb that the economy needs to create 150,000 jobs a month just to keep up with population growth. That's not the case anymore, because the population is getting older and fewer Americans are of working age. Today we need closer to 100,000 jobs to keep up with population growth, so a jobs report that looked weak two decades ago might actually be pretty good today. We can say "it's different this time" because it really, actually is.

This goes for stocks, too.

The market will crash again someday. Maybe soon. It just does that from time to time. The S&P 500 seems fairly valued at best. Perhaps a little overvalued.

But be careful when using long-term history to value the stock market. It could lead you to erroneously think stocks are in a huge bubble without realizing valuation metrics that worked in the past may need adjusting. Why? Because some things have changed. It really is different this time.

That's a real change in how companies make money. You can't just ignore it. Any historical analysis of S&P earnings or market capitalization as a percentage of the U.S. economy is misleading unless adjusted for the surge in global sales that's taken place over the past two decades.

If you take corporate profits and divide them by U.S. GDP, you get a crude measure of profit margins that looks way above the historic average. But using U.S. GDP as a denominator doesn't make sense when U.S. companies have doubled the share of business they do overseas in the past 20 years. Use world GDP as a denominator, and margins don't look that high at all: 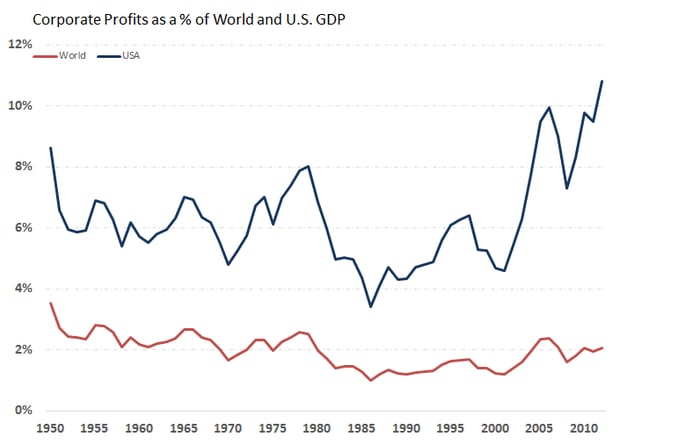 2. The dividend payout ratio has plunged
In the 1973 version of his classic book The Intelligent Investor, Ben Graham wrote:

Years ago it was typically the weak company that was more or less forced to hold on to its profits, instead of paying out the usual 60% to 75% of them in dividends. The effect was almost always adverse to the market price of the shares. Nowadays it is quite likely to be a strong and growing enterprise that deliberately keeps down its dividend payments. 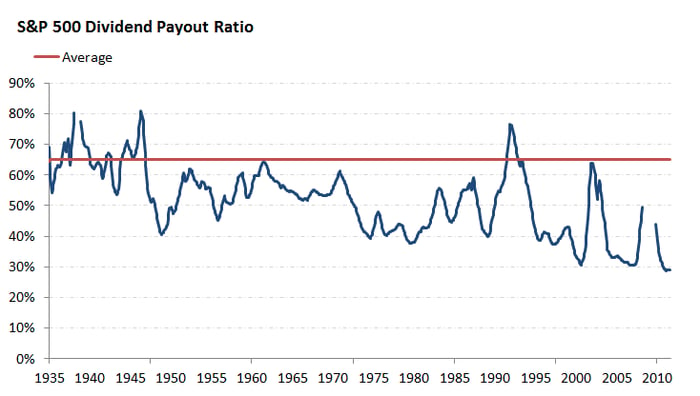 This matters. It can't be ignored when comparing the current market with the past. To me, it is one of the best explanations for why the CAPE valuation metric has been above its long-term average in all but nine months of the past 22 years.

When companies are paying out less of their earnings as dividends, they are using the leftover cash for share buybacks, acquisitions, or internal growth, or they're just leaving it in the bank.

In any of those situations, future earnings growth, or current book value, will be higher than it otherwise would have been if the payout ratio hadn't declined. That affects valuations. A company that pays out all of its earnings in dividends should trade at a lower valuation than one that uses part of its earnings to buy back shares or invest in its future.

Apple (NASDAQ:AAPL), for example, has a market cap of $470 billion, and nearly $150 billion of cash and marketable securities in the bank. So about one-third of its current market value has nothing to do with the prospect of future earnings. Instead, it represents past earnings waiting to be paid out (to be fair, repatriation taxes need to be considered as well). These kinds of stories didn't exist in the world Graham describes. And it can make Apple's P/E ratio and other valuation metrics look misleadingly high, especially when compared with long-term history.

Saying "it's different this time" is dangerous. But so is assuming nothing ever changes, and that the past is a perfect prologue. "If past history was all there was to the game," Warren Buffett once quipped, "the richest people would be librarians."