And he's right. But it's not a very relevant observation.

Explaining this requires some jargon, but it's important to understanding the unemployment rate.

The standard unemployment rate most cited in the media, called U3, is calculated by dividing:

You can tell that these leave wiggle room to produce some fuzzy figures. If you're out of work but haven't been looking for a job in the past four weeks, you're not counted as unemployed -- or even part of the labor force. You're in no-man's land.

A more complete way to take the temperature of the job market is the labor force as a percentage of the population, called the labor force participation rate. It's the best way to keep track of previous workers who have dropped out of the labor force. And as Pethokoukis hints at, it's plunged: 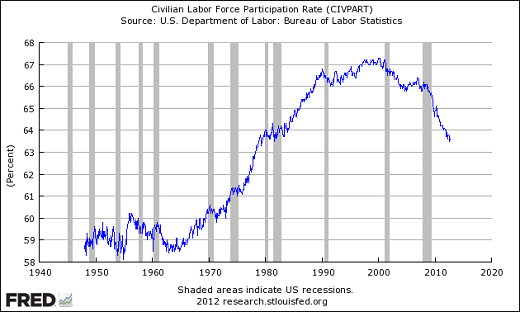 Pethokoukis is right that if we had the same labor force participation rate today as we did in early 2009, the unemployment rate would be much higher than is currently reported.

But before you shout conspiracy!, we have to ask why the labor force participation rate has dropped so much.

Yes, part of it is because many have given up looking for work, which I assume is the point Pethokoukis wants to make. But that doesn't explain all of the decline. Or even most of it. Three big explanations for the falling participation rate have nothing to do with the recession:

Let's go through each one.

The first baby boomer turned 65 last year. Many retired before then, and millions will leave the work force over the coming decade. And since the boomers are an abnormally large group, their retirement means a lower percentage of the population is of prime working age.

One of the best ways we know the falling participating rate is due to aging and not the recent recession is because most of the decline was predicted by sociologists several years before the recession began: 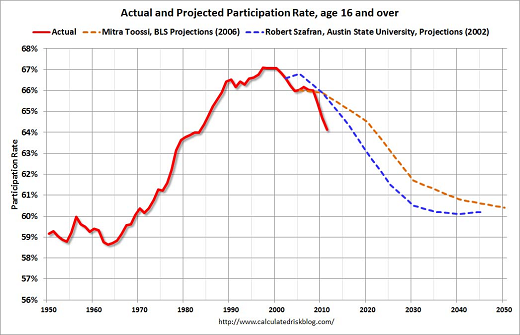 "An aging population will push down labor force participation whether the economy does well or poorly," writes the Heritage Foundation. Don't blame the president. Blame my parents.

Next, men have been fleeing the labor force consistently since the Bureau of Labor Statistics began keeping track in 1948: 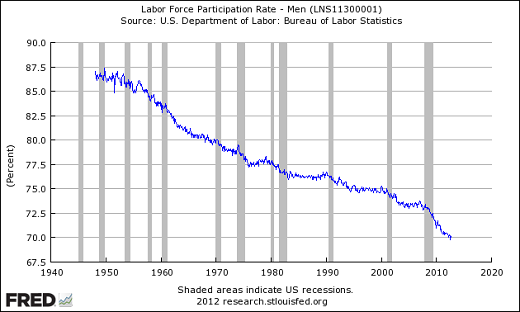 There are all kinds of explanations for this, including a changing dynamic between male and female breadwinners, increased disability benefits, and fewer opportunities in industries like manufacturing that were once male-dominated. Whatever the reason, it's clearly not linked to the last recession, or even any recession. From 1995 to 2000, when the economy boomed like never before, the labor force participation rate for males fell. For decades this was balanced out (and then some) by a surge in the female participation rate. But now that female participation is topping out, the overall participation rate suffers a net decline.

Last, the overall participation rate is falling partly because more people are in school: 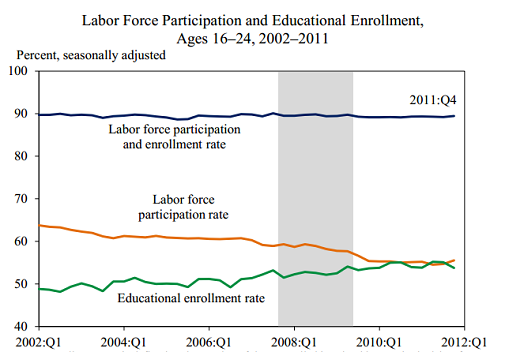 The Heritage Foundation elaborates on rising education enrollment and how it changes labor participation:

One of the greatest costs of obtaining an education is the opportunity cost of going to school. Most students cannot work full-time jobs while studying full-time. They forgo the income they could have earned in order to study. In a recession, when job opportunities decrease, this opportunity cost falls. It becomes relatively less expensive to go to school: Students only lose money by not working if they could have found a job in the first place. A weak economy will cause many people to attend school that would not otherwise.

Someone recently asked me what I think is the truest measure of our weak jobs market. My answer: The number of Americans not in the labor force has increased by 9.5 million since late 2007. Of those, 2.1 million say they want a job but can't find one. That's probably the fairest estimate of today's job shortage compared with five years ago.

Why Are So Few People Working? @themotleyfool #stocks Next Article
Current