Micron (NASDAQ:MU) CEO Sanjay Mehrotra says the price-suppressing memory chip glut of 2019 is at a turning point, and the headwind will only ease from here. As such, the next two fiscal quarters should start to show improved results.

Mehrotra may well be right about what's to come, too. The challenge to his optimism, however, is that none of the current data about DRAM or NAND pricing indicates a rebound is actually taking shape. It just indicates memory prices are settling at uncomfortably weak levels. Let's take a closer look at what all this means for the stock's immediate future.

Hitting a cyclical bottom ... at last

Micron and other makers of computer memory tech like Samsung (OTC: SSNLF) and SK Hynix have grappled with falling memory chip prices since early 2018. At that time, DRAM cost more than $6 per gigabyte. Now, it costs just a bit under $3.

Overproduction (relative to demand) is, of course, the culprit. Ditto for NAND pricing, which is now roughly one-fourth of what it was near the beginning of 2018, thanks to aggressive output from names like the aforementioned Samsung, SK Hynix, and yes, also Micron. It's a cycle we've seen from the memory industry before. 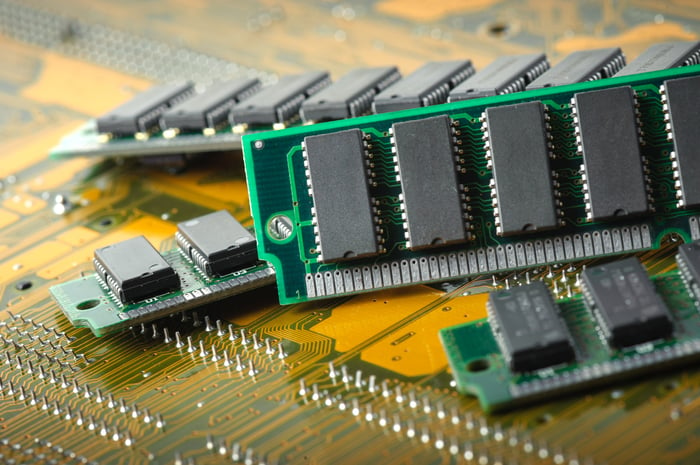 Mehrotra believes the worst is over, however. His official comment accompanying the release of better-than-expected fiscal Q1 results earlier this month read, "We are optimistic that Micron's fiscal second quarter will be the cyclical bottom for our financial performance," anticipating a wave of fresh technology investments looming next year. Separately, he explained in an interview with MarketWatch, "There will be continuous improvement, and in Q3, gradual recovery, and continuous momentum in Q4."

It's possible because anything is possible. Just for the record, though, neither the price trend nor the production trend -- nor the demand trend, for the matter -- supports his thesis.

In Mehrotra's defense, the pricing data won't decidedly make a turn for the better until the glut has reversed. Expanding demand comes before a shrinking supply, and DRAM or NAND prices won't recover until after the marketplace understands that higher prices can be realized.

One would still expect to see at least modest changes for the better on the pricing front, though, if a recovery was underway. We're not.

Yes, both have effectively flatlined following this year's meltdown, which is better than further deterioration. Neither has actually hinted at a turn for the better, though. Computer-parts pricing site PC Parts Picker indicates the current retail cost of two 8 GB DRAM chips is near $90, right back at the multiyear lows hit earlier this month. The trend is shallow, but still technically ebbing lower.

Solid state storage drives (SSD) -- the technology on which you install apps and programs and save files -- are still in a slump, too. A 1 terabyte SSD now sells for right around $160, down from nearly $300 early last year, and still near the multiyear low near $150 hit in October. And like DRAM prices, NAND pricing is still technically drifting lower.

Likewise, we would expect to see at least a modest curb of total memory output if manufacturers were truly looking to support prices. But we've not seen that either; actually, we've seen quite the opposite. TrendForce's memory market data website DRAMExchange reports that November's output of 2 GB (or equivalent) memory chips tied for the highest monthly production of the entire year. The tie was with October's output, by the way, extending a broad increase in output since the beginning of 2019.

Some of the most recent swell has to be attributed to China's new DRAM manufacturer ChangXin Memory Technologies, which only began production in late September. Given China's global trade history, though, it wouldn't be a stretch to suggest ChangXin has little interest in helping maintain a healthy balance between DRAM supply and demand.

If a real end to the glut was now upon us, one would expect to see at least fleeting glimmers of its beginning.

Never say never, of course. In fact, there's little doubt that memory prices -- both types -- will rebound sooner or later. The question is, how quickly and to what extent? Mehrotra is painting an encouraging picture, and investors are buying into it. The rhetoric, however, doesn't jibe with the data currently on the table.

To that end, almost a year ago to the day, Mehrotra was talking about a pricing rebound taking shape during the second half of 2019. The second half of the year is now almost over, and there's still no demonstrable recovery. Matters are actually getting slightly worse. If that year-ago call was wrong -- or at least too early -- the newest one could be, as well.

The one bright spot? At least Micron is selling more memory tech at dirt cheap prices.