Please ensure Javascript is enabled for purposes of website accessibility
Log In Help Join The Motley Fool
Free Article Join Over 1 Million Premium Members And Get More In-Depth Stock Guidance and Research
By Daniel B. Kline - Mar 20, 2020 at 1:28PM

The company reaffirmed its plans at its virtual annual meeting.

Share buybacks are a way to return capital to shareholders while giving the company a bigger share of its own stock. In theory, it could use that stock down the road to fund an acquisition or reissue it to raise money for a new project. 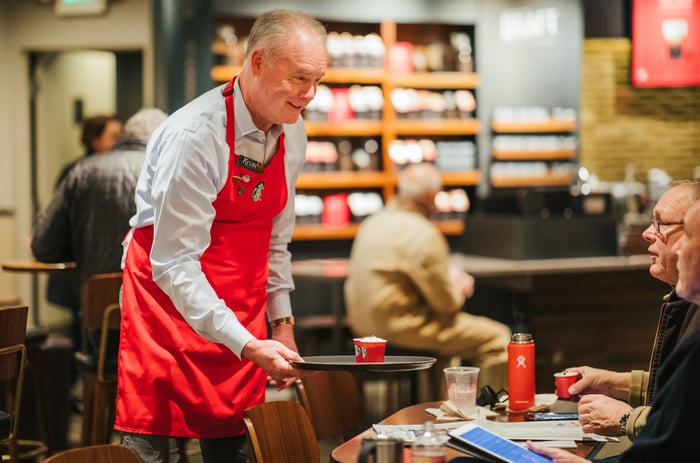 Last year, Starbucks returned $12 billion in capital to shareholders via dividends and stock buybacks of roughly 140 million shares. Offering up a new plan for 2020 -- a year the company has suffered massive disruption due to coronavirus in its two biggest markets as well as much of the world -- shows just how strong the chain's business has become.

"Starbucks has the financial strength and resilience to manage through this extraordinary time, guided by our Mission and Values," said CEO Kevin Johnson in a press release. "The increase in our share repurchase program reflects our confidence and optimism about the long-term growth opportunity for our business."

Share buybacks generally bolster a company's stock price. That's a good move for the chain, which can buy back shares at somewhat of a discount while keeping prices from falling as far as they might. This move is also Johnson showing confidence that normal will return and Starbucks will get back to growth.