These drugs could be key to staving off COVID-19 until a vaccine is developed.

With no antibodies built up in the population, no known cure, and no existing vaccine against COVID-19, some may fear that there's no hope for those suffering with the disease now or in the future. However, there have actually been green shoots of positive results from several existing anti-viral and anti-inflammatory drugs already on the market, albeit on an anecdotal basis.

While no official U.S. trials have been completed and data is scarce, anecdotal successes with these drugs are giving people hope, and the government is now loosening red tape to get them where needed as fast as possible. Here are all the treatments that have been effective against COVID-19 in certain cases, and the companies that make them. 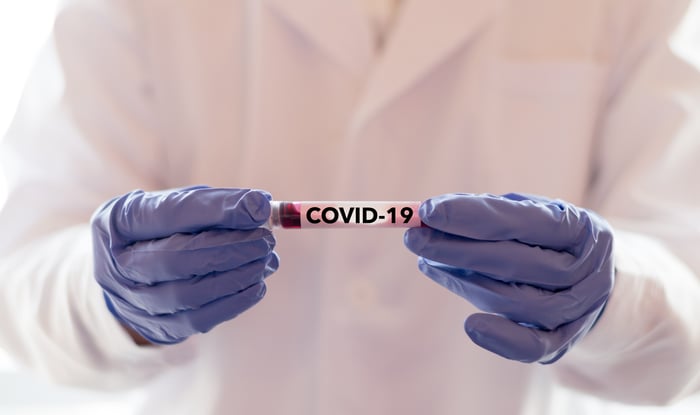 Are these drugs effective against COVID-19? Image source: Getty Images.

Remdesivir is an antiviral drug made by Gilead Sciences (GILD 0.90%) that was originally developed to treat Ebola. Remdesivir had not been on the market, as it had not been found to be as effective against Ebola as other drugs, but a past study showed it to have been effective against Middle East respiratory syndrome (MERS), another coronavirus, in mice.

Encouragingly, a recent Wall Street Journal article detailed the supposed success of remdesivir in treating patients from the Diamond Princess cruise ship in Japan. Four out of 14 critically ill patients from the ship were given the drug, along with three others from Japan. As of March 17, when the article was published, all seven patients were still alive, though some remained critically sick. The drug appeared to reduce the need for ventilator support. The doctor who treated these patients said it "certainly has the feel that the drug was doing something" but added, "It's almost impossible to prove it."  In addition to the cruise patients, a 35-year-old man in Washington state also reportedly improved one day after taking Remdesivir after being admitted to the hospital and initially requiring oxygen.

On March 19, the Trump administration cleared remdesivir for "compassionate use," which means that the drug was approved to be used for severely ill patients in the U.S., even though no clinical trials have been completed.

The other drug approved for compassionate use is chloroquine, or hydroxychloroquine, which is actually a very old drug used to treat malaria and is now generic. Recently, drugmaker Mylan (MYL) announced that it was ramping up production of the drug in response to COVID-19. European drugmaker Bayer (BAYR.Y 0.71%) is also reportedly donating 3 million tablets to fight the disease.

Chloroquine works by inhibiting a different process in the viral infection than Remdesivir, by inhibiting glycosylation, which is a chemical process in the virus' outer shell. Currently, scientists in both China and France have touted promising results in patients using chloroquine, but again, these were not in official trials and the evidence is only anecdotal. The drug did get a write-up in a 2005 CDC paper that showed its effectiveness in SARS-infected primate cells -- though not live animals.

Particularly encouraging were results published by French infectious-disease expert Didier Raoult, who said that the COVID-19 patients he had treated "had seen a rapid and effective speeding up of their healing process, and a sharp decrease in the amount of time they remained contagious" after taking Chloroquine. In addition, a new U.S. study published on March 13 also apparently came to the same conclusion, saying:

Use of chloroquine (tablets) is showing favorable outcomes in humans infected with coronavirus, including faster time to recovery and shorter hospital stay. ... Research shows that chloroquine also has strong potential as a prophylactic (preventative) measure against coronavirus in the lab, while we wait for a vaccine to be developed.

While no official trials have been completed, apparently enough scientists are seeing anecdotal results from chloroquine that it will go forward with compassionate use cases. That being said, chloronique can also reportedly be deadly if one takes more than the recommended daily allowance of one gram, according to a report from Bloomberg.

In addition to these two drugs that have been approved for compassionate use, favipiravir, also known as Avigan, is an antiflu drug that was developed by a subsidiary of Japanese company Fujifilm (FUJIY 1.16%) in 2014. It has also gotten some press recently as a possible treatment for COVID-19.

In China, a trial involving 340 people showed that favipiravir allowed patients to turn negative for the disease in a median of four days, versus the 11 days for those not treated with the drug. China's science and technology minister, Zhang Xinmin, called the drug "clearly effective" on the basis of this study. In addition, X-rays showed that those treated with the drug had less lung damage that those who weren't.

Still, there were some shortcomings, as Favipiravir apparently doesn't work as well in people who are already severely ill, according to Japanese health officials.

One way in which COVID-19 can kill patients isn't through the virus itself, but sometimes through an overly aggressive immune response in the body that goes overboard and starts killing healthy lung tissue. In addition to drugs that directly or indirectly attack the virus, another approach is to treat the severe immuno-inflammation of the lungs, which can cause lethal complications from COVID-19.

On that front, there are two existing drugs some think are effective, including Kevzara, which was jointly developed by Regeneron (REGN 0.61%) and Sanofi (SNY 2.52%), as well as Actemra, which is developed by Roche Holding (RHHBY 0.91%). Both drugs act in similar ways and were developed to treat rheumatoid arthritis.

A recent Wall Street Journal article detailed how Actemra has apparently produced successful anecdotal results in China. According Regeneron's Chief Scientific Officer George Yancopoulos, patients who received Actemra in China, "got out of death's bed and walked out of the hospital." However, once again, this was a small and uncontrolled sample size.

Both Actemra and Kevzara block the interleukin-6 (IL6) protein, which triggers the body's immune system. By blocking IL6, doctors can potentially stop the overly aggressive immune response from attacking the body. However, a potential downside is that it can leave the body vulnerable to infection, since its design is to lower the immune system's effectiveness.

Regeneron is looking to start trials in the New York area, and Sanofi is looking to conduct trials in France. Roche has initiated a phase 3 trial and will begin enrolling patients in April.

Are these companies buys?

While some may be tempted to throw their investment dollars behind these biotechnology companies, the financial payoff is still uncertain. Many companies are quickly shipping out these drugs for compassionate use and will worry about pricing later on.

For instance, Gilead has received heavy criticism in the past for the high pricing of its HIV and hepatitis C drugs, and it's unclear what type of pricing these drugmakers will be able to recoup from legacy drugs, especially once a vaccine is developed in one to two years. In addition, there are other details that may need to be worked out. For instance,  Kevzara was jointly developed between Regeneron and Sanofi, and the drug was slated to go to Sanofi as part of a restructuring of both companies' R&D efforts. However, that hasn't been finalized yet, so there could be more legal machinations over the drug should it prove clinically effective.

Nevertheless, having these companies come to the rescue may go a long way toward warding off political pressure to cap drug pricing. Drug pricing has been a key issue in this election year, so if these companies can come prove heroic with their prior research and development efforts for COVID-19, it could pay off in terms of lower regulation down the road for the industry as a whole.