Please ensure Javascript is enabled for purposes of website accessibility
Log In Help Join The Motley Fool
Free Article Join Over 1 Million Premium Members And Get More In-Depth Stock Guidance and Research
By George Budwell - Mar 22, 2020 at 9:40AM

The coronavirus pandemic has been bad news for nearly every type of asset class in 2020. On the flip side, this indiscriminate wave of selling has undoubtedly created some amazing buying opportunities for long-term investors. Biotech stocks, for instance, were particularly hard hit by the market's "man with a hammer" behavior over the past two weeks.

What's noteworthy about the biotech space is that these companies should prove to be largely immune to any economic downturn. People aren't going to stop taking their prescription medicines. after all. What's more, some biotechs are already playing a critical role in the battle against the COVID-19 illness by accelerating the development of novel medicines and vaccines. In short, opportunity knocks for those brave souls willing to buy biotechs in this volatile and exceedingly moody market. 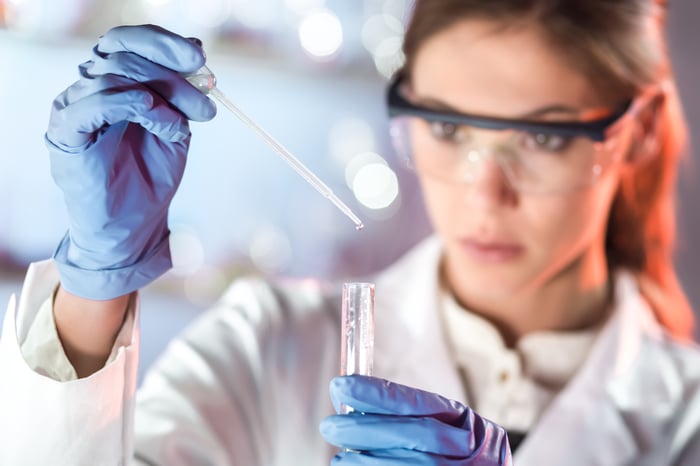 Which biotech stocks are simply too cheap to ignore right now? Amicus Therapeutics (FOLD -2.71%), Bicycle Therapeutics (BCYC -1.99%), Catalyst Pharamceuticals (CPRX -0.07%), Inovio Pharmaceuticals (INO -4.43%), and Novavax (NVAX -6.29%) all have the potential to deliver life-changing gains for risk-tolerant investors. Here's what you need to know about these five absurdly cheap biotech stocks.

Amicus Therapeutics: A leader in the field of rare diseases

Amicus is a rare-disease drugmaker that's held up fairly well against the wave of panic-selling this year. So far in 2020, for instance, the company's shares have lost only about 11% of their value, compared with the nearly 30% losses posted by some of the broader market indices. Amicus' resilence in this trying time is due to its Fabry disease treatment Galafold, its upcoming Pompe disease therapy called AT-GAA, and a host of experimental-stage gene therapies for a variety of rare diseases.

The big headline is that Amicus should sport no less than $2 billion in annual revenue by the middle of the decade, and it has a real shot at generating a far greater amount in the second half of the 2020s, perhaps in the area of $5 billion. To put these revenue projections into context, Amicus' market cap currently sits at $2.2 billion. So unless the whole world falls apart, this orphan-drug maker should turn out to be an absolute steal at current levels.

Bicycle Therapeutics isn't a particularly well-known name among biotech investors, given that its IPO was only last year. However, this novel immunoncology company is poised to potentially take the field by storm over the next few years. Keeping with this idea, the company recently inked two collaboration deals with giants of the industry -- one with Roche and the other with Cancer Research UK -- to advance its proprietary bicyclic peptide platform.

The basic idea is to develop therapies that employ the best properties of monoclonal antibodies and small-molecule drugs. By doing so, Bicycle aims to harness the therapeutic targeting power of monoclonal antibodies, and use the ability of small molecule drugs to penetrate deep inside target tissues, while also making their synthesis fairly straightforward and cost-effective.

The company is only now gearing up for a midstage trial of its anti-cancer platform, so it is a way removed from producing a pivotal-stage data readout. But its novel approach to anti-cancer therapeutics may end up attracting a sizable buyout offer soon. Bicycle, after all, is just the kind of company that tends to catch the eye of big pharma.

If you're looking for extreme bargains in this market, Catalyst Pharmaceuticals needs to be at the top of your shopping list. This small-cap rare-disease drugmaker has gotten slammed this year for no good reason whatsoever.

In a nutshell, Catalyst markets a Lambert-Eaton myasthenic syndrome medication called Firdapse. Although the drug's annual price has sparked controversy, this pricing debate has had almost no impact on its annual sales. Per the company's latest quarterly update, for instance, Firdapse is on track to haul in between $135 million to $155 million in sales in 2020. Catalyst's stock is thus trading at something along the lines of just two times 2020 sales and one and half times 2021 projected sales.

That is an absurd valuation for an orphan-drug maker. Historically, rare-disease companies trade at over 15 times annual sales. So once the market gets back on its feet, Catalyst's stock should skyrocket. Now, it may take a while for this enormous value proposition to take shape, but it will almost certainly happen at some point (barring another black-swan type of event). As such, risk-tolerant investors may want to pounce on this beaten-down biotech stock soon.

Inovio's shares have been on fire this year because of its experimental COVID-19 vaccine called INO-4800. To date, the company has received a $9 million grant from the Coalition for Epidemic Preparedness Innovations, and a $5 million grant from the Bill and Melinda Gates Foundation to supercharge the vaccine's development. As things stand now, Inovio expects to have INO-4800 in a human trial by April, with top-line data available by early fall. By the end of the year, the company plans to have approximately 1 million doses available for additional trials, or for emergency purposes.

Any company that successfully develops an effective and safe vaccine for COVID-19 will have a major cash cow on its hands. Per the latest models, the U.S. could be facing as many as 1.1 million deaths from this highly infectious respiratory disease after all -- that is, unless a vaccine or an effective anti-viral treatment emerges and emerges quickly.

As Inovio's market cap is only about $1 billion at the time of writing, it's fairly safe to say that INO-4800 could transform this small-cap biotech stock into a jackpot type equity (a stock that is woefully undervalued because the market grossly misprices the value of an upcoming catalyst).

All that being said, Inovio is far from alone in the race to develop a vaccine and the company's DNA-based vaccine platform has yet to produce a commercial-stage product. As such, eager investors shouldn't discount the serious risk associated with this vaccine play. Inovio, in short, is the epitome of a high-risk, high-reward biotech stock.

Novavax is another vaccine developer that might see a huge jump in its share price soon. This clinical-stage biotech stock is interesting for two reasons. First and foremost, the company is scheduled to release top-line data for its flu vaccine candidate, NanoFlu, before the end of March. As these data could form the basis of a regulatory filing and subsequent entrance into a multi-billion dollar vaccine market, there's no doubt that Novavax's stock would soar if these trial results hit the mark.

Second, Novavax is gearing up to trial a COVID-19 vaccine candidate of its own. The company is a few weeks behind the leaders in the space, but it does have an outside shot of morphing into a top player in the COVID-19 vaccine game. That's a big deal because Novavax's market cap of $533 million is a drop in the bucket compared to the ginormous commercial prospects of this rapidly emerging market.

Like its fellow vaccine developer Inovio, however, Novavax hasn't had any success at bringing a vaccine to market, despite multiple shots on goal in the recent past. As such, investors definitely shouldn't own more of this speculative vaccine stock than they can afford to lose. Novavax's upside potential is enticing, but its downside risk is equally as noteworthy.