Please ensure Javascript is enabled for purposes of website accessibility
Log In Help Join The Motley Fool
Free Article Join Over 1 Million Premium Members And Get More In-Depth Stock Guidance and Research
By Travis Hoium - Mar 22, 2020 at 9:13AM

The all-electric automaker isn't immune to the risks facing the auto industry today.

There has always been a fierce debate between bears and bulls about the future of Tesla's (TSLA 1.66%) stock. There's no questioning the company has disrupted the auto industry and changed the future of transportation, but that doesn't guarantee success for investors long-term. If COVID-19 sends the U.S. and even the world into a protracted recession, it could test Tesla in ways it's never seen before. Using our best and most educated guesses, here's how a worst-case scenario might play out. 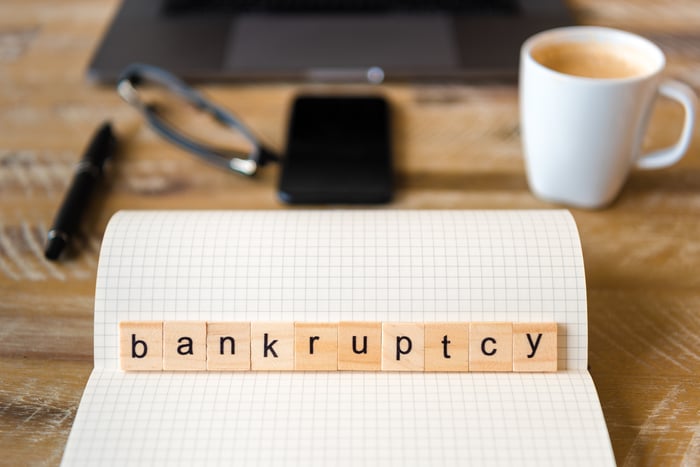 Tesla has been ordered to shut down the Freemont factory,  and the Gigafactory in Nevada might be next after a non-essential shutdown was ordered by the Governor. So we can assume that auto operations are already falling off a cliff, at least short-term.

We don't know exactly what Tesla's cash burn will be during a shutdown, but  the company's $8.8 billion in cash on the balance sheet after a $2.31 billion stock sale in February could disappear quickly.

Once manufacturing operations do start up again, the U.S. and most of the world may well be in a recession. One of the first purchases that goes out the window when tough times hit is a $50,000+ vehicle. For example, between 2007 and 2009, BMW's auto sales fell 17% and profits all but vanished. And that was without a complete shutdown of operations for weeks at a time. To put that time into perspective, U.S. GDP fell 0.3% in 2008 and 2.8% in 2009, which we called the "Great Recession."

Goldman Sachs estimates that in Q2 2020, GDP will fall by 5%. For now, it's predicting a rebound in the back half of the year, but that's not guaranteed, and GDP estimates are only declining right now. The worst-case scenario could be much worse than the "Great Recession" from a growth standpoint.

If Tesla's sales drop 20% to 25% over the next year or two from their Q4 2020 peak because of a recession, it could be devastating to cash flow and the balance sheet. Remember, Tesla has been ramping up spending to drive growth, so its cost structure isn't prepared to deal with a decline in demand.

In total, a two-month shutdown and 12 months of reduced deliveries would result in a $4.1 billion cash burn, leaving a huge hole in Tesla's current $8.8 billion cash balance.

Don't forget that Tesla's current cash level includes $726 million of customer deposits, which isn't technically money the company has earned yet. If customers ask for those deposits back, that's another potential cash drain on the balance sheet.

Assuming the estimates I've used above are accurate, Tesla has the potential for $4.8 billion of cash outflows from operations and deposits in the next 14 months.

Step 2: Markets turn their back on Tesla

If losses do start to mount, the big risk I fear with Tesla is the markets will turn their back on the company. Tesla has raised $13.4 billion in debt and finance leases, and billions more from the sale of shares to fund operations. If that inflow of cash stops at a time when demand is falling and cash burn is growing, it could be devastating for Tesla. 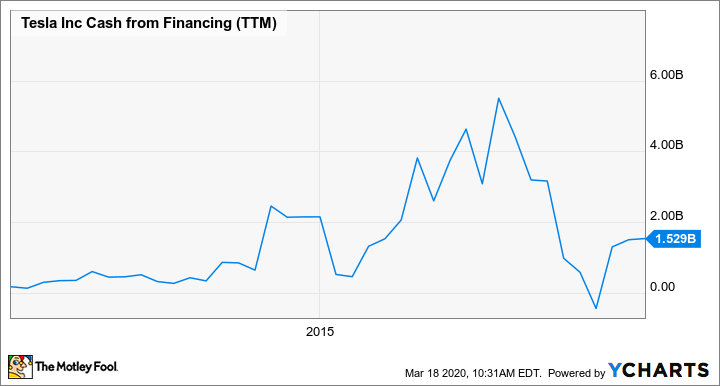 Tesla's next major debt maturity arrives in March 2021, when $1.4 billion in bonds mature. If operations haven't turned around by then, it could be tough to refinance that debt.

In the next 14 months, Tesla could be forced to come up with $1.4 billion to pay down debt. When added to the operational cash burn above, we're now at $6.2 billion out of $8.8 billion of cash potentially gone by summer 2021.

Suppliers will start watching the operating trends as well, and they could become a big cash burden on Tesla. The company had $3.8 billion of accounts payable at the end of 2020, and payables could go from being a short-term financing mechanism that acts like a source of cash to a big drain on cash as bills come due.

If cash burn grows and sales fall, suppliers could also begin asking for more onerous terms. Suppliers want to make sure they get paid; terms like payment in 90 days don't look attractive if a company seems like it's running into financial difficulty.

Tesla has also provided some guaranteed order commitments with suppliers. We don't know the exact terms, but Tesla outlines purchase obligations of $5.7 billion in 2020, $2.9 billion in 2021, $3.6 billion in 2022, and a total of $16.3 billion in future commitments. That's a lot of cash committed in the future.

We don't know the exact cash burden payables or purchase obligations would place on Tesla if demand for vehicles falls. But if we just assume that sales decline by one-quarter in the next year, we could also assume that payables will do the same. That alone would be a cash burden of $942 million. When combined with what I outlined above, Tesla's $8.8 billion of cash is now down to roughly $1.7 billion, which is probably near the low end of what it needs just to keep the day-to-day operations of the business running.

It may seem inconceivable now, but Elon Musk himself could ultimately be a problem for this auto stock if shares continue to fall. As of Feb. 12, 2020, Elon Musk had taken out personal loans of $548 million from a variety of banks, using his shares of Tesla as collateral. We don't know at what point those loans might start getting called, and Musk might be forced to sell those Tesla shares, but don't discount the thought that it could happen.

In 2008, margin calls on Chesapeake Energy CEO Aubrey McClendon's loans forced him to sell more than 30 million shares of Chesapeake Energy stock in three days, nearly wiping out his stake in the company. In 2012, Green Mountain Coffee Roasters founder Robert Stiller got a $123 million margin call that forced him to sell a big chunk of his shares and led to him losing the role of chairman of the company. Both of these margin calls accelerated the decline of stocks that were already in freefall, so we know it's happened before.

Executives don't expect margin calls, and when we see them, it's because those executives were caught flatfooted by a rapidly declining stock price. Let's assume margin calls wouldn't arrive until the loans reach 25% of the value of the Tesla shares Musk used as collateral. At worst, we would have to see the value of his shares fall to about $2.2 billion. That would mean Tesla's market cap would need to fall to $11.8 billion, or about $64 per share. Musk doesn't have all of his shares pledged as collateral, so margin calls would actually come much sooner than $64 per share. And if they ever come, it could cause further panic in Tesla's stock.

Step 4: The downward spiral sets in

Companies rarely go bankrupt from one single factor; often, their downfall arrives when a series of events start building on each other. If Tesla's stock falls, it will be seen as a higher-risk company, which may lead buyers to question Tesla's ability live up to commitments to warranties, improving service centers, and even growing the supercharger network. This leads to fewer sales and a worse financial position, which leads suppliers to demand more onerous terms, which leads to a cash drain, and so on.

Once the narrative sets in with consumers, suppliers, and investors, it's tough to break. Tesla has been riding an upward spiral of momentum from almost every corner of the market for years. In the next few months, we may see how the company handles the kind of momentum found in a downward spiral.

Note: Beware of the black swan

What I've outlined above is mostly run-of-the-mill operational declines that happen in the auto industry during a recession. But black swans, or unforeseen and low-probability events, can happen as well during times of crisis. The U.S. could pull autopilot from the market after an accident; there could be a strike at a factory; customers could default on loans and leases en masse. Any black swan could accelerate the decline in Tesla's business and its stock.

Know the risks in any investment

What I've written isn't a prediction that Tesla will go bankrupt. In fact, I think the company has started to turn a corner to sustainable operations that could absorb a disruption like a global recession. But investors should understand how their investment thesis can go wrong and learn from past events.

Auto companies have a history of running into financial trouble during recessions. Tesla's reliance on continuous funding from public markets could conceivably be shut off. And Elon Musk's risk-taking nature could eventually become a detriment. Tesla faces very real risks, and it's not immune to the economic realities that COVID-19 is presenting to every business today.