Please ensure Javascript is enabled for purposes of website accessibility
Log In Help Join The Motley Fool
Free Article Join Over 1 Million Premium Members And Get More In-Depth Stock Guidance and Research
By Reuben Gregg Brewer - Mar 22, 2020 at 9:33AM

Dominion Energy is buying school buses in Virginia, which seems odd -- until you take a closer look. Here's why it's a good thing.

Dominion Energy (D 1.45%) is one of the country's largest electric and natural gas utilities. It has shifted and changed over time, most recently exiting the oil and gas exploration business roughly a decade ago.

So, really, the idea that it is buying school buses isn't as outlandish as it might sound at first. However, far from just accepting this, it pays to dig in and get a better understanding of why Dominion is doing what it's doing. In the end, the utility isn't looking to be a transportation company -- it's just looking to be a better utility. Here's what you need to know.

Dominion Energy is a typical boring utility these days, owning electric and natural gas assets across 18 states that serve around seven million customers. That said, it can make aggressive moves at times, like building a liquified natural gas export facility, or -- on a larger scale -- buying financially troubled SCANA at the start of 2019. SCANA got itself into a mess after it canceled plans to build a nuclear power plant following the bankruptcy of its contractor, Westinghouse. It wasn't exactly a smooth transaction for Dominion, given that SCANA's customers and regulators were displeased with the financial impact of the nuclear plant cancellation. But Dominion was persistent, and after some negotiation it managed to get the deal done, expanding its reach into additional high-growth markets. 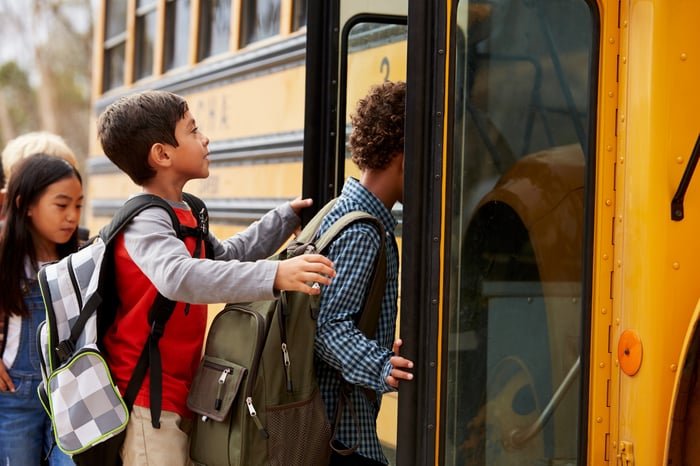 The flip side of moves like these is that Dominion's leverage and payout ratio are on the high side for a utility at this point. That's led the company to pull back on dividend growth plans until this pair of issues has been dealt with, and dividend hikes are likely to track along in the low-single digits for at least a few years. Leverage, meanwhile, isn't an easy issue to fix because of the nature of the utility sector. Dominion needs to keep spending money on capital investment projects in order to appease the regulators that control the rates it can charge customers. Over time, though, increased earnings should help to reduce leverage.

Spending money to make money is just par for the course in the regulated utility space, however. In 2020 alone Dominion intends to spend around $8 billion, with roughly 30% earmarked for maintenance spending and the rest targeted to growth. Both are important, given that regulators look at reliability and the need for expansion when they consider rates.

That's where we get to Dominion's school bus aspirations. One of the biggest issues in the world today (other than COVID-19) is protecting the environment. Spending on things that help do this is likely to be viewed positively by regulators. Dominion, for example, has pledged to have net zero carbon and methane emissions across both its electric and natural gas businesses by 2050. A laudable goal for sure -- whether or not it is achievable is another issue. But it certainly puts a clean-energy (and hopefully regulator-friendly) spin on the growth investments that Dominion is making.

Dominion's clean energy efforts include a vast array of things, such as working to build a massive offshore wind farm, attempting to turn animal waste into a reliable (and disgusting but renewable) source of natural gas, and buying 50 school buses. Some of these efforts are bigger than others, and some may fall short of their goals. But Dominion is clearly working hard and in varied ways to live up to the zeitgeist of the moment and to appease its various regulators. It has already reduced carbon emissions by 47% since 2005, and methane, an even more troublesome greenhouse gas, by 24%. 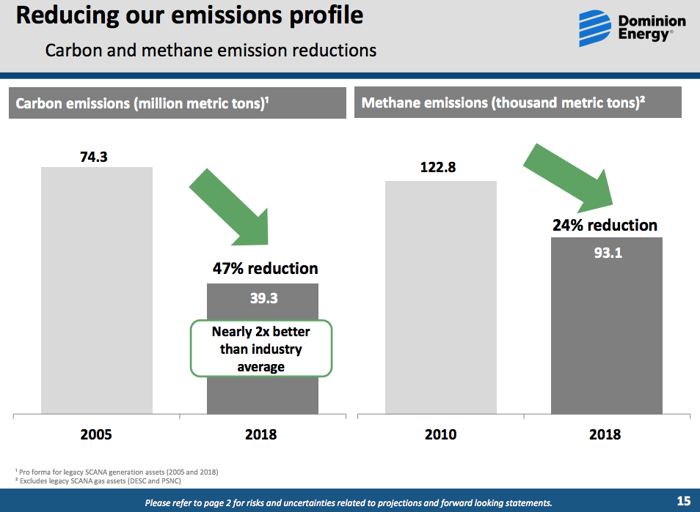 The bus move is interesting because it speaks to a much bigger opportunity. As you might expect, the buses are going to be battery powered. Since they are fleet vehicles with predetermined routes (and thus well-defined power needs), electrification makes a good deal of sense. By 2025 Dominion hopes to have the fleet up to 1,500 buses. The first level here is pretty obvious: Electric busses reduce the harmful emissions that would normally go with combustion engines. The second level is also a net positive for Dominion: electric buses will increase the demand for the electricity the utility sells.

However, it is the third-level view that's the most interesting: When not in use, the buses will act as grid storage. One of the big problems with renewable power, like the wind and solar energy Dominion is increasingly building, is that it is intermittent. Worse, these sources of energy are often creating power at times when it isn't needed. So you risk getting too much power when you don't need it and too little when you do, unless you can find a way to economically store excess electricity for use at later times. Big batteries are one of the methods being looked at on this front, but they are expensive and only do one thing.

Dominion is hoping that its bus program will create a 60 megawatt battery that serves two purposes in one. And that's just the start: The utility estimates that the 1,500-bus goal only accounts for around 12% of the buses in Virginia, where the project is located. So if this pilot program works as planned, there's a lot more room to expand this clean energy effort. In the end, Dominion's intention to buy 50 school buses is much bigger than it seems at first blush.

More than one plan

Dominion has to spend money to make money as it seeks regulator approval for the rates it charges its customers. Today clean energy is an integral part of that spending. There are a lot of different things going on at the utility that are worth watching -- buses are only one small piece of the total picture. However, this effort helps show that Dominion is thinking aggressively and outside the box. There's no way to tell if it can achieve its net-zero 2050 goals at this point, or if the bus idea will work as well as hoped. But if it keeps doing things like buying clean-energy school buses, it will likely continue to keep appeasing its regulators.

Investors should watch the big picture goal here (net zero by 2050), but it pays to understand some of the smaller parts (like buying 50 buses) to see just how Dominion is playing the renewable energy game.