Please ensure Javascript is enabled for purposes of website accessibility
Log In Help Join The Motley Fool
Free Article Join Over 1 Million Premium Members And Get More In-Depth Stock Guidance and Research
By Matthew DiLallo - Mar 24, 2020 at 9:29AM

These high-yielding energy stocks have taken a beating in recent weeks.

Dual system shocks have upended the energy market in recent weeks. The COVID-19 outbreak is grinding the global economy to a halt, which is causing energy demand to crater. At the same time, oil supplies are surging because of the collapse of OPEC's production support agreement with Russia.

These two issues have torpedoed energy stocks. Oil giant Chevron (CVX 2.44%) has tumbled more than 50% in recent weeks, while renewable energy producer NextEra Energy Partners (NEP -0.14%) has plunged more than 30%. Those sell-offs likely have investors wondering which of these high-yielding energy stocks is the better buy right now. Here's a look at the case for and against buying either one. 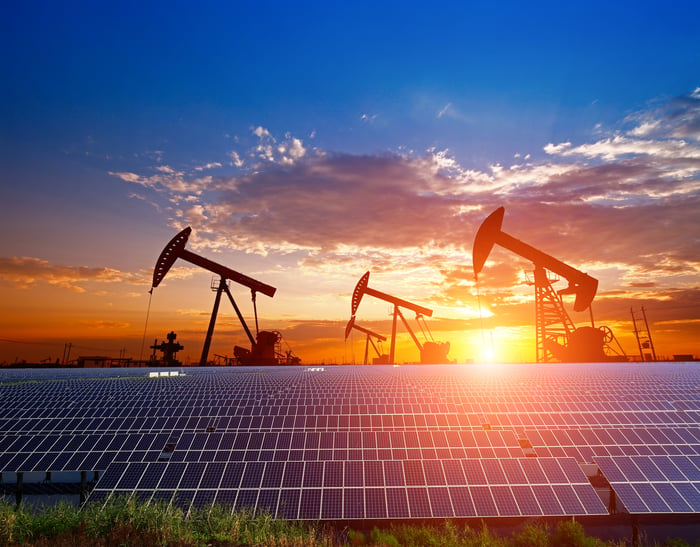 The bull and bear case for buying Chevron

The price of crude oil has cratered more than 50% this year and was recently trading in the low $20s. That's well below the worst-case scenario most oil producers could have envisioned. And now Chevron is considering changes to its operating plan just weeks after affirming its strategy, which assumed oil would average $55 a barrel in the coming years.

It's not yet clear what Chevron will do, other than possibly reducing its capital spending plan from its current range of $19 billion-$22 billion per year through 2024. Given its strong balance sheet, the company will probably be able to continue paying its dividend, which has seen its yield rise above 9% following the plunge in its stock price over the past few weeks. While that's an attractive income stream, the company can't sustain that payout forever on the cash flows produced at $20 oil.

On one hand, Chevron's stock has massive upside from here if oil prices recover, which is certainly possible once the COVID-19 outbreak fades, and Russia and Saudi Arabia end their price war. However, if the pandemic permanently destroys oil demand and the price war between Russia and Saudi Arabia doesn't stop, then Chevron's stock could have further to fall. It also might eventually need to reduce its dividend. On top of those near-term concerns, the long-term outlook for oil demand is growing more questionable as the global economy continues to transition to cleaner sources.

The bull and bear case for buying NextEra Energy Partners

NextEra Energy Partners stands to benefit from that continued pivot toward clean energy, since it focuses on generating renewable electricity and operating natural gas pipelines. However, it still has taken a beating during the energy market meltdown, despite its lack of exposure to the oil market. The sell-off has pushed the yield on the company's dividend up above 6%.

That high-yielding payout, however, seems to be on a more sustainable footing than Chevron's because NextEra Energy Partners has much less volatility in its cash flow. That's because it sells the renewable power it generates via long-term, fixed-rate contracts, while the gas pipelines it operates also produce stable fee-based income. Meanwhile, the company only pays out about 70% of its cash flow through its dividend, which provides it with a bit of a cushion.

If there is one concern with NextEra Energy Partners, it's that it doesn't have the balance sheet strength of Chevron, which has one of the highest credit ratings in the energy market. However, it does have the backing of top utility NextEra Energy (NEE -0.39%), which has one of the best credit profiles in the electric utility space. That relationship leads NextEra Energy Partners to believe it can grow its high-yielding dividend by 12% to 15% per year through 2024 as it acquires additional clean energy assets from its parent.

While Chevron's stock has fallen further and it offers a higher yield, it's not yet clear what the future holds for the oil market. Crude prices could remain low for a long time, which might force Chevron to reduce its dividend.

NextEra Energy Partners, on the other hand, has minimal volatility in its cash flow thanks to the long-term, fixed-rate contracts it has in place. That puts its dividend on a much more sustainable footing. Add to that the visible upside ahead in the renewable energy sector, and NextEra Energy Partners looks like the better buy right now.