Please ensure Javascript is enabled for purposes of website accessibility
Log In Help Join The Motley Fool
Free Article Join Over 1 Million Premium Members And Get More In-Depth Stock Guidance and Research
By George Budwell - Mar 24, 2020 at 8:11AM

Shares of Novavax (NVAX -1.17%), a developmental-stage vaccine company, are gearing up for a potentially monstrous day today. In early pre-market trading Tuesday moring, the biotech's shares were already up by a healthy 42.1% in response to a positive late-stage data readout for its experimental flu vaccine NanoFlu.

The company reported that NanoFlu met the trial's primary endpoints across all four flu strains examined in adults aged 65 or older, and it exhibited a safety profile comparable to Sanofi's Fluzone Quadrivalent, a U.S.-licensed quadrivalent influenza vaccine. Novavax thus plans on approaching the U.S. Food and Drug Administration (FDA) about an accelerated regulatory filing for the vaccine later this year. 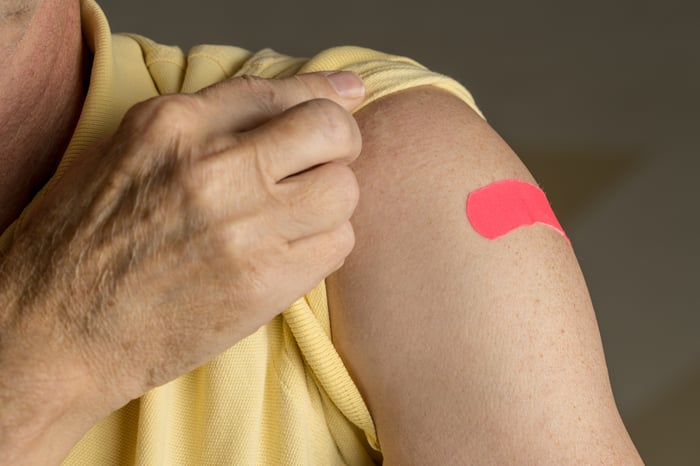 There is a well-documented need for more effective flu vaccines, especially in older adults. NanoFlu is specifically designed to help prevent seasonal influenza in the elderly. The good news is that these late-stage data do seem to support the vaccine's use in this particular patient population, at least based on the top-line readout provided by Novavax this morning. Commercially speaking, NanoFlu is targeting a multi-billion dollar vaccine market. That's a massive opportunity for a company that ended yesterday's trading session with a market cap of less than $600 million.

Is Novavax's stock a buy on this news? There are a lot of moving parts to consider with this rapidly developing story. First off, Novavax is highly unlikely to even retain the commercial rights to this experimental flu vaccine. If big pharma is impressed with these late-stage data, Novavax will almost certainly ink a global licensing deal soon, perhaps one that sports a large upfront cash payment and double-digit, tiered royalties to boot.

Alternatively, Novavax may simply sell itself to the highest bidder, which is probably the wisest move overall. The bottom line is that this company doesn't have the resources or infrastructure to properly market a commercial-stage product. So, a buyout is arguably in everyone's best interest.

That being said, big pharma rarely buys late-stage vaccine companies for a variety of reasons. In this case in particular, the FDA may request another trial before approval, despite the glaring need for an effective flu vaccine for senior citizens. That's a wild card on the regulatory front that's impossible to predict. But it's also probably the reason Novavax's shares aren't up by a whole lot more this morning.

All told, Novavax's investing thesis just got a lot more compelling with these late-stage trial data, but there is still a lot of risk on the table. So, if you are going to buy this biotech stock on this news, it's probably best to take a measured approach by buying shares in small batches, as this story unfolds in the weeks and months ahead.