Please ensure Javascript is enabled for purposes of website accessibility
Log In Help Join The Motley Fool
Free Article Join Over 1 Million Premium Members And Get More In-Depth Stock Guidance and Research
By Scott Levine - Mar 25, 2020 at 10:12AM

The drone delivery subsidiary of United Parcel Service (UPS 0.03%), UPS Flight Forward (UPSFF), announced yesterday that it will work with Wingcopter, a German manufacturer of electric vertical takeoff and landing aircrafts, to develop package delivery drones which will be used both in the United States and internationally. Ultimately, UPSFF aspires to build a diverse drone fleet that can provide delivery solutions across a range of situations.

Bala Ganesh, vice president of the UPS Advanced Technology Group, said that the collaboration with Wingcopter "helps pave the way for us to start drone delivery service in new use-cases. UPS Flight Forward is building a network of technology partners to broaden our unique capability to serve customers and extend our leadership in drone delivery." 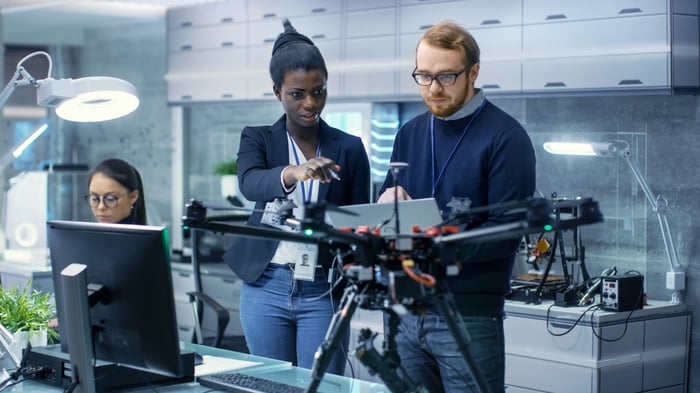 This is not the first foray into drone flight for UPS. In March 2019, UPSFF began using unmanned drones to deliver medical samples to WakeMed Hospital in Raleigh, North Carolina. In October, UPSFF received the first certification, Part 135 Standard, from the Federal Aviation Administration to "fly commercial drone deliveries outside the visual line of sight⁠." Following this achievement, UPS announced a partnership with CVS Health to collaborate on drone delivery uses such as the delivery of prescriptions and retail products to CVS Pharmacy customers.

According to Wingcopter, the appealing aspect of its aircraft is its ability weather turbulent flying conditions. The company says this is due to the drone's "patented tilt-rotor mechanism, which enables a seamless transition between two drone modes: multicopter for hovering and fixed-wing for low-noise forward flight."