Please ensure Javascript is enabled for purposes of website accessibility
Log In Help Join The Motley Fool
Free Article Join Over 1 Million Premium Members And Get More In-Depth Stock Guidance and Research
By Will Healy - Mar 26, 2020 at 1:48PM

The company has remained profitable, but COVID-19 will only add to the headwinds the company faces.

Macy's (M 9.91%) stock fell by more than 20% on March 23 after the Cincinnati-based retailer famous for its Thanksgiving Day parade saw investors bail out as the company suspended its dividend.

That day, shares closed at just $4.81 per share, though they have since recovered to $6.61 as of this writing. This is the latest in a series of ups and downs for a stock that sold for over $70 per share in 2015. With the stock having lost more than 90% of its value, investors will have to determine whether the company can remake itself or whether they should pass on this venerable retailer.

Uncertainty on the rise amid a pandemic

Macy's also withdrew its guidance when management cut the dividend. However, the economic slowdown caused by the coronavirus has led numerous companies both inside and outside of retail to take the same step. Understandably, few companies want to try to predict revenue and earnings with such a high level of uncertainty. While e-commerce remains in operation, the fact that Macy's and most other peers have to close their stores makes the near future that much more difficult to forecast.

The part of this more unique to Macy's, and recently Nordstrom, is the dividend suspension. Investors probably should have at least expected a reduced payout. The dividend, which previously paid shareholders $1.51 per share annually, had risen to yield over 25%. This seems out of place in an environment where the average S&P 500 payout comes in at around 2.2%. 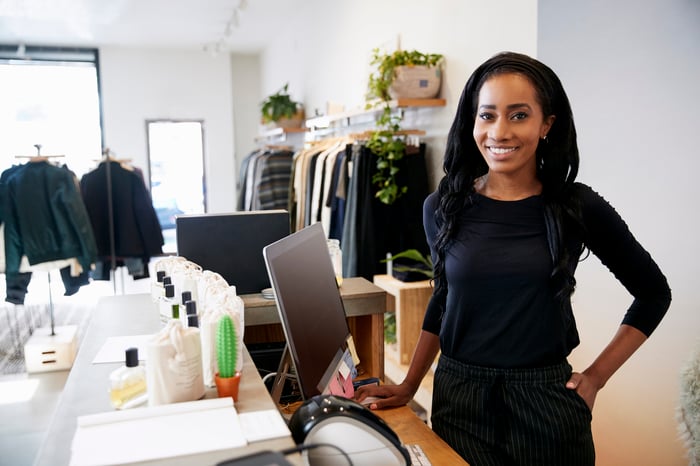 Still, the push toward e-commerce led by Amazon and other companies changes the face of retail. And longtime rivals such as Sears have already declared bankruptcy, and J.C. Penney may soon have to take that step as well.

Seasoned investors will understand that the stock's decline of more than 90% does not mean shares have become "cheap." The real question for investors hinges on whether the department store chain, which has existed since 1858, can find a place in today's retail environment.

For example, the company has seen some successes with Macy's Backstage, an off-price concept. This allows the company to compete for more customers by selling different types of merchandise under the Macy's banner.

The mainstream Macy's stores have also embraced some new concepts. Before the pandemic, it had instituted a plan to close 125 mall-based locations and move toward "off-mall" sites. It has one of these stores, called Market by Macy's, in Southlake, Texas. The company hopes that this neighborhood concept can help build a more direct relationship with its customer base.

Macy's has also explored technology-based solutions. Success with Alphabet's Google Cloud platform helped to improve inventory mix at the off-price stores. Macy's subsequently expanded the use of this platform to other parts of the company. Also, continued investments in its online store and app have bolstered the omnichannel strategy. Features such as convenient in-store pick-up and localized recommendations can potentially drive online purchases and store traffic.

Does Macy's have a path forward?

Unfortunately, despite these initiatives, profits continue to decline. The company remained profitable before COVID-19, earning $1.81 per share in fiscal 2019. However, this is barely half what the company earned in the prior year. With widespread store closures that could last months, investors will have to wait to find out whether Macy's can pick up where it left off when business conditions return to normal.

Still, the company appears to have some time. For now, the company operates about 775 stores, leaving management with a substantial footprint with which they can remake the business. The balance sheet had $4.2 billion of debt as of February, but management is shoring up its cash position by drawing down on its credit facility, not to mention the $466 million of dividend payments that won't be going out this year.

Macy's stock has become a gamble as to whether the company can actually find a way to draw customers back to its stores in today's retail environment. Given its trajectory over the past five years in an industry that's only getting more competitive, the window for recovery is growing narrower by the day, and this pandemic has thrown yet another wrench into the company's plans.

How lucky do you feel?