Please ensure Javascript is enabled for purposes of website accessibility
Log In Help Join The Motley Fool
Free Article Join Over 1 Million Premium Members And Get More In-Depth Stock Guidance and Research
By James Brumley - Mar 14, 2020 at 11:15AM

The company's small, off-mall concept is cool, but it's the opposite of what it's spent decades trying to become.

Struggling department store chain Macy's (M 1.72%) is experimenting with a revolutionary idea that could bring the company into the modern era of consumerism. But the new "Market by Macy's" concept may be too little, too late. The time to implement such measures was years ago, with a far greater scope than just one store opening at a time.

That's the pessimistic case anyway. Macy's executives are obviously more optimistic, with CEO Jeff Gennette explaining that "Market by Macy's will play an important role in our off-mall expansion" announced in February. The company wants to shutter 125 mall-based stores but plans to open stores closer to where consumers live and work, and the "off-mall" locations where they increasingly shop. Market by Macy's does just that, selling locally minded merchandise while simultaneously bringing customers more lifestyle-oriented offerings like sit-down meals and alcoholic beverages.

It might work, or it might miss the mark. Mostly though, with only a handful of stores of this type reportedly planned to open this year, it might be too late to matter. 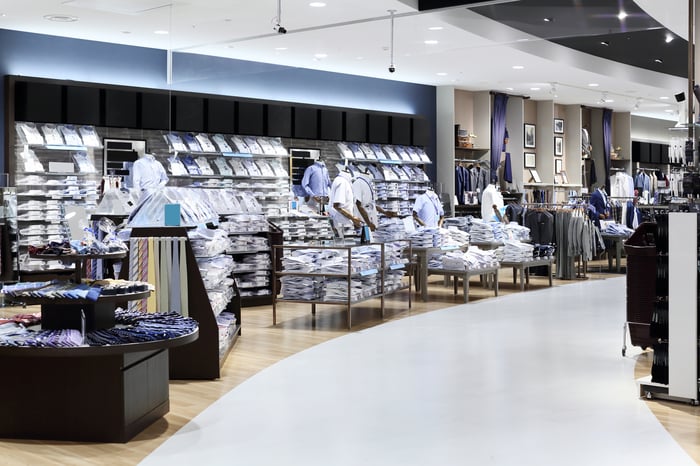 Market by Macy's is everything Macy's isn't

If the idea rings a bell, it may be because Nordstrom (JWN 0.70%) has already proven the concept works. The higher-end retailer has added amenities like foodservice, dry cleaning, beauty salons, and more at some locations, all designed to keep consumers engaged for longer periods of time. The tactic has worked where the department store chain has rolled out this proverbial red carpet too. These so-called "Local" stores that are more about service and less about the sheer quantity of inventory induce ticket sizes more than twice the size of Nordstrom's norm.

Macy's isn't Nordstrom though, and won't likely be a threat to Nordstrom's strategy for a while -- if it ever is -- for a handful of different reasons.

One of those reasons is that there's only one Market by Macy's location up and running right now, in Southlake, Texas. The company confirmed it would open Market by Macy's stores in Fort Worth this year, as well as Atlanta and Washington, D.C. It didn't say how many would be opened in each city, though only one in each locale seems a likely start. For perspective, despite a string of store closures in recent years, Macy's still operates more than 800 conventional department stores.

Perhaps the biggest potential pitfall of redefining the kind of retailer Macy's is, however, is the sheer depth of operational change Market by Macy's would mean for the company if the Southlake store is the new prototype.

The one and only Market by Macy's location is a 20,000-square-foot shopping space, or roughly 1/10th of the average-sized store within the Macy's network. That limits the selection these stores can show shoppers, and that inventory is further limited by space allocated for food service. The retailer must ensure it's carrying the most marketable goods in these stores, but also must understand that consumers may visit a store mostly to buy basics such as socks and underwear, and then pick up a pair of jeans or shoes once in the building.

The Southlake store also offers items curated from local suppliers as well as select direct-to-consumer brands. The approach is meant to add intimacy, and it arguably does so. Localized buying is also labor-intensive though, requiring awareness of the local market that remote buyers may not be able to achieve without help from local store personnel. That personnel, however, may not have experience in procurement.

In the same vein, the small-format premise is likely to require close care from store associates who may not even be familiar with the sort of customer service stores used to be able to give.

Whereas malls and stores have been beneficiaries of foot traffic driven by the sheer quantity of shopping options available to consumers, Market by Macy's has yet to prove itself as a customer draw in and of itself. Its size and offerings are more akin to smaller mall stores that rely on so-called anchor stores to lure consumers to the destination. That means in-store personnel will have to work at cultivating relationships with local customers that they may not have had built before.

Better than nothing, but...

It's not a criticism. While the smaller, off-mall format may not yet be proven as a Macy's initiative, clearly the company can't continue on as is. Macy's may have topped last quarter's earnings expectations, but on a year-over-year basis, revenue, earnings, and same-store sales all fell during the busiest shopping time of the year. The numbers extended a long-standing streak of deteriorating results.

If Market by Macy's is what Gennette has in mind for most of the company's shift away from malls and into neighborhoods, though, it doesn't look like it's going to be enough. It just looks like a 180-degree turnaround from the scale department store chains have been working for years to achieve. This small-shop format tends to be more successful when personally owned and locally operated, like New York's Century 21, and Kansas City's Halls ... which also sells food and drinks.