There are two other factors critical to the retailer's success, however, that must be considered in the discussion. One of them is a simple stroke of luck that happened to start falling into place years ago. That is, Nordstrom does very well with more affluent young adults who are more likely to respond to the chain's current strategies. The other is a more deliberate development -- the company has fully embraced the idea of retailing as entertainment.

Less inventory headed into the end of October ultimately meant fewer markdowns for the three-month stretch in question. Subsequently, the third quarter's per-share earnings jumped to $0.81, up 108% year over year, despite a slight revenue decline. And all of it was helped by the outperformance of its e-commerce business, notes Boss. A little more than one-third of sales now originate online, a figure that likely has most other apparel retailers envious, particularly given that 75% of its shoppers who pick up an online order in store end up buying something else during that trip. 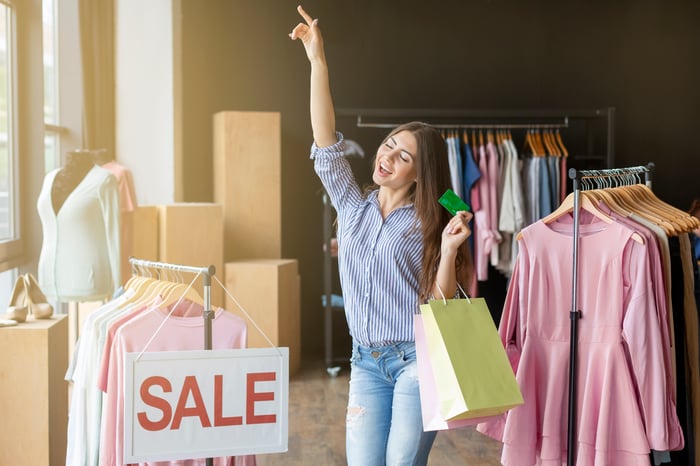 Nordstrom deserves plenty of credit for holding up in the face of the so-called retail apocalypse, while it orchestrated the turnaround.

It certainly wasn't always easy or pretty. Though revenue peaked early last year, profits started to wane as early as 2015. The  Nordstrom family even attempted to take the company private in 2018 -- as a means of escaping the headache of short-term investor scrutiny that often just proves distracting --  but wasn't able to make an offer the Board of Directors found acceptable. A revitalization then became the only real option, but the organization has managed to make it work at a time it arguably shouldn't have. The Seattle-based department store chain had some serendipitous help along the way, though. Namely, the company does extremely well with younger shoppers. Data from Viant indicates 51% of its shoppers are between the ages of 18 and 34. For perspective, only 37% of Macy's shoppers are in that age bracket. Kohl's is even less compelling to young adults, with a mere 31% of its foot traffic from that demographic. Don't let their age fool you, though. A little more than 40% of Nordstrom's regulars earn a six-figure income, versus 35% for Macy's and 29% for Kohl's.

In other words, more of Nordstrom's shoppers are likely to be more responsive to the company's online offerings, by virtue of their (collectively) younger age and affinity for technology. Its customers also boast greater discretionary spending capacity than its rivals' regulars.

The demographic data may be a function of store placement as much as it is a reflection of how the company promotes itself. Almost all of its stores are found at class-A malls, as Boss acknowledges, which have been largely immune to the retail apocalypse. These malls tend to be found in the most affluent ZIP codes, where brick-and-mortar shopping hasn't lost its luster.

Whatever the reason, it works to the company's advantage.

Not just selling, but dazzling

Nordstrom has also taken the idea of amenities and service to the next proverbial level, and as a result, the company has reaped clear rewards.

It's admittedly more of a prototype than the typical store experience, but the food, beverages, beauty salons, dry cleaning, Botox treatments, fashion collaborations, and other value-added offerings available at Nordstrom's New York flagship reflect the sort of shift now taking place at the company's other locations. Dubbed Nordstrom Local, the new brick-and-mortar strategy involves a network of smaller locations all working together in a way that gets -- and keeps --customers in stores longer.

The strategy is working, too. As fellow Fool Pearl Wang explained in November, shoppers at "Local" stores spend 2.5 times more than the average shopper does. JP Morgan's Boss called it a "game changer" in an industry that needs several. Other department store chains are trying similar tactics, though none seem to be executing the idea as well as Nordstrom has.

The department store chain intends to put these overhauls in place primarily in its top ten markets, although those markets make up about 60% of the organization's total sales.

The future is ... a little brighter

The Nordstrom upgrade is a glimmer of hope in a sea of retailing trouble. Store closures reached a record pace of 9,300 in 2019, and retail bankruptcies were once again daunting. Even Nordstrom's upgrade was ultimately tainted by the fact that JP Morgan still only rates it at neutral.

It's a standout all the same though, as it makes it clear that it's possible to do well in a seemingly lousy retailing environment. Continued store closures and retail bankruptcies, in fact, will only help Nordstrom as displaced shoppers look for new places to spend. The department store chain has clearly figured out how to draw a crowd and serve them effectively.

Investors could certainly do a lot worse.