As shopping malls around the country are putting up more vacancy signs, mall operators are quick to point out that not everyone is going down with the ship. "Class A" malls are purported to be the industry's sole bright spot, malls where foot traffic is relatively steady, justifying higher-than-average rents thanks to lower vacancies and higher-end tenants.

But as with any label, definitions vary. Mall owners eager to differentiate themselves from a sea of dead or dying malls are throwing around the Class A label as if it were a cut-and-dried adjective, not a subjective measure of a mall's position in the marketplace.

So what's a Class A mall, anyway?

While it depends on who you ask, a mall's "class" is generally a function of its smaller tenants' sales per square foot. Malls look at sales at stores that are less than 10,000 square feet in size, dividing their collective sales by the amount of space they take up. If a mall store generates $3 million of annual sales in a 5,000-square-foot space, that's $600 of sales per square foot. 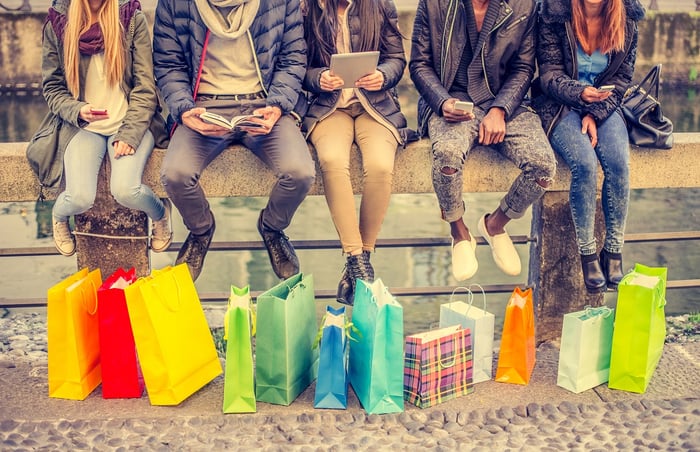 Sales at smaller stores (known as "in-line stores") are a better barometer of a mall's true health than the overall average. Whereas a 200,000-square-foot Macy's store brings traffic to a mall, a 3,000-square-foot candy shop does not. The candy shop relies on passersby to survive. Thus, sales per square foot at in-line stores offer a glimpse into whether a mall is attracting enough shoppers to satisfy its most important tenants: On a square-foot basis, in-line stores often pay far more than anchor stores.

With data on sales per square foot in hand, a mall can be divided into "classes" ranging from A to C, though some go so far to split the last designation into C and D:

Any way you slice it, however, Class C malls are generally on the brink, as they have notable numbers of vacancies and attract lower-quality tenants than A or B malls.

Beyond the quantitative factors, qualitative ones can also help in assigning a Class A designation to a mall. Unlike most in-line stores, Apple (NASDAQ:AAPL) Stores draw customers to a mall or shopping center, so Apple's stores are commonly cited as a "tell" that a property is truly Class A. But with fewer than 300 Apple Stores across the United States, few malls are lucky enough to have the company as a tenant.

Who owns the most malls?

Real estate investors that own malls tend to concentrate in the asset class. General Growth Properties (NYSE:GGP) is often heralded as the Class A mall REIT (real estate investment trust). The company noted in its 2017 investor presentation that its top 100 properties generated $582 in retail sales per square foot, and 96% of the company's net operating income. On average, its consolidated retail properties generated $499 of sales per square foot in 2017.

On the opposite end of the spectrum, CBL and Associates Properties (OTC:CBL) is more of a Class B and Class C operator. The company said same-center sales per square foot stood at $372 in 2017. In a telling sign of just how dire things are at CBL and Associates, investors have priced it as though they expect it to go to zero. Shares currently yield about 17%, assuming, of course, that the company can maintain its dividend in light of declining occupancy and tenant sales. Bondholders don't appear too confident, either; the company's debt sports a yield in excess of 8%, since it trades for $0.86 on the dollar.

Of course, what's Class A today may not be Class A tomorrow. Malls survive on simple network effects. When a big department store moves out, a mall loses the foot traffic it needs to justify high rents from the in-line stores that generate the bulk of its rental revenue. Furthermore, in-line stores frequently have "tenancy clauses" in their leases, requiring the landlord to reduce rents if a certain anchor store moves out or if a certain number of slots are vacant, so losing an anchor tenant can kick off a downward financial spiral for the property owner.

The scariest thing about the decline in malls is that no one knows just how far we'll fall before things level out. To be sure, the most luxurious of shopping malls have seen only modest declines. The real problem is on the lower end, where B and C malls are losing anchor stores and filling in-line vacancies with nontraditional tenants.

The sports-bar-and-arcade combination known as Dave & Buster's (NASDAQ:PLAY) plans to open 14 new stores this year, many of them in spaces left vacant by malls' departing anchor tenants. Dave & Buster's said in its annual report that its customers live in households with average annual incomes over $75,000 -- the kind of visitors that malls want badly.

Likewise, Ulta Beauty (NASDAQ:ULTA), a cosmetics retailer, is also expanding by opening stores in vacant slots in malls and shopping centers. Amusingly, Ulta will soon open a new location in Louisville, Kentucky, where it will take up space formerly occupied by Forever 21, and sit below Dave & Buster's, which took the floor above.

Ultimately, the problem is simply too much supply and too little demand. Retailers that draw people to malls -- department stores -- are shuttering stores left and right, and concentrating on their stores in real Class A properties. That leaves the B and C malls to survive, for now, on the scraps.

What Is a Class A Mall? @themotleyfool #stocks $GGP $CBL $AAPL $ULTA $PLAY Next Article
Current