Please ensure Javascript is enabled for purposes of website accessibility
Log In Help Join The Motley Fool
Free Article Join Over 1 Million Premium Members And Get More In-Depth Stock Guidance and Research
By Scott Levine - Mar 26, 2020 at 8:04AM

Retail locations and restaurants aren't the only businesses shutting their doors due to the outbreak of the novel coronavirus.

In times of financial and political uncertainty, the conventional wisdom is that investors will run toward safe-haven investments like gold. But during these unprecedented times, investors aren't finding any comfort in the yellow stuff.

While the S&P 500 has plunged 32% over the past month, the price of gold has fallen about 8%. Similarly, the stocks of gold miners seem to be falling out of favor with investors. Newmont Corporation (NEM 2.51%), for example, has plummeted nearly 14% over the past month.

Presumably, the circumstances surrounding the drop in Newmont's stock can be attributed to investors' uncertainty regarding how the COVID-19 outbreak will affect the mining company's operations. On Monday, though, shareholders gained some insight as the company announced that it was withdrawing its 2020 mineral production forecast while suspending operations at several mines. 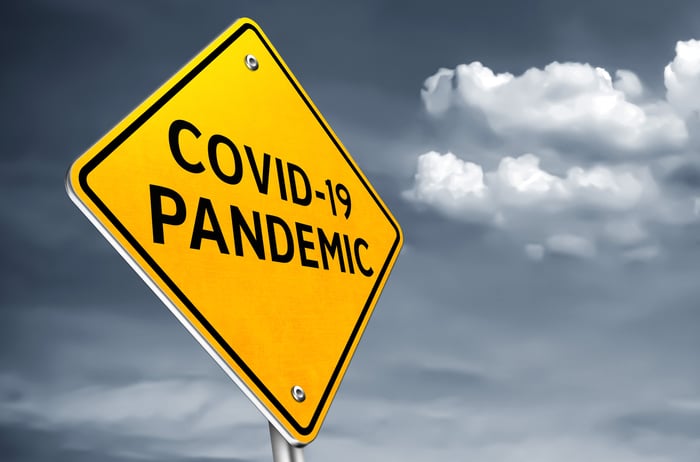 Producing 6.3 million ounces of gold in 2019, Newmont had led investors to believe that this year would glitter more brightly; management had forecast 2020 gold production of 6.4 million ounces.

With the company withdrawing guidance, however, investors have little sense of what 2020 has in store in terms of the amount of yellow stuff the company will produce. Unwilling to provide a specific figure, Newmont announced that it estimates gold production, which had been 981,000 ounces as of Feb. 29, for the first quarter of 2020 will total 1.4 million ounces.

According to the Newmont's press release, the company's mines that account for about 80% of its production outlook for 2020 continue to operate in line with production targets for the year. Four of the company's mines, however, have suspended operations and are now operating on care and maintenance: Musselwhite, Eleonore, Cerro Negro, and Yanacocha.

Speaking to the halting of operations at these assets, Tom Palmer, the company's president and CEO, said that Newmont is "making sure that these short-term disruptions do not impact long-term business value while ensuring we are well-positioned to safely and efficiently ramp-up operations in a timely manner once the worst of this global pandemic passes."

Putting a halt to operations comes at what cost?

While investors have some sense on how the COVID-19 outbreak is affecting the company's mineral production, it's less clear what the impact will be regarding costs. According to its initial guidance, management forecast all-in sustaining costs (AISC) of $975 per gold ounce for 2020; however, the company indicated that costs could be affected "if some operations are on care and maintenance for an extended period."

Besides the costs, in and of themselves, of having these assets on care and maintenance, the fact that they are not producing gold could lead to Newmont generating a slimmer gold margin in 2020. Based on guidance issued in January, Eleonore, located in Quebec, was expected to achieve gold production of 355,000 ounces in 2020, or 21% of the company's production from its North American assets, and it was expected to report AISC of $915 per gold ounce -- the second-lowest expected AISC level next to Penasquito, which is expected to incur AISC of $725 per gold ounce for 2020.

Similarly, should Cerro Negro remain on care and maintenance for a lengthy amount of time, it could also cut into the company's gold margin. In 2020, for example, Cerro Negro had originally been forecast to produce 405,000 gold ounces at AISC of $710 per gold ounce.

Although the placement of four assets on care and maintenance may result in Newmont glittering less brightly in 2020 than it had originally hoped, shareholders shouldn't fret that the company is facing financial ruin. At the end of 2019, Newmont had $2.2 billion in cash on its balance sheet. In addition, the company made a concerted effort in 2019 to shore up its balance sheet by paying down and refinancing $1.2 billion and $600 million in debt, respectively.

Consequently, Newmont ended 2020 with a net debt-to-EBITDA ratio of 0.66, indicating that the company's conservative approach to leverage should reassure investors that the company's financial health is secure. And if the outbreak continues to compromise the company's operations, Newmont has $5 billion in available liquidity to help the company withstand the effects of the pandemic.

What concerned investors should continue to watch

Despite Newmont's withdrawal of its 2020 guidance and decision to place four of its assets on care and maintenance, its strong balance sheet should indicate to investors that management's sound financial planning in 2019 has positioned the company well to withstand the uncertainty which lies ahead of it due to the COVID-19 pandemic.

Most likely, investors can expect other assets to be placed on care and maintenance as efforts continue to be made to stem the spread of the novel coronavirus. Nonetheless, those investors with a longtime horizon should feel reassured that this global leader in the gold mining industry is well-positioned to face any headwinds.