Target's guidance withdrawal has scared off Amazon and Walmart investors. Should it?

Target (TGT 4.57%) detailed the consumer response to the spread of coronavirus when it announced the withdrawal of its first quarter guidance. Sales are soaring. For the month of March, comparable store sales have climbed 20%, well above the 3.8% the company saw in February.

The challenge for Target, and likely other retail giants like Walmart (WMT 5.11%) and Amazon (AMZN 1.12%), is that growth is coming from low-margin grocery sales. Target says sales in the Essentials and Food & Beverage categories surged 50% compared to last March, but Apparel & Accessories sales are down 20%. As a result, management sees potential for "lower-than-expected gross margin dollar performance" going forward.

Meanwhile, Target is taking steps to mitigate the spread and effect of coronavirus, including increased pay and benefits for its workers. Management estimates it'll cost an extra $300 million in the first quarter, which started in February. Combined with lower gross margin performance, the increased operating expenses could drag down profits despite the surging sales. Walmart and Amazon could see similar challenges. 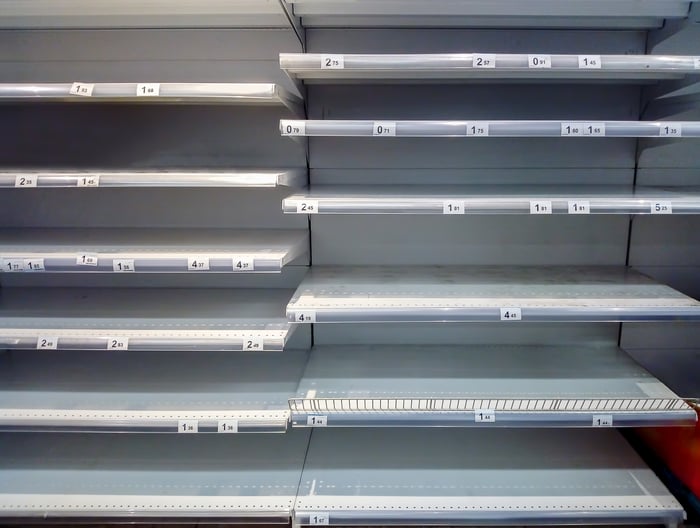 Gross margin pressure is something both Amazon and Walmart will experience in the wake of coronavirus as well.

Earlier this month, Amazon instituted a new policy to stock its warehouses with essential items only -- household staples, groceries, and medical supplies. Wait times for non-essential items have been pushed out as much as 30 days for some Prime members. Meanwhile, Walmart's shelves in the grocery section are constantly in need of restocking, while the more discretionary item sides of its Supercenters are practically empty of shoppers.

Both companies should see sales mixes shift similarly to Target's. That said, there are mitigating factors for Walmart. First of all, the company already derives a huge percentage of sales from grocery -- over half, to be sure, and pushing closer to 60%. As a result, the gross margin effect on Walmart might not be as strong as it is on Target, where grocery sales typically make up a much smaller percentage of sales.

Mitigating the overall effect on Amazon's business, however, is the company's cloud computing division, Amazon Web Services, which has likely seen strong demand and produces around two-thirds of the company's total operating income.

As such, both of Target's bigger rivals should see a smaller effect of the shifting consumer trends on their gross dollar growth.

Both Walmart and Amazon are on hiring sprees to try to keep up with shopper demand. Amazon's looking for 100,000 additional warehouse and delivery workers, and Walmart needs 150,000 workers for its stores and distribution and fulfillment centers. Target has notably only increased hiring for Shipt, its same-day delivery service, and by fewer than 10,000 at that.

Meanwhile, Amazon and Walmart are increasing pay to their workers by $2 per hour. Walmart is also giving one-time bonuses to both full-time and part-time employees for $300 and $150, respectively. Walmart and Amazon say the increased pay will amount to $550 million and $350 million, respectively, over approximately two and a half months.

While those increases are more than Target's on an absolute basis, as a percentage of quarterly operating income, it's not nearly as big of a hit for Walmart or Target. Target's operating income in the first quarter last year was just $1.1 billion. $300 million represents over 25%.

As a result, Walmart and Amazon should absorb the increase in pay and other operating expenses much better than Target due to their scale. Combined with a smaller effect on gross margin, both Amazon and Walmart should be able to navigate the challenges presented by coronavirus to the retail industry much better than Target.