Please ensure Javascript is enabled for purposes of website accessibility
Log In Help Join The Motley Fool
Free Article Join Over 1 Million Premium Members And Get More In-Depth Stock Guidance and Research
By Rich Duprey - Mar 27, 2020 at 8:39AM

Prices tripled within a matter of weeks, exceeding the levels hit during the avian flu outbreak five years ago.

The coronavirus pandemic has sent egg prices soaring. The cost of a dozen eggs now exceeds the prices hit during the avian flu crisis in 2015 when the outbreak led to the slaughter of over 40 million birds, or some 12% of the national laying flock.

While panic buying has mostly focused on hand sanitizer or toilet paper, consumers have been also clearing store shelves of eggs, a cheap source of protein, causing prices to triple within a matter of weeks. 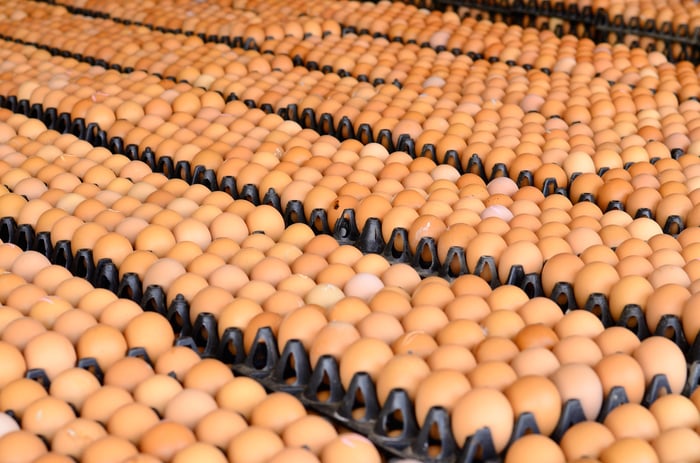 The price of "Midwest large" eggs hit $3.09 per dozen according to the industry's Urner Barry price index, three times higher than the $1.03 per dozen price they sold for at the beginning of the month, and almost 400% higher than where prices stood at the end of January.

Cal-Maine Foods (CALM 2.06%) is the country's largest egg producer, selling over 1 billion dozen eggs in 2019, which represents 19% of all shell eggs produced.

When it reported fiscal second-quarter earnings in the beginning of January, it was suffering from the traditional seasonal decline in prices as sales fell 12.5% though volumes remained flat. It recorded a loss of $10 million for the period.

At the time, there was an oversupply of eggs as hen flocks had grown by 4.6 million to 340.5 million hens. But now, Urner Barry director Brian Moscogiuri told Reuters, "suppliers are seeing four, five, six times the level of demand as before," leading to the current jump in prices.

Egg prices during the avian flu outbreak peaked at just under $3 per dozen.