Profitable. Great revenue and earnings growth. Strong market potential. These stocks check off all the boxes.

Let me admit right off the bat that I won't reveal all of my top healthcare stocks to buy in the market crash in this article. It's not that I'm trying to be evasive. The problem is that there are so many healthcare stocks that I like right now that I couldn't fit them all in.

To narrow down the list, I'm going to leave out all of the stocks of companies that aren't consistently profitable yet. Even with this culling of the herd, there are still too many great healthcare stocks to include. But if I had to pick my most favorite stocks of all in the healthcare sector to buy right now, here are the three at the tippy top of my list (in alphabetical order). 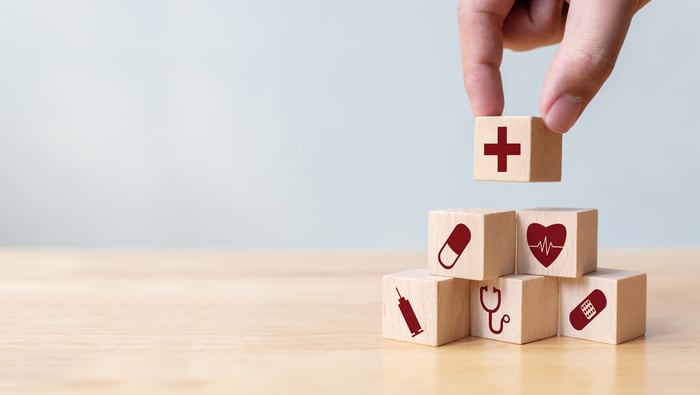 Bristol Myers Squibb (BMY -0.13%) is a different company than it was just a few months ago. The acquisition of Celgene in November 2019 has not only made BMS bigger, but it's also transformed the drugmaker's growth prospects.

To be sure, BMS already had several great growth drivers. Sales continue to soar for blood-thinning drug Eliquis. The momentum has slowed for cancer immunotherapy Opdivo, but I expect a solid uptick as it picks up regulatory approvals for additional indications. I also like the prospects for multiple myeloma drug Empliciti and autoimmune disease drug Orencia.

However, the Celgene buyout has added several blockbusters with growing sales to the fold for BMS. There's blood cancer behemoth Revlimid. Multiple myeloma drug Pomalyst and solid tumor drug Abraxane are enjoying especially strong momentum. And more blockbusters are likely on the way. BMS announced FDA approval for multiple sclerosis drug Zeposia last week and could win approvals for cancer cell therapies ide-cel and liso-cel over the next couple of years.

In addition to its strong growth prospects, Bristol Myers Squibb offers a really attractive dividend. Its dividend yield currently stands at more than 3.6%. The company has also increased its dividend every year for the last decade.

The coronavirus pandemic has caused many hospitals to delay elective surgeries. This is likely to weigh somewhat on Intuitive Surgical's (ISRG 2.13%) revenue in the short term since some of the procedures for which its da Vinci robotic surgical systems are used are elective. But this doesn't worry me one bit.

Intuitive should remain highly profitable even with a temporary headwind. The company has a huge cash stockpile that it could tap into even if the pandemic causes procedures to be pushed back longer than expected. And many of the procedures for which da Vinci is used, notably including prostatectomies, aren't typically elective surgeries.

More importantly, Intuitive Surgical's long-term growth prospects still look very good. The populations of senior citizens in the U.S. and other major developed countries are growing. This aging trend will likely drive increased demand for many of the types of procedures that are optimal for robotic surgical assistance. Technological innovation should also expand the types of procedures that can be performed with surgical robots.

Intuitive will face more competition soon. Again, though, this isn't a big concern in my view. I think that the robotic surgical systems market will expand as more companies jump in. With Intuitive Surgical's large global customer base and extensive track record, I fully expect the company will remain the leader -- but with even greater opportunities than in the past.

When times are tough, it's good to be a virtual monopoly in a niche that will have sustained demand regardless of what happens. And that's what Vertex Pharmaceuticals (VRTX -1.02%) is in the cystic fibrosis (CF) market. There are only four drugs on the market in the U.S. that treat the underlying cause of the rare genetic disease. All four belong to Vertex.

I'm especially excited about the prospects for Vertex's most recent CF drug to win FDA approval, Trikafta. The company awaits European approval for the drug, which seems like as close to a slam dunk as regulatory approvals come (although there's always some level of risk). Assuming that Trikafta is approved in Europe, Vertex's addressable patient population will increase by more than 50%.

In the meantime, Vertex scored some big reimbursement deals for its other three CF drugs in key markets over the last few months. These wins will boost the company's international sales while Trikafta turbocharges sales in the U.S.

Vertex's pipeline includes mainly early stage candidates, but they have a lot of potential. The company is evaluating several experimental drugs targeting rare genetic diseases other than CF. Vertex also hopes to advance a potential cure for type 1 diabetes into clinical testing in the not-too-distant future. There are several biotech stocks that I think are great picks, but my view is that Vertex is the best in class.