Please ensure Javascript is enabled for purposes of website accessibility
Log In Help Join The Motley Fool
Free Article Join Over 1 Million Premium Members And Get More In-Depth Stock Guidance and Research
By Jeremy Bowman - Mar 30, 2020 at 8:15AM

Disney will one day rival Netflix in streaming. The market doesn't seem to care.

It wasn't the first time that had happened, as Netflix briefly topped Disney in valuation in 2018 when the leading streamer's stock hit an all-time high, but Disney's changed significantly since then.

Most importantly, Disney has built a streaming arsenal to rival Netflix, as it's launched both Disney+ and ESPN+, and acquired two-thirds ownership of Hulu with its acquisition of Fox last year. A deal with Comcast (CMCSA 1.13%), which owns the other third of Hulu, gave Disney full operational control of the streaming service, best known for its network TV programming. Additionally, Hotstar, the Indian entertainment service offering both broadcast and streaming connectivity that Disney acquired through Fox, now has 300 million monthly active users.

Disney's push into streaming hardly seems like a factor in the company's valuation today. Indeed, the stock has been hammered by the coronavirus pandemic. The outbreak has forced it to close its parks, dock its cruise ships, and suspend production of live-action film and television, and has left ESPN devoid of live sports. That sell-off has created a buying opportunity, but it also prompts questions about what a fair valuation for the streaming business would be, as investors seem to be ignoring it. Let's take a closer look. 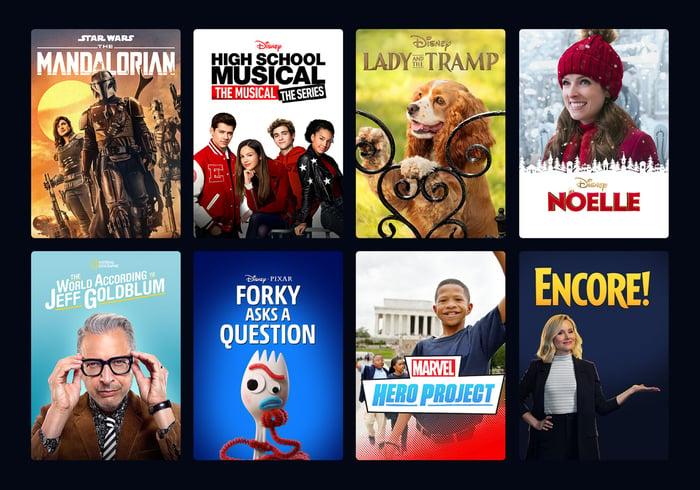 Disney's most recent quarterly numbers show how fast its streaming business could grow. Just a month-and-half since its launch, Disney+ had attracted 26.5 million members, and that number had increased to 28.6 million by February 4. ESPN+ sign-ups, meanwhile, jumped from 1.4 million the year before to 6.6 million, and Hulu subscribers rose 33% 30.4 million. Combined, its three streaming services have more than 60 million subscribers, and nearly all of them are in the U.S. By comparison, Netflix had 61 million U.S. streaming subscribers in its most recent quarter.

Disney's streaming services have a number of outlets for growth. First, international markets present a rich opportunity, as Disney the brand is well known around the world. Disney+ just launched in seven countries in Europe on March 24, garnering 5 million app downloads on its first day, a sign of heavy demand for the service, especially as much of the continent is locked down due to the coronavirus outbreak. In India, the company was forced to postpone Disney+'s debut, but the service should be attractive when it does launch, as it will carry the highly popular cricket league Indian Premier League.

The company also plans to launch Hulu internationally. The service has been something of an underperformer in streaming, as it was run as a joint venture for much of its history and mostly ignored by its owners. With a popular slate of American television, there's little reason why Hulu couldn't find an audience abroad as Netflix and other services like Amazon have.

Finally, ESPN+ has the potential to grow much faster if the company loads it with the kind of major sports content that's popular on the flagship cable network, but the company is reluctant to disrupt its cable cash cow thus far.

Disney's streaming service clearly isn't as big as Netflix's yet, but it could get there in just a few years. When it launched Disney+, the company said its goal was to have 60 million to 90 million members by 2024, the same year it expected it to turn a profit. However, the company looks set to reach that membership goal much sooner. Disney+ already had nearly 30 million subscribers by the beginning of February, and with the European launch, which seems to have added at least 5 million members, and the effects of the coronavirus outbreak, Disney+ could very well already have 40 million members, and the service still has yet to reach Asia or Latin America.

Similarly, if Hulu is able to follow in the footsteps of Netflix, it should eventually have more international subscribers than it does domestically, and its ability to be bundled with Disney+ should help fuel its growth.

Disney+ is also notably cheaper than Netflix at a list price of $6.99/month, and Disney also offers its three streaming service together at the same bundled price as the standard Netflix package, $12.99. Disney's streaming business is going to be unprofitable for the foreseeable future, while Netflix is profitable on an accrual basis, though its cash flow is still negative.

Given the potential of its streaming services, the fact that Disney as a whole is worth only a little more than Netflix seems like a mistake. Disney will likely have a streaming business with the reach and revenue stream of Netflix in just a few years, and its other businesses, including media networks, theme parks, and box office releases are all leaders in their respective industries, and generate billions in profits.

Disney's streaming services may never get a Netflix-like valuation, but they'll be powering the company's growth for years to come and strengthening Disney's product ecosystem and the competitive advantages of its flywheel model.