The laptop market is about to get more competitive, and Microsoft expands its consumer subscription bundle.

The Dow Jones Industrial Average (^DJI 0.58%) was volatile on Tuesday, opening lower, then rallying, then falling back into negative territory. At 1:20 p.m. EDT, the Dow was down about 0.95%.

This volatility comes as the novel coronavirus pandemic spreads rapidly throughout the United States. There are now over 175,000 confirmed U.S. cases, according to Johns Hopkins University, and more than 3,400 confirmed deaths.

Shares of Intel (INTC -1.28%) and Microsoft (MSFT 1.34%) were both down a bit on Tuesday, although the weak market may have been mostly to blame. Intel is facing almost unprecedented competition in the laptop market from its main rival, and Microsoft announced plans for a broader subscription bundle aimed at consumers.

Sales of laptops were up 10% during the first two weeks of March, according to NPD, driven by the shift to working from home made necessary by the novel coronavirus pandemic. That's good news for Intel in the short term. The company's chips were found in nearly 84% of laptops shipped in the fourth quarter of last year, making it the market leader by a wide margin. 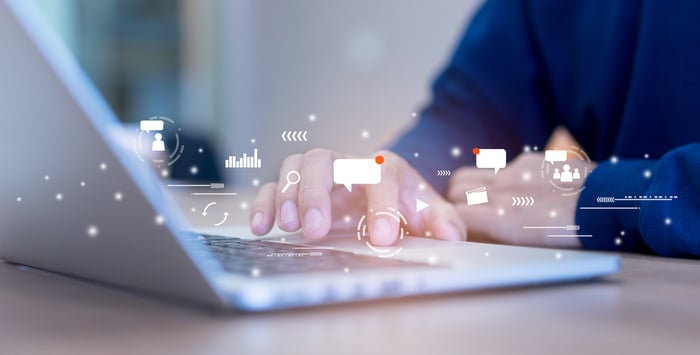 This initial surge in demand will fade, and demand for laptops may even plummet as the U.S. economy contracts in the coming months. The biggest problem for Intel, though, is rival Advanced Micro Devices (AMD -3.39%). Laptops built around AMD's new Ryzen 4000 Mobile chips, announced in January, are starting to trickle into retailers. Intel should be worried.

One Ryzen 4000 laptop available today is the Asus ROG Zephyrus G14. This is a gaming laptop, featuring an 8-core Ryzen 4900HS processor and a discrete graphics chip from NVIDIA. In its review, Tom's Hardware called the Zephyrus "one of the best AMD-based laptops we've ever seen. On top of providing solid performance, the laptop beat out the competition in terms of battery life by a wide margin.

Lower-end Ryzen 4000 laptops will arrive in the coming months. Acer, for example, is planning Ryzen 4000 versions of its Swift 3 and Aspire 5 laptops, which will start at $629 and $519, respectively. While we'll have to wait for third-party reviews to draw any conclusions, these devices will likely be competitive with comparable Intel offerings, and they may even blow Intel away in certain areas like battery life.

Intel stock was down 2.9% by early afternoon, although it's unclear whether the AMD laptop news had anything to do with the decline. Shares are now down about 22% from their 52-week high.

Microsoft has found success selling consumers on the idea of subscribing to its popular Office productivity suite. At the end of 2019, the company had 37.2 million subscribers to the consumer versions of Office 365.

On Monday, Microsoft announced that Office 365 would become Microsoft 365 on April 21. This new subscription bundle, priced the same as Office 365, includes Office apps with exclusive features, cloud storage, access to a consumer version of Microsoft Teams, and various other features and upgrades. Some features will be rolled out over the next few months.

One interesting feature that will become available soon for subscribers is Money in Excel. Powered by a partnership with Plaid, Money in Excel will allow users to connect Excel to their accounts at financial institutions and use the spreadsheet software to manage their finances.

Microsoft 365 is the tech giant's attempt to further ingrain itself in consumers' lives. With a low monthly price and plenty of useful features, the strategy just might work.

Shares of Microsoft were down about 0.4% by early afternoon. The stock is down roughly 16% from its 52-week high.