Advanced Micro Devices (NASDAQ:AMD) has successfully wrestled back some market share from Intel (NASDAQ:INTC) in the desktop CPU market. The company launched its third-generation Ryzen desktop chips in July, erasing Intel's performance advantage almost entirely. In combination with aggressive pricing, that has pushed up AMD's desktop CPU market share to levels not seen in many years.

Progress has been a bit slower for AMD in the laptop market, partly because winning market share there requires convincing OEMs to design systems around its chips. It has been gaining ground, though, and the company will likely continue that trend this year with its just-announced Ryzen 4000 mobile chips. 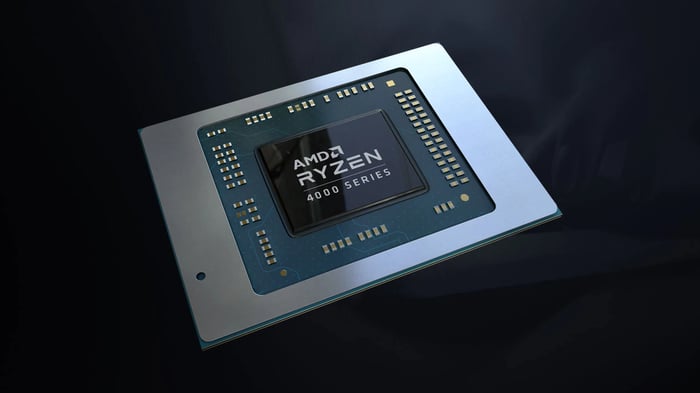 The upcoming Ryzen 4000 mobile chips are basically the laptop versions of the Ryzen 3000 desktop chips. They're based on the same Zen 2 architecture and use the same cutting-edge 7nm process. Because they're laptop chips, they'll include integrated graphics, based on AMD's Vega graphics architecture.

Ryzen 4000 mobile will be split between the low-power U series and the higher-power H series. The 15-watt U series chips start at four cores and four threads on the low end, and go to eight cores and 16 threads at the high end.

The H series chips, which have either six or eight cores depending on the model and use 45 watts of power, are designed for gaming laptops. They feature higher base frequencies than the U series, and deliver something closer to desktop-level performance.

For the 4800H, the highest-end H series chip, AMD claims a 5% single-threaded advantage and a 46% multi-threaded advantage over Intel's Core i7-9750H processor. The 4800H will also deliver 25% faster 4K video encoding and 39% better gameplay physics and simulation, according to AMD's tests.

The first Ryzen 4000 mobile devices will arrive in the first quarter, and more than 100 devices are set to hit the market this year.

Intel will respond with Tiger Lake

When the first Ryzen 4000 laptops launch, they'll be up against systems using Intel's latest Ice Lake mobile processors. But later in 2020, Intel plans to launch its Tiger Lake mobile chips, which will be built using the tech giant's 10nm+ process, and feature its new Xe graphics architecture. Intel is promising double-digit-percentage performance gains, as well as significantly improved graphics performance.

In the third quarter of 2019, AMD claimed a 14.7% unit share of the laptop market, according to Mercury Research. The company has had to convince laptop OEMs to build systems around its new chips, while also working to reverse the damage that years of lackluster pre-Ryzen products have inflicted on consumer perception of its brand.

Soon to be in its third generation, Ryzen Mobile is well-positioned to take a bigger chunk of the laptop market from Intel. Exactly how big depends on how aggressively Intel defends its turf, and how soon it can get its Tiger Lake chips to market. The Tiger Lake chips should deliver a great improvement in terms of graphics performance, an area where AMD has traditionally excelled.