Tuesday was a volatile day for stocks, with Middle East tensions weighing on the market. The Dow Jones Industrial Average (DJINDICES:^DJI) was down 0.39% at 12 p.m. EST.

Shares of Intel (NASDAQ:INTC) were down sharply after the chip company's latest product reveals failed to win over investors. Meanwhile Boeing (NYSE:BA) stock jumped as rumors that Warren Buffett was building a stake emerged.

Chip giant Intel is facing stiff competition from rival Advanced Micro Devices (NASDAQ:AMD). Through a combination of solid products from AMD and chronic delays of Intel's 10-nanometer manufacturing process, the CPU market is once again a two-horse race.

Intel had a chance to come out swinging at its keynote at CES 2020, but investors were clearly not impressed by what the company had to say. Intel stock was down 1.3%.

Intel showed off its upcoming Tiger Lake mobile processors, which will be built on its 10nm+ process. Tiger Lake is the successor to Ice Lake, and Intel expects Tiger Lake systems to start shipping sometime this year. 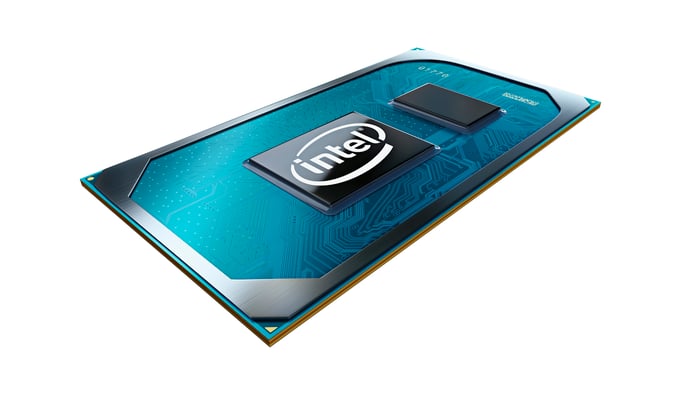 Tiger Lake will feature integrated graphics based on the company's new Xe graphics architecture. In addition to unveiling Tiger Lake, Intel previewed its first discrete graphics card based on Xe, code-named DG1. If Intel can launch a competitive graphics card, it could shake up the graphics card duopoly.

Intel stock may be hurting because AMD announced new mobile chips of its own at CES. AMD's Ryzen 4000 mobile processors bring the company's Zen 2 architecture and a 7 nm manufacturing process to laptops. The company touted a two-fold improvement in performance per watt for the lowest-power versions, as well as significant gains in graphics performance. The first Ryzen 4000 devices will be available in the first quarter, with more than 100 devices slated for release in 2020.

Intel still dominates the market for laptop chips, but AMD's market share has been on the rise. AMD's new Ryzen chips will put further pressure on Intel, so Tiger Lake will need to deliver later this year.

Shares of Boeing were up 2%, apparently due to rumors that Warren Buffett's Berkshire Hathaway (NYSE:BRK.B) was acquiring a stake in the company. Boeing would be right up Buffett's alley. It's an industrial behemoth operating in a duopoly, and long-term demand for commercial aircraft provides visibility years into the future.

But Boeing is also facing a major crisis. The 737 Max is still grounded following two fatal crashes, and the company will suspend production this month as the timeline for a return to service stretches out. Former Boeing CEO Dennis Muilenburg was fired over the ongoing debacle, and new problems with the plane keep cropping up.

Boeing stock has been in a holding pattern since early 2018. Shares are down around 23% from their multiyear high, but the stock really hasn't been punished all that harshly for the company's failings. The stock doesn't appear particularly cheap, but Berkshire is sitting on a ton of cash and seeing few opportunities to use it.

This is only a rumor, and it could turn out to be nothing more than noise. But it wouldn't be too surprising if Buffett decided to pull the trigger on Boeing.