An analyst sees less upside for Disney due to the pandemic, and Home Depot takes precautions at its stores.

A change in tone from President Trump regarding the coronavirus pandemic may have contributed to the stock market decline on Wednesday. Trump warned that the next two weeks will be painful, even with social distancing in effect. The Dow Jones Industrial Average (^DJI) was down 3.5% at 12:10 p.m. EDT today.

Johns Hopkins University now puts the total confirmed cases in the U.S. above 190,000, with more than 4,100 deaths. Both numbers will likely rise sharply over the next two weeks.

Shares of Disney (DIS -0.75%) and Home Depot (HD 0.19%) were down on Wednesday along with the overall market. Disney slumped after an analyst reduced his price target, while Home Depot trended lower after the retailer provided a business update.

Disney was flying high before the pandemic. The stock soared more than 30% in 2019, driven by a record year at the box office and the successful launch of the Disney+ streaming service. The parks, experiences, and products segment, Disney's largest, produced solid growth as well. 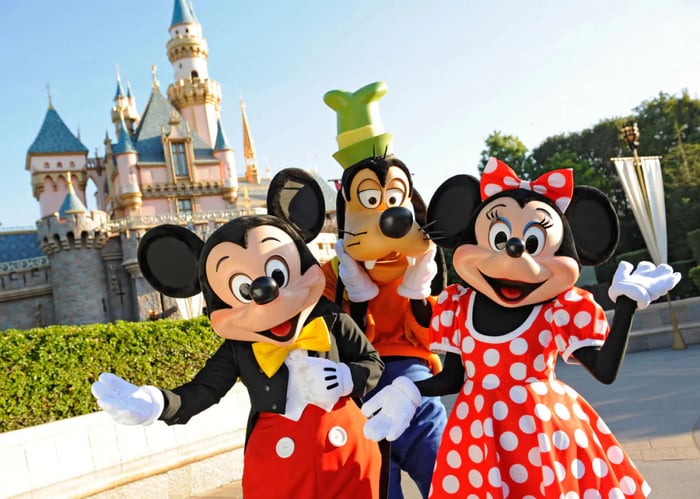 It's safe to say that 2020 is going to be a very different story. Disney has been forced to close its parks due to the pandemic; professional sports are on hiatus, dealing a heavy blow to ESPN; movie theaters are closed in many places, gutting Disney's movie business; and nonessential retail stores are shuttered, likely hurting sales of Disney-related merchandise.

On top of the short-term impact of the pandemic, the economic recession caused by the mass closings could stick around longer than the virus itself. With millions losing their jobs across the country, Disney may take quite awhile to fully recover.

Morgan Stanley analyst Benjamin Swinburne, while still bullish on Disney stock in the long run, cut his price target from $170 to $130 on Wednesday to reflect the impact of the pandemic and the recession on Disney's business. With shares trading around $96, the new price target still represents upside of about 35%.

One silver lining for Disney: Its Disney+ streaming service will likely flourish as people are forced to stay home due to the pandemic. Unfortunately, it won't be nearly enough to offset the pain. Disney stock was down about 2.3% by early afternoon today. Shares are down 37% from their 52-week high.

Home Depot adjusts to the pandemic

How home improvement retailer Home Depot performs during the pandemic and the resulting recession is up in the air. Stockpiling by consumers may have boosted sales of certain items in March, but a deep recession isn't going to do the blue chip retailer any favors.

Like many retailers, Home Depot is taking steps to reduce risks for customers and employees. The company announced Wednesday that it would begin closing stores early to allow more time for cleaning and restocking. Home Depot will also limit the number of customers allowed into the store, add markings and signage to promote social distancing, cancel its spring promotions to reduce traffic levels, and limit services and installations.

These steps will likely hurt its results, but they're necessary given the rapidly spreading virus. The big question: How quickly does the retailer recover once the pandemic is over? With job losses piling up, demand for things like major home improvement projects and appliance upgrades may be slow to rebound.

Home Depot stock had slumped about 3.7% by early afternoon. Shares are now down roughly 27% from their 52-week high.