Please ensure Javascript is enabled for purposes of website accessibility
Log In Help Join The Motley Fool
Free Article Join Over 1 Million Premium Members And Get More In-Depth Stock Guidance and Research
By Timothy Green - Mar 19, 2020 at 11:47AM

Disney+ could benefit from more people being home, and Microsoft is gaining users as employees telework.

The Dow Jones Industrial Average (^DJI 0.00%) couldn't make up its mind on Thursday. The index opened lower, surged to positive territory, then retreated back into the red. At 11:05 a.m. EDT, the Dow was down about 0.4%.

The market is jittery as the U.S. considers a bold stimulus package to help people get through the novel coronavirus pandemic. The U.S. House of Representatives released a plan Wednesday night that called for at least $2,000 in direct payments per month for every adult, $1,000 in direct payments per month for each child, and a suspension of all consumer and small business credit payments.

In terms of individual stocks, Disney (DIS 1.84%) and Microsoft (MSFT 1.07%) showed some strength on Thursday. Disney could benefit from increased usage of streaming services, while Microsoft is already benefiting from more people working from home.

Disney could benefit from streaming boom

Entertainment giant Disney is heavily exposed to the novel coronavirus pandemic that's gripping the United States and many other countries. Disney closed its Florida and California parks last week, and it delayed various film releases. On top of all that, Disney's ESPN may lose hundreds of millions of dollars of advertising revenue. 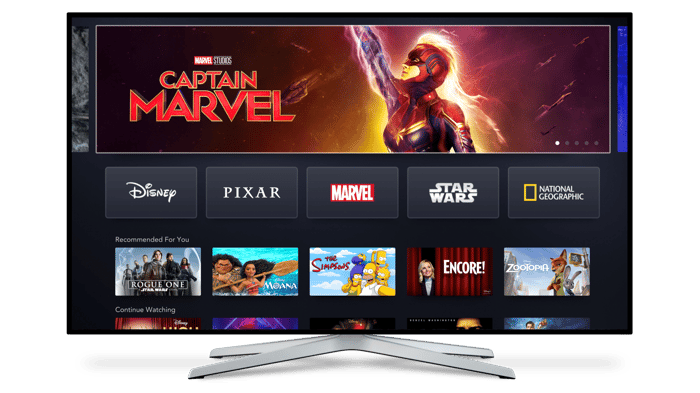 While many of Disney's businesses will suffer, the company's Disney+ streaming service will likely benefit from increased streaming usage. Already, TV use has increased in areas hit hard by the virus. In the Seattle area, TV use rose 22% on March 11 from the week before, according to data from Nielsen.

As people's finances are strained by the economic impact of the pandemic, the phenomenon of cord-cutting could accelerate. That will hurt parts of Disney's business, but Disney+ could see an influx of new subscribers, especially since the service is inexpensive at just $6.99 per month.

Creating new content during this time will be difficult: Disney temporarily halted production of live-action films last week due to the outbreak. But Disney+ includes a large catalog of quality content, including The Simpsons, Pixar movies, and Marvel content.

Disney stock was up 5.5% in the morning as the broader market fluctuates between gains and losses. While Disney will be hit hard by this crisis, the stock's steep decline so far already prices in a lot of pain.

Microsoft stock was up about 2% Thursday morning. Part of the reason for the gain could be the recent performance of Microsoft Teams, the company's communication and collaboration software.

The tech giant announced on Thursday that Teams has surpassed 44 million daily users, with that metric growing by 12 million in just the past week. Teams competes with Slack as well as Zoom, both of which are seeing increased usage as more people work from home. Microsoft benefits from the fact that Teams is bundled with its Office 365 productivity suite. For businesses already subscribed to certain Office 365 plans, Teams is included for no extra charge.

Microsoft has already warned about a negative impact from the pandemic. The segment that includes Windows, devices, and gaming will fall short of previous expectations in the current quarter, and it's possible other segments will be hit by the escalating crisis. However, Microsoft products that enable remote work and collaboration should perform well during this time.

Shares of Microsoft have outperformed the broader market since this crisis began, although the stock is still down about 23% over the past month.