Please ensure Javascript is enabled for purposes of website accessibility
Log In Help Join The Motley Fool
Free Article Join Over 1 Million Premium Members And Get More In-Depth Stock Guidance and Research
By Donna Fuscaldo - Updated Mar 2, 2020 at 8:32AM

The stock has been under pressure since the tech giant issued a COVID-19-related warning last week. But the pain should be short-lived.

Following in Apple's (AAPL -1.92%) footsteps, Microsoft (MSFT -0.40%) lowered its revenue target for the current quarter as a result of concerns over adverse effects from the novel coronavirus outbreak.

The software giant warned it doesn't expect to meet its fiscal third-quarter revenue guidance for its More Personal Computing segment. That unit is home to Microsoft's Windows operating system, its devices including Microsoft Surface and PC accessories, and gaming including Xbox hardware and Xbox services.

At the end of January, Microsoft had forecast the segment to bring in revenue of between $10.75 billion and $11.15 billion for the current quarter. That range was wide -- to reflect the uncertainty brought on by coronavirus -- but clearly not wide enough.

"Although we see strong Windows demand in line with our expectations, the supply chain is returning to normal operations at a slower pace than anticipated at the time of our Q2 earnings call," Microsoft wrote in a press release last Wednesday announcing the new guidance. The other components of its Q3 forecast remain unchanged. 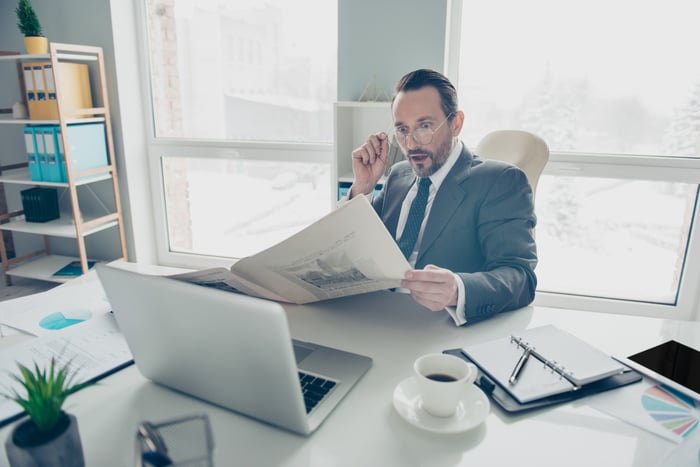 Fear is driving the markets

Microsoft's warning was enough to spook already-jittery investors who have been panicking about the impact that the COVID-19 epidemic will have on the global economy. With cases spreading to the U.S. and Europe, and Japan closing schools for a month, real fear among investors has set in. That fear resulted in the Dow Jones Industrial Average suffering its single biggest percentage drop ever. It also comes a week after Apple issued a warning for its fiscal Q2, citing a slowed ramp-up of production after the Chinese New Year holiday due to coronavirus. Apple said at the time demand outside of China is tracking in line with expectations.

Microsoft's warning didn't sit well with investors. Shares were off as much as 11.6% following Wednesday's revised guidance announcement, before recovering somewhat by the end of Friday trading to be down just 6.3%. But Microsoft still has a market cap of $1.23 trillion even if most of the gains for the year have been wiped away. Prior to the bloodletting, shares of Microsoft were up 17% in 2020.

The warning also weighed on PC stocks which got a further blow when International Data Corp. (IDC) lowered its PC devices forecast, predicting overall shipments will decline 9% this year. IDC cited the end of life for Windows 7 and the coronavirus outbreak for the lower outlook. "Many critical components such as panels, touch sensors, and printed circuit boards come out of these impacted regions [in China], which will cause a supply crunch heading into Q2," wrote Linn Huang, research vice president for devices and displays at IDC.

Microsoft's pain should be short-lived

Fear, uncertainty, and dread can sum up investors' feelings across the board, but when it comes to Microsoft, all of the pain caused by the novel coronavirus should be short-lived. After all, the outbreak isn't impacting its core growth driver, cloud computing. Nor is demand falling off a cliff. Just like with Apple, Microsoft's warning was prompted by supply issues rather than a demand problem.

On the cloud front, Microsoft has been carving out a big business and enjoying high-double-digit growth that shouldn't disappear because of the COVID-19 outbreak. For fiscal Q2, Azure cloud revenue was up 62%. Then there's the end of life for Windows 7. Microsoft is no longer providing support for the operating system, which is forcing upgrades to Windows 10. That shift could drive a quick recovery in the computing segment once supply constraints in China ease.

That's also the assessment of some of Wall Street's Microsoft bulls who were out in force defending the software giant on the heels of the warning. Credit Suisse predicted a quick recovery due to strong demand. The Wall Street firm has a $190 price target on Microsoft, implying shares could gain 20%, recouping the losses and then some. Meanwhile, JPMorgan Chase pointed out the More Personal Computing segment is the least important for Microsoft and that all the other businesses aren't being hurt by the coronavirus outbreak. JPMorgan maintained an overweight rating on Microsoft and a $200 price target.

Without a doubt, investors should brace themselves for more declines in shares of Microsoft as the coronavirus rages on. But for investors with a longer-term view, holding on to this software giant or taking advantage of weakness should prove to be a smart move in the months to come.