The coronavirus isn't going to spare this tech giant.

Tech companies like Facebook (META 0.07%) may not be the first ones you think of being hurt by COVID-19, but it may see a huge impact from the virus. Sure, people will continue to log on to Facebook to connect with friends and family, in some cases as much as 50% more than before. But that's not how Facebook makes money.

At the end of the day, it's an advertising-driven company: 98% of its revenue comes from advertising, and there's no indication that will change. So if advertising dries up in the next few quarters, it makes sense that Facebook would feel the brunt of that cutback. And there's reason to believe the cutback in Facebook spending may be worse than elsewhere. 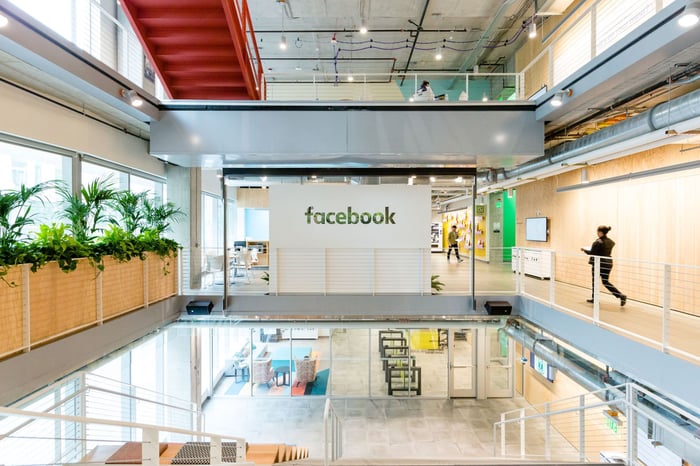 According to a survey by the Interactive Advertising Bureau, 24% of respondents had paused all advertising spending for the first and second quarters of 2020, and another 46% had reduced spending over that time. The company said that traditional media is already down 39%, with digital ad spend down 33%.

Social media rival Twitter (TWTR -3.72%) recently pulled its first-quarter revenue and earnings guidance and indicated that results will be worse than previously expected. Michael Levine of Pivotal Research estimated that March would be down 35% to 40% for Twitter, and the second quarter may not be much better.

We'll know in the next few weeks how much social media spending has been affected by COVID-19, but we can assume that revenue will be down while engagement (and costs) will be up. But that's not why I'm worried about Facebook in particular.

What makes Facebook unique in the advertising space is that it's built for smaller businesses. It doesn't take a large ad spend to get in the door, like it would with TV or radio; a few dollars for an ad can have an impact for a small business. During the fourth-quarter 2019 conference call with investors, Mark Zuckerberg said that more than 140 million small businesses use Facebook's services, and while the company didn't disclose how many are advertising with Facebook, it's safe to say it's well into the millions.

The hardest hit by the COVID-19 pandemic are likely to be small businesses, which don't have the finances to survive months of being shut down. Restaurants, movie theaters, and other small venues that used Facebook to reach customers will no doubt be cutting back their spending. Small retail shops or product makers will also be saving every dollar they can. The impact will be widespread, with Karen Mills, the former head of the Small Business Administration, saying "maybe 20%, even 30% of small businesses could fail even in a good scenario."

Not only will closed small businesses no longer be advertising on Facebook, but they also won't be driving up the price of ad auctions. Less demand means lower prices, and the impact could last for years.

Don't expect a quick bounce back

If you think about Facebook as an advertising business with small businesses at its core, it's easy to see why I think investors should be pessimistic. Advertising is fundamentally a supply-and-demand business, and all evidence says that demand is going to be down big in the short term. And I think Facebook will be particularly affected by the (likely) long-term reduction in the number of small businesses advertising on its platform.

COVID-19 is affecting business in strange ways, and don't think that Facebook and other technology stocks won't feel some of the pain that's going around the world's small businesses right now.