Please ensure Javascript is enabled for purposes of website accessibility
Log In Help Join The Motley Fool
Free Article Join Over 1 Million Premium Members And Get More In-Depth Stock Guidance and Research
By Maxx Chatsko – Apr 1, 2020 at 6:51AM

Success in clinical trials doesn't guarantee success on the market.

Investors know that drug development is an expensive and risky endeavor. Most drug candidates fail clinical trials, which is why the direct research and development necessary for each drug candidate that finally makes it to market costs hundreds of millions of dollars. That makes successful drug candidates exceedingly rare and valuable assets, especially for development-stage pharmaceutical companies that lack product revenue.

Yet while most discussions about drug development consider late-stage clinical trials to be the ultimate end goal for investors, the reality is a little more complicated. Successful outcomes in phase 3 studies don't guarantee success on the market.

Investors have found this out the hard way with Puma Biotechnology (PBYI 3.28%), Aerie Pharmaceuticals (AERI 0.27%), and Rigel Pharmaceuticals (RIGL 0.88%), among others. Can investors glean any patterns from these case studies so they know how to avoid -- or mitigate -- these mistakes with the pharma stocks they own? 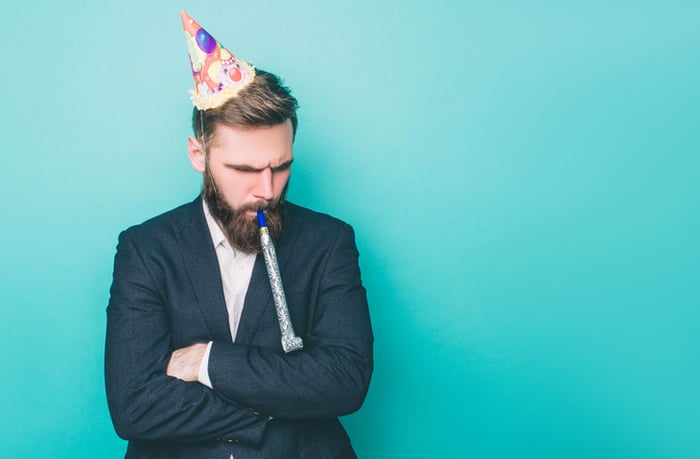 Tripped up by ramp up

Puma Biotechnology earned initial marketing approval for Nerlynx (neratinib) in July 2017. The U.S. Food and Drug Administration (FDA) approved the drug for use as an extended adjuvant treatment in individuals with HER2 breast cancer who completed treatment with Herceptin. Wall Street analysts estimated the drug could generate peak annual sales of $1.25 billion if it earned additional approvals in other treatment settings.

However, to arrive at those peak sales projections, analysts had to ignore notable concerns for the drug. Neratinib was originally owned by Pfizer, which abandoned development after the drug candidate delivered a statistically significant yet underwhelming survival benefit, while also giving 40% of individuals in clinical trials severe diarrhea. The asset then bounced from Wyeth to Puma Biotechnology before earning a surprise approval from the FDA.

Despite initial success, Nerlynx ultimately succumbed to the same concerns Pfizer and outside doctors had about its side effect profile. Full-year 2019 product revenue grew just 5% from the year-ago period as the company struggled to overcome a high rate of discontinuations. The company has reduced operating losses and might have found a drug combination to significantly reduce severe diarrhea, but it has tumbled to a market valuation of only $350 million.

Aerie Pharmaceuticals has disappointed investors for different reasons. The company earned regulatory approval for its first glaucoma drug, Rhopressa, in December 2017. A second, Rocklatan, earned approval in early 2019 for more severe cases, and boasts a novel (and promising) mechanism of action. Analysts expected the drugs to earn combined peak annual sales of over $1 billion as the best options in a fragmented eye-care market.

The early sales trajectory has been discouraging, however. Aerie Pharmaceuticals initially expected full-year 2019 product revenue of at least $110 million, but ultimately achieved just $70 million. Consolidating the market opportunity in a highly fragmented market has proven challenging. Major insurance programs have been slow to coalesce around Rhopressa and Rocklatan, which has led to slow adoption by doctors hesitating to financially burden patients.

The situation has been improving. Management is still aiming to grab a 40% market share in glaucoma treatments, and now expects full-year 2020 product revenue of $100 million to $110 million, but the business has seen its market valuation fall from over $2 billion to just $600 million.

Tavalisse was approved to treat a rare immune disorder. While analysts expect the drug to achieve peak annual sales of just $300 million, that would be a significant achievement for the small-cap pharma company. But quarterly sales totals have consistently missed Wall Street's expectations. There were signs of improvement at the end of 2019, although investors are taking a wait-and-see approach at the moment.

All three companies initially excited investors by earning their first marketing approvals from the FDA, only to disappoint on the ensuing market launches and sales ramp ups. It was painful for investors, even before the coronavirus pandemic in March forced investors to turn away from riskier investments.

There's plenty more context and nuance for each of these case studies than could be adequately discussed here. Nonetheless, here are several key takeaways for investors:

These takeaways might be taken into consideration for investors in many other development-stage pharmaceutical companies. Here are a few examples.

Successful phase 3 trials aren't the end of the road

Nerlynx, Tavalisse, and the duo of Rhopressa and Rocklatan can still find success and live up to (or come close to) their original potential. But each has encountered setbacks that, in hindsight, probably could have been given a little more attention by investors.

The important thing is to realize that success in the clinic doesn't guarantee a successful market launch. Luckily, there are some patterns to the obstacles that beset development-stage companies making the transition to commercial operations that individual investors can be on the lookout for when investing in the space.